The essential discontinuity between Marx’s Grundrisse and Capital is that, in the latter, we can witness a “basic shift in the concept of theory, from one of counterposing one’s theories to those of other theoreticians, to that of watching the birth of theory emerging out of the developing class struggles.” In Capital, a new dialectic is worked out, for there is no more separation between theory as “analysis of objective reality” and theory as the self-movement of subjects overcoming contradictions and so becoming freer: “The method of analysis is [in Capital] nothing other than the process of development of essential relationship of subject to object” (“A concrete universal: Marx’s Capital,” July-August N&L).

WE ARE NOT A GAME 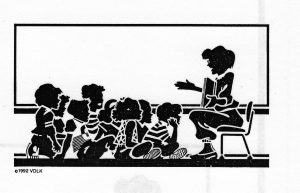 I tutor former foster kids in high school through a non-profit that receives private grants in order to pay tutors hourly wages. The non-profit packs its student caseload to get as large a grant as possible. (If they don’t spend it all, they get a smaller grant the next year.) In the middle of last semester, the non-profit overspent its grant and announced they would need to cut several students and drastically reduce the hours of many more. Naturally, the dirty work of breaking this news to students and parents was left for the tutors, who simultaneously digested a steep cut in pay. The worst part is my students were treated like game pieces to be shuffled around. They have enough instability in their lives without the fickleness of philanthropy and those who manage it.

I am greatly encouraged by the UN’s recent creation of a comprehensive treaty that bans all nuclear weapons everywhere in the world. Long overdue, it was created and endorsed by 122 nations and needs only the ratification of 55 to become official. In light of the increasing tensions between the U.S. and Russia and the U.S. and North Korea, the danger of a nuclear holocaust is greater than ever. This may be our last chance to evolve toward a new chapter in human history: the ending of all wars and meaningless destruction and the beginning of a truly human world of happy, celebrating and joyful people.

Three peace groups in Chicago chose the Henry Moore Sculpture at the University of Chicago campus to remember Aug. 6 and 9 as the 72nd anniversary of the atomic bombing of Hiroshima and Nagasaki. About 200,000 people were killed by two split-second explosions and their aftermath. Speakers surveyed the nuclear project, past, present and future, from the anxiety experienced by biological inheritors of the possible DNA changes caused by radiation, to the recent treaty to ban nuclear weapons; and from the spread of radiation from the meltdowns and hydrogen gas explosions at Fukushima to Thích Nhất Hạnh’s “Discourse On Love.”

As a prisoner in California’s Department of Corruption and Recidivism for many years now, I’ve witnessed first hand how change can happen, when people come together, put aside their differences and misconceptions, decide that what’s wrong for one is wrong for all. The hunger strikes I participated in, along with the “Ashker” settlement, have led to vast changes within this system. But I fervently hope and pray that we don’t become blinded and complacent. These people don’t play fair! Even now, insidious changes are occurring. Just look at the meals being served now. The bare minimum, if that, at this prison are now the norm.

the prison system and cause a wage war over an invisible dream of privileges and approvals. Inmates are divided between aggravated and non-aggravated sentenced inmates. Agg inmates qualify for parole after 50% of their sentence is completed—compared to 25% for non-agg—therefore receive 50% good/gain time as long as that inmate works for the prison industrial complex. The prison system pits the non-agg against agg inmates, causing a wage war between inmates—the wage being parole. An agg inmate who refuses to work is placed in administrative confinement/segregation for no less than six months and a non-agg inmate is then placed for that job position. It seems the non-agg inmates are the reserve of the wage army Marx mentions.

Like an 1850s Alabama plantation owner crying about his escaped slaves, the Pueblo County Jail administration is bemoaning the fact that it has lost its prisoner workers. The Pueblo Chieftain reported that the closing of the jail’s work release center has caused the agency to lose “$341,428 worth of free labor.” No more prisoner slaves to cook and clean or to be farmed out to “nonprofit agencies, city and county governments, and local churches.” The American people never question the ethics of the Constitutional approval of slavery via the loophole in 13th Amendment—unless their asses get grabbed by the fascist legal system, and then it is too late.

I am an inmate serving a two-year sentence at a privately owned for-profit jail. I am a lifelong pagan and minister ordained by the Universal Life Church, writing to expose this jail’s religious discrimination. This jail will not allow Muslims, Jews, pagans, Wiccans, or any other faith groups to gather in the chapel for faith/study groups. However, they do have church service for Christians once a week led by the chaplain. A number of the officers and staff, including the chaplain, make disparaging statements about my faith, Muslims, and any faith other than their own. I have sent a formal complaint but this jail has a history of witness intimidation and putting inmates that file complaints into segregation and other forms of retaliation. Please send a letter of support to Meherrin River Regional Jail, PO Box 189, Alberta VA 23821 c/o Lt. Townsend.

As one of capitalism’s most unfortunate metaphors, I witnessed something that goes hand in hand with so-called freedom and democracy. That was the gassing and cell extraction of a fellow prisoner on the most exciting and wonderful day this country celebrates, the Fourth of July—in a society that showcases its virtues on the enslavement of its captives.

I would like to receive N&L. I am trapped in the Texas prison industrial complex and would like to better educate myself so that upon my eventual release I will be better armed to fight the system.

TO OUR READERS: Can you donate $5 for a prisoner who cannot pay for a subscription to N&L? It will be shared with many others. A donation of $8 pays for a subscription plus the Pelican Bay Hunger Strikers pamphlet to be sent to a prisoner.  CLICK HERE to subscribe.  Prisoners are eligible to continue their free subscriptions when they first get released, a time when the system tries to make them forget the struggle.