As we go to press, in Afghanistan the Taliban are murdering men who helped the U.S., UK, and other forces who fought them; and murdering and beating women and girls who have made even marginally independent lives for themselves. They are threatening death to families of Afghan men who fought in the Afghan army or in any way served U.S. and other forces if they don’t turn themselves over to them. There can be no illusions about the Taliban, whose promise to rule by sharia law is a promise to impose a ruthless dictatorship over every aspect of people’s lives. They did it before and are lusting to do it again and have already begun. In the most violent of ways they never stopped in all the 20 years the U.S. was pursuing its own narrow interests in Afghanistan. 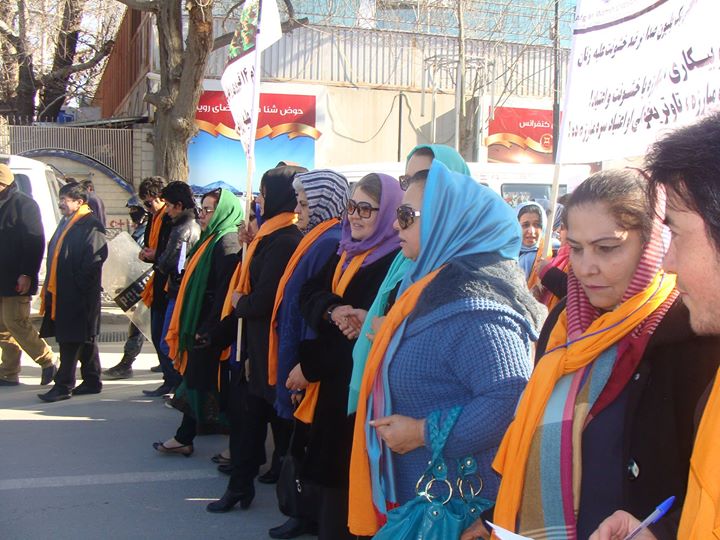 Afghan women demonstrate on Feb. 13, 2014, in Kabul showing their opposition to violence against women. They chant: “Justice! Justice!” and “No more violence!” Photo by Afghan Women’s Network, www.afghanwomensnetwork.org.

Donald Trump’s deliberately feckless “negotiations” with the Taliban were always a lie, as the Taliban continued to murder hundreds of women with public lives like reporters, lawyers, judges, policewomen and activists. While U.S. rulers lie some more about “waiting to see” what the Taliban will do—as if the whole world doesn’t already know—Afghans are living in terror and dread. There is a reason that about “80% of the displaced people pouring into Kabul and other cities are women and children.”

Yet, despite the terror, the beatings with rifle butts and clubs, the shooting into crowds and subsequent deaths, Afghans, including—or more accurately, especially—women continue to demonstrate against Taliban rule. In Kabul and other cities, people used Aug. 19, a day traditionally used to celebrate Afghanistan’s 1919 independence from British control, to demonstrate against the Taliban. Hundreds marched in Kabul to the presidential palace waving the Afghan national flag and shouting “our flag, our identity!” The Taliban flag in Abdul Haq Square was torn down by a protester and the national flag was put in its place. Four women in Kabul stood on a busy street with their protest signs for all to see. They chanted against the Taliban’s deadly misogynistic interpretation of sharia, saying: “Sharia law gives us the right to work and study and be educated!”

Similar demonstrations took place in other parts of the country, including in Asadabad in Konar province, in a demonstration that appeared to be led by women. The Talban shot into the crowd, killing several protesters.

These are the protests that the press was able to report. There is no doubt that there were many more. In fact, for 20 years and decades before, it has been Afghan women who have been the ones to fight for a freer reality. That is why Kimberley Motley, a U.S. human rights lawyer  working in Afghanistan for 13 years, was outraged with President Biden’s self-serving statement that Afghans are “not willing to fight” the Taliban. “That’s so insulting to say, especially for women,” she said, adding, “How dare anyone think that they’re not willing to fight just because [they’re] not going on a battlefield.”

The truth isn’t so much that Afghan people aren’t willing to fight for their freedom as it is that the U.S. in two decades never fought for the freedom of the people whose land they invaded. While on Nov. 16, 2001, President George W. Bush’s wife, Laura Bush, condemned in a radio address to the nation, “the severe repression against women in Afghanistan,” and “the fight against terrorism is also a fight for the rights and dignity of women,” that was never why the U.S. occupied the country.  As Kim Berry wrote in her 2003 article, “The Symbolic use of Afghan Women in the War on Terror”: without a “critical analysis…we run the risk of using Afghan women as symbols and pawns in a geopolitical conflict, thereby muting their diverse needs and interests and foreclosing the possibility of contributing to the realization of their self-defined priorities and aspirations.” Exactly.

The inhuman disregard for the actual citizens of Afghanistan held by a succession of U.S. administrations, including the current one, is revealed in how they have refused to help Afghans who aided the U.S. forces, thus putting their lives and the lives of their families in danger. For years Afghan translators, drivers, cooks, cleaners and builders have been begging for visas to allow them to escape from Afghanistan and the death by the Taliban that awaits them if they stay. The U.S. made it as difficult as possible for them.

In the words of a young U.S. activist who visited Afghanistan: “For the last decade, the U.S. embassy has mainly preoccupied itself with being a visa rejection factory, including for people who directly helped the U.S. Today’s turning of the cold shoulder is not a new feature. If the headache of gathering mountains of paperwork wasn’t a sufficient obstacle, at the visa interview the embassy staff antagonize, yell and scream in summarily rejecting the visa. Others begin by saying they’ve already approved the visa, then deflate the person’s dignity when revealing their own lie.”

THE CATCH-22 OF THE VISA DEBACLE

In truth, the U.S. purposefully created a catch-22 situation for those who helped the U.S.  who are now trying to flee Afghanistan.  As Melanne Verveer and Tanya Henderson explain, writing for The Washington Post: “Hundreds of women journalists, activists and judges have been assassinated in recent years. Unless evacuated, many more are poised to become Taliban victims….The State Department announced an expansion of the U.S. Refugee Admissions Program on Aug. 2 through a Priority 2 (P-2) designation. The new category provides at-risk Afghans who are not eligible for Special Immigrant Visas an opportunity to permanently resettle in the United States.

“However, it remains almost impossible to access the Refugee Admissions Program….U.S. refugee admissions guidelines require applicants and their eligible family members to relocate to a third country—at their own expense—before their cases can even begin to be processed. Visas are difficult for Afghan women activists to come by in the best of times. With the twin disasters of COVID-19 and war now raging across Afghanistan, most countries have ceased offering visas altogether.”

Biden can pontificate about getting out “every American,” but his inhumanity to the people of Afghanistan show his true measure. What is clear now is that through over 40 years of war the Afghan people have shown a tremendous resiliency. Since they cannot expect any help from the U.S. government, the solidarity of all those in struggle and those of us in the U.S. in particular is more important than ever.