It should shock no one that the Taliban takeover has resulted in “mounting human rights violations against the women and girls of Afghanistan,” according to the UN Secretary-General. As Taliban forces swept through the provinces, they went to the jails and released thousands of male prisoners convicted of domestic abuse who are now free to enact retribution on the women who sought justice and the judges who sentenced them, many of them also women. 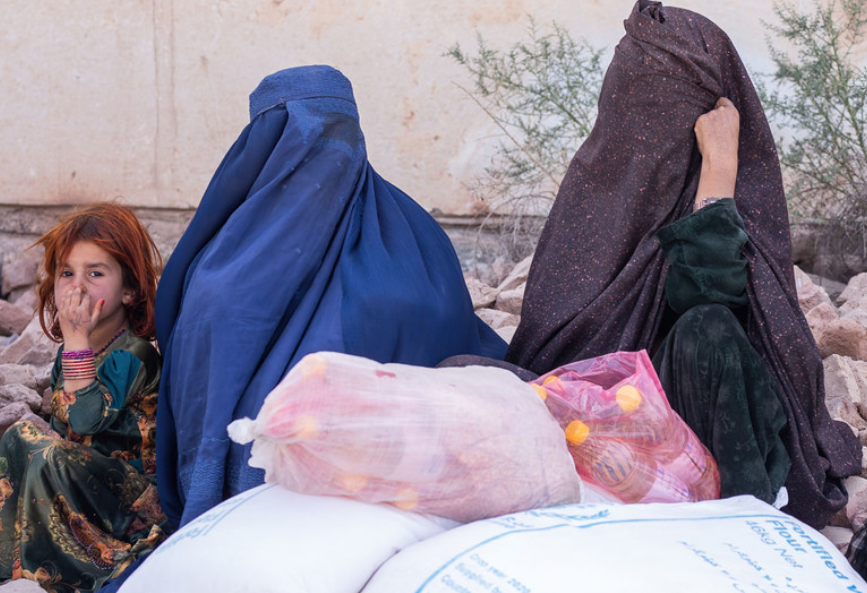 After the Taliban take over, women and children line up for food aid as food supplies dwindle. Photo: United Nations

Taliban rule has completely overturned the Afghan judicial system. According to Al Jazeera, property is being confiscated from one family and given to another, on the whims of shuras (local councils). Ethnic minority Hazaras are targeted by Taliban officers, beaten and robbed of their assets. Whole families are evicted onto the street as a deepening drought and flailing economy cause food insecurity. Girls’ secondary schools have been closed, and adult women are told not to leave home without a male relative, although, for now, the Taliban make an exception for women doctors and nurses working in the essential healthcare sector.

It was acceptable to just about the whole world that this was going to happen.

In 20 years of war and occupation and over four U.S. presidents, the U.S. betrayed all erstwhile promises of an Afghanistan “Marshall Plan” and surged troops and money into what can only be described as a terror campaign where more than 47,000 civilians were killed in night raids, or by 13,000 air strikes, or by massive ordnance air blasts. Five million people had already lost their homes even before the August regime change caused a frantic exodus.

On Sept. 30, as would-be evacuees lined up at consular offices, U.S. Senator Tom Cotton introduced a budget amendment to cut off all assistance to Afghan refugees. It failed by a single vote. Elsewhere, Iran continues their policy of shooting Afghan migrants in the legs, while 1,400 miles away Turkey has increased the number of border agents on their southeast border.

It is not as though any world government lifted a finger to support independent Afghan women and men who wanted to create a new society in the shell of the old. Instead, the U.S. government empowered individuals who would then be in their debt and would enact policies to enrich global capitalists. Iranian, Chinese, and Russian state-capitalists are poised to do the same as they are expected to bestow on the Taliban the legitimacy of official recognition.

On the legitimacy front, Afghan women’s rights activists converged at the UN in New York on Oct. 21 to ask the General Assembly to vote against admitting a Taliban representative to that body. Former Afghan politician Fawzia Koofi stated that women “are talked a lot about, but we are not listened to. Aid, money, recognition—they are all leverage that the world should use for inclusion, for respect to the rights of women, for respect to the rights of everybody.”

So far, the U.S. Left has not managed wide popular support for such an agenda. Worse, it has seemingly been unable to even agree that the rise of the Taliban is a bad thing, and the ones who can’t agree are predictably silent on women.

Taliban soldiers are pounding on Afghans’ doors and forcing the men to go back to work. The Taliban are not fighting against alienated labor and are fine with the law of value operating in their regime. Like Mao Zedong, who in 1949 ordered Chinese factory workers: “Don’t stop working,” the Taliban expects Afghan people to produce value for their regime, one that doesn’t make much pretense of preserving their human rights and interests.

The Taliban are forcing women to disappear from public life and accept abuse. Afghanistan’s people, agents of history, are not known for capitulating long to injustice.

← Women of color brought R. Kelly to justice
From the Writings of Raya Dunayevskaya: Automation and the New Humanism →
This work is licensed under a Creative Commons Attribution-ShareAlike 4.0 International License