Protests of George Floyd’s murder and police brutality in general have erupted all over the Chicago area—from demonstrations so huge and militant that Mayor Lori Lightfoot felt compelled to stop all public transportation and close streets leading into the heart of Chicago, to marches in the smallest suburbs and neighborhoods. Below are reports of only a few. 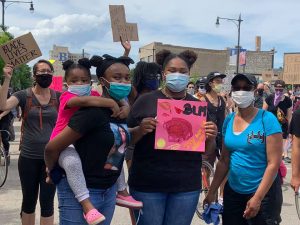 On June 5, hundreds showed up at a rally in Chicago’s Uptown neighborhood for EMT worker Breonna Taylor. It was called only the day before. Taylor was a 26-year-old Black woman living in Louisville, Ky., whom plainclothes police murdered when they busted down her door serving a “no-knock warrant” in the dead of night. They pumped eight bullets into her as her boyfriend tried to protect her by throwing his body over hers.

At the “Say Her Name” rally there were a couple thousand people and it was pretty diverse in terms of race, class and LGBTQ people—a nice Chicago crowd. It reminded me of why I love Chicago. The majority there were women.

The event was started by Ashabi Owagboriaye, who put a notice on Facebook. At the rally she said:

“Once people are done with us they pretend that they don’t know us, forget all the atrocities they have acted upon us and then act as if we’re the ones at fault for speaking out because we’re angry….I don’t think you understand how exhausting it is to keep seeing stories about Black women getting hurt and then no longer hearing about them as if they were not even part of our lives.” 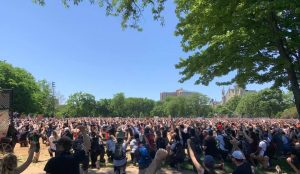 June 6 saw a huge anti-racist rally and march in Union Park on the West Side. There were easily more than 10,000 there. It went from militant chanting to parading back and forth.

After the rally people marched down to the old Cabrini-Green housing project, where there were salt trucks and National Guard tanks blocking roads, protecting the gentrified area. They’d been there for a week. The next day there were two police boats on the river! For what? That’s crazy.

The mayor ordered all the freeway exits and entrance ramps blocked from way north, through all of downtown, to way further south. My sister couldn’t get off the expressway. She saw a lot of military tanks. They’re not there to protect protesters or free speech. They are there to prevent it. I saw nothing but van after van after van filled with police. But despite that police and military presence, thousands of people showed up anyway, even if it took longer to get there.

On June 7, I went to a protest in Lincoln Square on the North Side. It appeared to be huge, several hundred at least. It was so big that I couldn’t get through to the park. We saw people lined up on Montrose, down Lincoln to at least Sunnyside. After the rally, protesters marched from Lincoln Square to Wrigleyville to hold a sit-in outside the Chicago Police Department’s 19th District station. There was no planned march, so this was spontaneous.

Since May 29, there have been ongoing demonstrations sparked by the outrage over the police murder of George Floyd. They spread throughout the many San Francisco Bay Area cities, including ones not especially known for activism like Walnut Creek. Many demonstrators, chanting “I can’t breathe” or “Hands up, don’t shoot” as police lines formed around them, highlighted the pervasive and regular police terror against unarmed Black people on the streets. 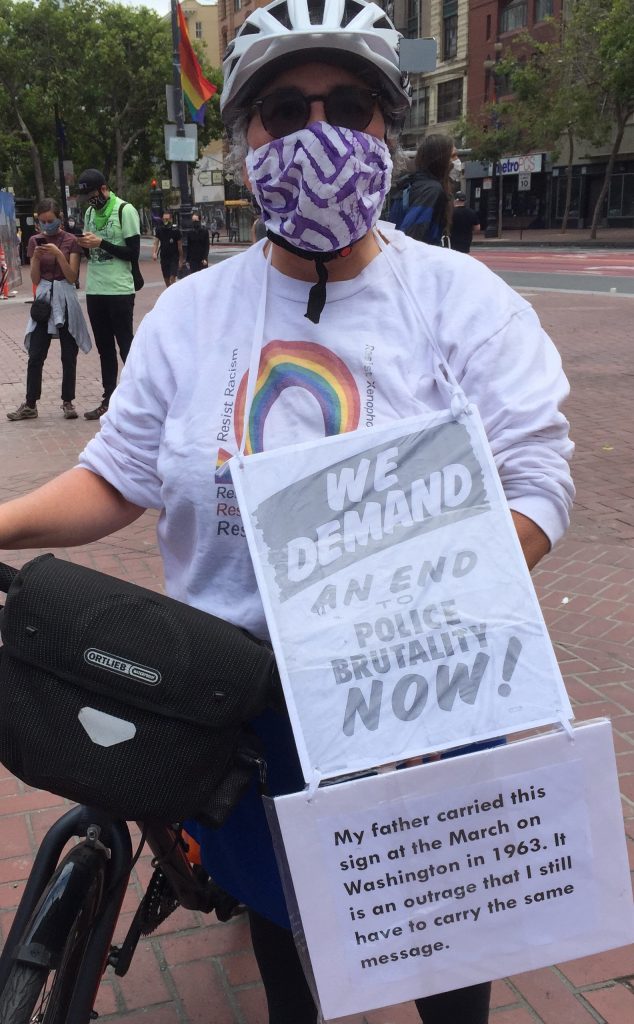 A crowd of several hundred gathered in San Francisco on May 30. People were very sober and their signs projected many aspects of the horror of this moment as well as how each one was asserting their individual responsibility. They showed respect for others by taking precautions against the other imminent danger of COVID-19.

A deep sense of history was present throughout. One woman carried a sign, “We demand an end to police brutality now!” which her father had carried during the March on Washington in 1963. She said, “It is an outrage that I still have to carry the same message.” Another cited Martin Luther King, Jr., “A riot is the language of the unheard.”

The many “Black Lives Matter” signs reflected ways in which people expressed its universal meaning, like “white silence = violence.” This harkens back to AIDS activists’ slogan “Silence = Death” as well as struggles against domestic violence. Others said, “An injustice anywhere is a threat to justice everywhere” and “I don’t wait ’til it’s someone I know.” Yet another Black Lives Matter sign read “Still we rise.”

The universality of the message was not contained within U.S. borders. People carried signs in Arabic. Some signs read, “From America to Palestine: abolish police, prisons and the state” and “Police brutality = state terrorism.”

The revolt is challenging the capitalist system from the perspective of people asserting their right to live. Many have been pushed over the edge since the pandemic. They already had either a precarious connection to living through a low-wage job or had been totally discounted and left to fend for themselves on the street.

This San Francisco demonstration, as many others around the country, persisted into the evening when many went on their own spontaneous “shopping spree.” One of the signs in the afternoon caught the totally inverted inhuman character of the present moment: “Vote out the looter in chief!”

← Thoughts from the outside: Capitalism and looting
Readers’ views: July-August 2020, part 2 →
This work is licensed under a Creative Commons Attribution-ShareAlike 4.0 International License