Bruno Latour’s new book Down to Earth: Politics in the New Climatic Regime (Polity Press, 2018) is the latest example of what happens to radicals who give up on social revolution. At its heart is an ambivalent identification of Earth as the agent of change, instead of humanity or, more precisely, social groups who can act as subjects of revolution. 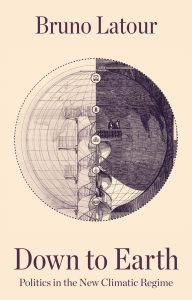 Latour superciliously dismisses the actual history of revolution and counter-revolution along with all modern political history as a one-dimensional back-and-forth along what he calls a “vector” between the Local and the Global.

This abstraction serves to lump revolution together with counter-revolution that dialectically emerges from within it, so that socialism can implicitly be equated to state-capitalist “Communism” and social democracy.

Latour believes he has discovered the magic key to unlock history and escape this vector, by introducing a third “attractor” called the Terrestrial, which is a “new political actor….an agent that participates fully in public life” (pp. 40-41; all italics in quotations are in the original).

The concept of the Terrestrial is hazy. Introduced as more or less James Lovelock’s Gaia (p. 40), or the earth as an active planetary system, it morphs into a certain political program and attitude, an analysis that substitutes a “system of engendering” for “systems of production” and “dependence” for “freedom” (pp. 82-83).

To Latour, history has dramatically entered “the New Climatic Regime.” He declares the denial of climate change to be the key to important political trends, which are all “responses…to the powerful reaction of the Earth to what globalization has done to it” (p. 21).

Latour evades the difference between agent and Subject by never mentioning the latter. A carbon dioxide molecule emitted from a smokestack is an agent contributing to global warming. But a conscious Subject transforming reality for the purpose of liberation is quite different. However, Latour pictures non-human “terrestrials” as “protestors” and “sources of revolt” (p. 88).

He smugly contrasts his Terrestrial politics with earlier theories defined by “systems of production,” which supposedly cannot grasp non-human beings as agents. It’s no wonder that he does not identify his target, since Karl Marx made quite clear in Capital that labor is “a process between humanity and nature” and, for instance, took note of “the destructive power of natural processes.” The author instead lumps Marx in with capitalist modernizers.

The book describes its method as a “political fiction.” Vastly exaggerating the 2015 Paris Climate Agreement’s significance serves its central myth of making Earth the agent.

Dec. 12, 2015, was supposedly the day when “all the signatory countries…realized with alarm that, if they all went ahead according to the terms of their respective modernization plans, there would be no planet compatible with their hopes for development….What power then secured the signature of those 175 states, if not a form of sovereignty to which they consented to bow down and that propelled them to reach agreement? If it is not a power that dominates the heads of state…what should it be called?” (pp. 5, 84).

Latour unwittingly discloses the stubborn reality his ruse is avoiding when he lists three interconnected phenomena on page 18: “what since the 1980s has been called ‘deregulation’ or the ‘dismantling of the welfare state’; what since the 2000s is known as ‘climate-change denial’; and above all, what for the last 40 years has been a dizzying extension of inequalities.”

In fact, all three phenomena began in the 1970s, though they really blossomed in the Reagan-Thatcher 1980s. The real turning point, which Latour evades since it implicates a “system of production,” was the world capitalist crisis of 1974-75, which the ruling classes responded to with a harsh economic, political, and ideological restructuring.

But making that the key would not help Latour’s thesis that the true Subject is Earth and that the root of crisis is not the internal contradictions of capitalism but “a certain conception of ‘nature’ [that] has allowed the Moderns to occupy the Earth in such a way that it forbids others to occupy their own territories differently” (p. 64).

All this bombast leads to a most pathetic program: “What to do? First of all, generate alternative descriptions [of] centimeter by centimeter, being by being, person by person, the stuff that makes up the Earth” (pp. 94-95).

Even worse, the book’s conclusion reveals the author’s state of denial about Europe’s current political situation. In reality, the far right is making strides in the continent. (See “World in View: Rise of Far Right threatens ‘Europe,’” March-April 2019 N&L.)

In “political fiction,” Europe has “definitively given up empire” and “is not rushing to impose its own prejudices on everyone else”—so that the European “vision” of “a common world…allows us to consider an initial framework that could enable the relaunching of a diplomatic endeavor. In spite of everything, it is still Europe’s task to redefine the sovereignty of the nation-states” (pp. 100-102).

← Pipeline tragedy in Mexico
World in View: Prisoners of Rukban →
This work is licensed under a Creative Commons Attribution-ShareAlike 4.0 International License