CICS had ignored the lessons of the Acero strike, failed to see the handwriting on the chalkboard, and reacted with pure obstruction. All four schools in their system remained officially open to students, as CICS brought in strikebreakers from an outside company. But students and parents joined teachers on the picket lines, prompting CICS to order picketers off the public sidewalk and even call police on them!

At an enthusiastic rally at CTU headquarters, strikers from all four schools gave their reports from the picket lines. A picket captain at Northtown acknowledged the students who picketed alongside teachers each day.

The leader of the CICS council within CTU told how the company had stalled for four months negotiating union status for paraprofessionals. So when teachers struck, and paraprofessionals did not yet have bargaining rights, CICS told them to cross the picket line. Instead, paraprofessionals voted for a recognition strike.

Strikers at the rally listed union demands beyond wage increases, including payment of deserved retroactive pay, maternity leave, improvements in healthcare, and guaranteeing counselors and social workers. The company has been holding onto $36 million, but withholding that bounty from the classrooms. 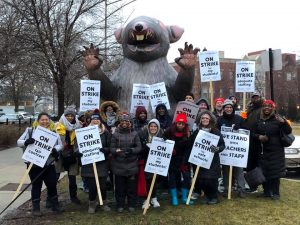 The contract that CICS had to concede addresses all those demands. It provides for pay parity with public school teachers by the end of the four-year contract, and pay parity for paraprofessionals immediately. This undercuts the business model of charter schools taking full state subsidies, but underpaying teachers.

Under the contract, teachers will have a shorter work day by slicing non-classroom duties, and better pension and healthcare benefits. The contract provides for reductions in class size and guarantees teaching assistants for kids through second grade. It pours at least $4 million back into classrooms.

Finally, the striking teachers at CICS schools, like teachers at Acero, achieved what they had insisted on: sanctuary language to protect the school’s immigrant students and families regardless of legal status.