Chicago—On a bitter cold morning on March 24, over 85,000 of us jammed into Union Park on Chicago’s west side to be part of the March For Our Lives and to join with protesters in 800 other cities across the U.S. and the world. The crowd was so large that we couldn’t all fit into the park and spilled over into sidewalks and streets. 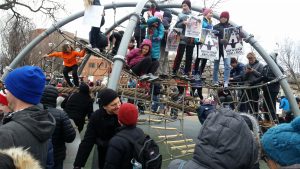 The crowd was mostly made up of children, from toddlers to teens who brought their parents with them. This was a determined group of people who, though buoyed by the huge turnout, were there to show the leaders of the U.S. that, as so many signs proclaimed: “Never Again!” or just: “Enough!”

GUN VIOLENCE TOO COMMON A REALITY

How crucial this demonstration is was seen in how many participants were friends or family of those who had died from gun violence. As one young woman, Haley, told News & Letters: 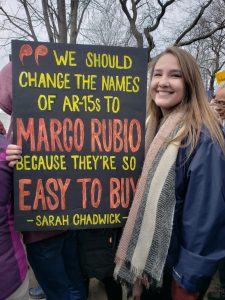 “I’m here because one of my good friends in high school was shot and killed in his home when he was in college in St. Louis, Mo., at a party. It was awful to go through it and I don’t want any other kids to have to lose their friends.” Of the demonstration she said: “This is amazing! Not only does it feel good to me, as someone who has been affected by gun violence, just to see this show of solidarity. Little kids were never involved in activism when I was growing up in the 1990s and early 2000s. To see little kids and teenagers getting involved in important causes gives me a lot of hope.”

Haley’s homemade sign reflected the widespread disgust with politicians who bow to the NRA (National Rifle Association) at the expense of human lives. Her sign quoted Sarah Chadwick, one of the students who survived the shooting in Parkland, Fla.: “We should change the names of AR-15s to Marco Rubio because they’re so easy to buy.”

A retired teacher and grandmother told us her view of Donald Trump’s plan to arm teachers: “It’s laughable. Say you’re a kindergarten teacher and you have a gun and you’ve been trained to use it, and it’s loaded. What are you going to do with it while you’re in class? You’re going to have to keep it in a closet or a locked crayon drawer, or someplace safe, because your kids can’t be allowed to access it. Logistically it’s crazy. It’s also crazy philosophically because, as my sign says, ‘Teachers’ jobs are to help kids thrive, not survive.’ There’s no protection from an automatic weapon.” 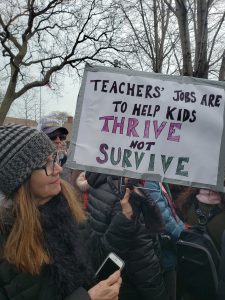 Chicago teacher with her sign at March For Our Lives, March 24, 2018. Photo: Terry Moon.

Another young woman demonstrator, Nikki, blamed Trump as well as the NRA: “Trump is a horrible thing that is happening to this entire country, but mobilizing the youth and bridging the gap between generations is one of the only good that has come out of this administration. We are teaching the establishment that we’re not just going to sit down and take it, that we are not complacent, that we will get out into the streets and fight for what we believe in. So they should be afraid; and I cannot wait to see what the future holds.”

The humanism that was evident at the Women’s Marches was also present at the March For Our Lives. The huge demonstrations, with passionate youth in the lead, showcased another dimension of the mass resistance that has erupted. Gun control, seen as a life and death issue, and midterm elections were the focus. History shows that movements seldom end where they begin; the 1905 Russian Revolution began with a march led by a priest, who worked with the police, to present a petition to the Tsar.

MORE VOICES FROM BELOW

Below are more voices from the Chicago March.

Dominique, a Black woman: “Gun control shouldn’t be an issue. No one should be able to own AR-15s. You don’t use them for hunting, they’re just fun to shoot. You know what else is fun? Getting to grow up and graduate high school! Go to college, get a job and be a regular person! But instead you live with a threat that you could be shot in your school. With my kid I have to worry about that every day. There’s a lot of gun violence on the streets in Chicago. Something needs to be done, not just cops showing up too little too late. Police need to be from the neighborhoods they police because so many are scared of the neighborhoods where they patrol. That’s a start. It’s nowhere near a solution but that’s a start.”

Young white girl: “I don’t think school should be a place of fear, and I don’t think kids should go to school wondering whether someone is going to come into their school with a gun. That shouldn’t be a possibility. I worry about that in school sometimes.” Her mother said: “She goes to Whitney Young High School in Chicago. They do all they can to protect the kids but there’s only so much you can do when there are guns out on the streets that really don’t need to be in people’s hands, types of guns that are made for war to kill gobs of people at one time.”

Another white woman: “It’s connected to all the politicians being bought out. It’s not a democracy anymore. We’ve got to get our democracy back.”

← Vendors march for their rights on International Women’s Day
Philippines: Human rights vs. Duterte’s fascism →
This work is licensed under a Creative Commons Attribution-ShareAlike 4.0 International License