Editor’s note: Mi Tu and Fa Gang, two Chinese worker-activists in the U.S. promoting their book China on Strike: Narratives of Workers’ Resistance, spoke on April 7 at a meeting co-sponsored by News and Letters Committees. Here are excerpts from their talk. 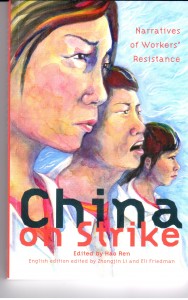 Oakland, Cal.—During our visit to the U.S. we want to meet other labor activists and exchange ideas. In China the All-China Federation of Trade Unions is the only legal trade union. Workers are automatically members even if they don’t know it, but the union is not allowed to intervene in strikes. Many migrant workers don’t have any idea of a union. Yet there are a lot of strikes!

Employers want young women 18 to 24. After China entered the World Trade Organization, the recruitment became less restrictive and there are workers of ages 18 to 40. Young workers, under 25 and unmarried, change their jobs often. Senior workers, 30-40 years old with parents and children to support, are the backbone of factory work. They prefer overtime. Because they have families, they don’t change jobs as often. They accept their social status and identity as workers.

Before 2010 typical workers in the Pearl River Delta considered a strike a break in their work because there were so many job opportunities. Strikes were spontaneous. The capitalists mostly gave in easily, offering a wage increase, and seldom suppressed such strikes severely. Our book documents many of those strikes.

Following the 2008 financial crisis a lot of factories closed. The bosses did not raise wages because there was more competition for fewer jobs. The workers were upset because the bosses made a lot of money but did not increase wages. China on Strike documents several of those 2010-2011 strikes.

In the Pearl River Delta, where the legal minimum wage is 2,000 yuan ($300) a month, many strikes since 2013 were for social insurance and compensation if a factory closed down or went bankrupt. To demand social insurance, the workers have to know more about labor laws. These strikes tend to last longer, with more conflicts between the workers and the government.

A garment factory founded in 1998 had 3,000 workers. By 2014 there were only 900 workers left, most with 15-plus years of experience. The first strike was in December 2014 for retirement and housing funds. The boss did not pay into social insurance for the workers. New worker-activists arose to organize the strike.

They went to lawyers, asking about labor law. Activists educated other workers about how the boss was breaking the law and what their rights were. They wrote up their demands, but management ignored them, which is when the workers went on strike.

On Dec. 17 the boss put up a notice that he would negotiate the next morning. But that morning there were more policemen than workers at the factory. More than 30 were arrested, and the rest went back to work. But they slowed down production. The boss agreed to give the workers going back to work a bonus of 100 yuan and to start paying into their housing fund in six years. Only 100 workers continued the slowdown and wanted to continue negotiating.

In June 2015 there was a second strike after the boss fired a woman worker. The police arrested her because she did not accept being fired and wanted to go back to work. She fell as they were arresting her and was accused of attacking the police. In July 2015 policemen came to the factory and arrested labor activists who took pictures and spoke for the workers.

The boss offered a very small amount of “comfort” money. The police told the workers that they could sign the contract or be arrested at home. Even after signing the contract, some workers sued out of anger. After the strike the factory provided uniforms for seven police departments as a “thank you” for their help.

In late December, police started patrolling the factory floor. Workers gathered at the police station asking for the woman worker to be released, but after two days of continuous protest they did not succeed. The woman was detained for four months. Other workers were detained for about a month.

Workers learn from their own experiences. Going from one factory that had a strike to another factory, they keep adding to their experience.

← One year for 29 lives!
End solitary confinement at Rikers Island →
This work is licensed under a Creative Commons Attribution-ShareAlike 4.0 International License