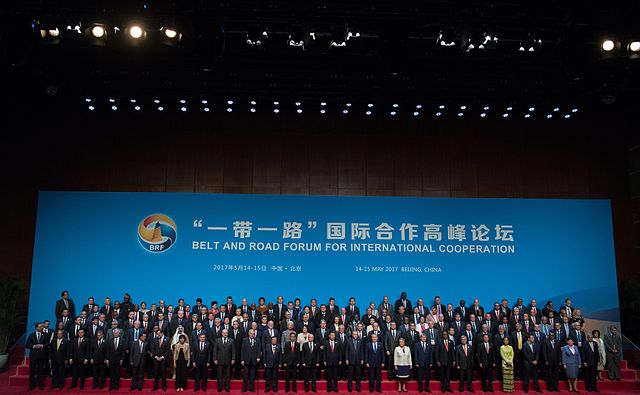 Participants of the Belt and Road Forum. Photo: wikipedia.org

China hosted its Belt and Road Forum in May as Trump, under the banner of America First, unilaterally withdrew the U.S. from the Paris Climate Accord and sowed doubts among old allies with his praise for North Korea’s Kim and Russia’s Putin. China moved to fill the vacuum created by Trump’s disengaging from Europe and Asia to dangle before assembled world leaders a trillion dollars of infrastructure investment—highways, high-speed rail, ports, bridges and energy projects—across Eurasia.

But Belt and Road is intended first to control China’s people. When the Great Recession of 2008 crushed China’s double-digit production rise, workers increased strikes and job actions, protesting theft of severance pay as factories shuttered just as wages had been driven up tenfold by strike action against both company and state power.

Massive borrowing (currently adding 15% of the GDP each year to the debt) has kept GDP growth above 6% per year to ward off revolt of the entire working class. Monumental Belt and Road construction projects would address the chronic overproduction of steel, cement and other commodities that heavy borrowing has produced.

The spotlight shone on Ivanka Trump’s line of shoes, made under conditions which would shame any family capable of shame, is a rare glimpse at the worker intimidation, extension of the working day and theft of overtime pay that are standard in Chinese factories. China Labor Watch reported that the government detained one worker-activist at that factory, and that two others were missing altogether.

Maps, even very old maps, have been the excuse for war by China, from its invasion of Tibet in 1950 and the Sino-Indian War in 1960 to China’s island building and garrisoning on coral reefs in the South China Sea. The maps linking Xinjiang to Turkey and Tibet to South Asia threaten continued repression of Uighur and Tibetan self-determination by China’s rulers.

← Readers’ Views: July-August 2017, Part 1
From the writings of Raya Dunayevskaya: A concrete universal: Marx’s “Capital”–Part 1 →
This work is licensed under a Creative Commons Attribution-ShareAlike 4.0 International License