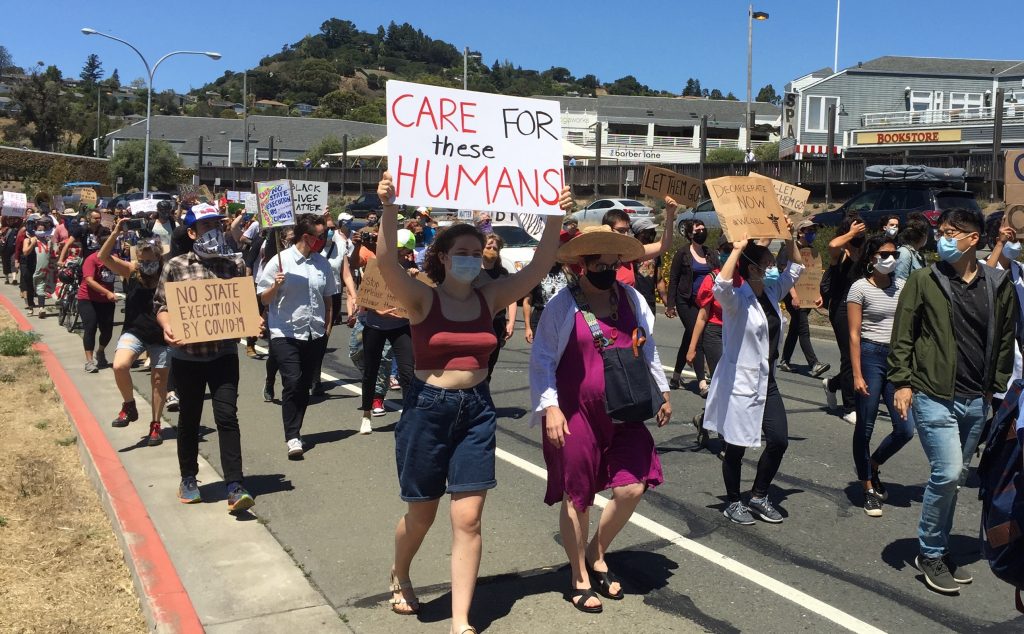 San Quentin, Calif.—On Aug. 2, several hundred people, including many family members of prisoners at San Quentin, demonstrated for the fifth time in the last three months to protest the state’s murder of prisoners by COVID-19. Our cry was, “No state executions by COVID-19!” At the time of the first demonstration in May, there were no COVID-19 cases at San Quentin. We demanded that the California Department of Corrections (and rehabilitation, CDCr) take preventive measures by releasing at-risk prisoners to enable the most minimal social distancing, and by providing masks, cleaning supplies, etc.

Instead, in late May, CDCr brought several dozen prisoners from California Institution for Men—the site of the deadliest outbreak of COVID-19 in California’s prison system at the time—to San Quentin without testing them. San Quentin was warned by Marin County’s top public health officer that, unless these transferred prisoners were “radically sequestered,” a major outbreak would ensue. And so it did.

By Aug. 2 over one half of San Quentin’s population tested positive and 19 died there. On Aug. 17, the First District Court in San Francisco found that prison officials had shown “deliberate indifference” to the health of those in custody. One judge was stunned that neither Gov. Gavin Newsom nor CDCr’s director Ralph Diaz were willing to even discuss a possible release of vulnerable prisoners, even though “the pandemic within San Quentin is probably more severe than in any jail or prison facility in the U.S.”

Fifty-five prisoners have died in CDCr’s custody thus far, with numbers increasing daily. CDCr’s total impunity and inhumanity with respect to prisoners’ lives is a part of the insanity of this moment of the dehumanization of many, especially “minorities.”

← Amid election battles, masses demand no return to normal
Thoughts from the outside: Black August, an evolving Idea →
This work is licensed under a Creative Commons Attribution-ShareAlike 4.0 International License