Detroit Mich.—On Jan, 19 nearly 1,000 women defied a major snowstorm to rally at the Charles H. Wright Museum of African-American History. This “sister march” was sponsored by Women’s March Michigan, a separate organization from the National Women’s March. The main speakers were newly-elected Michigan women politicians, but others, from “Girls Making Change” to Water Warriors to Mothering Justice, broadened the rally to update everyone on local grassroots organizing activities. 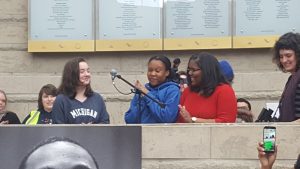 Rashida Tlaib, proudly Muslim and newly elected to the long-held seat of Congressman John Conyers, made it clear that she continues his grassroots militancy. “We look different and we think differently,” she said. “I will continue to speak truth to power. They call me Mother Bear; my anger and passion did not get checked on the steps of Congress. But this is just the beginning. We lean on each other. We are too many. Women fix things! We are going to free the U.S. from oppression again!”

Siwatu Salama Ra (Free Siwatu) a Detroit justice activist, thanked the Black and feminist organizations (like the March for Black Women and her “freedom team”) who helped her gain freedom after a neighborhood altercation resulted in her arrest and incarceration for 248 days. “I gave birth to my son under unspeakable conditions,” she said, asking the crowd to give support to incarcerated pregnant women. “Love wins. We believe in our power,” she declared. 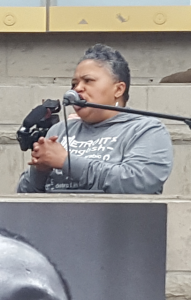 Monica Lewis Patrick, Water Warrior, electrified the crowd by linking the Flint water crisis (into its fifth year); water shut-offs in Detroit, a city which refuses to offer a Water Affordability Plan; property loss due to high rates of foreclosure; Nestle Corporation’s exorbitant profits from bottling and selling Michigan’s groundwater; and widespread water pollution from P-FAS chemicals. “Water is a human right; it’s a human fight for water! We don’t have the luxury of dividing our struggles. We are more than breasts and ovaries. Not only do we live on stolen land; millions have been stolen from the public schools to build playgrounds for the rich. Think! It’s all connected.”

When this march was planned late last year, some wanted it to join the Lansing march to bring greater numbers to the state capital. But those who felt strongly that the march should be accessible to women in the largest Black city in Michigan prevailed. The power and energy at this rally showed that this newest form of the Women’s Liberation Movement will not simply be channeled into electoral politics. Nor will it be stopped because some in the national organization conflate empowering Black women with the work of Louis Farrakhan, an unrepentant woman-hater and peddler of lies which blame all of capitalism’s crimes and alienation on “the Jews.” (See “Anti-Semitism mars women’s march.”)