Contents:
I. Two opposite directions: Climate strike and genocide
II. Remaking the world order in the image of the far right
III. World crises in economy, politics, ideology—and the missing link of philosophy
IV. Humanity’s never-ending quest for liberation
V. What to do in a world in upheaval

I. Two opposite directions: Climate strike and genocide

Two events that happened almost simultaneously on March 15 dramatically reveal the tectonic forces ripping at this disintegrating capitalist society: the international climate strike carried out by youth and the racist massacre at New Zealand mosques.

The first reveals a profound reach for a new human future. The second a reach in the opposite direction for a mythic past—one rooted in the actual past of slavery and oppression, but purged of the freedom struggles.

A. The global youth climate strike

Greta Thunberg and seven other teenage women leaders of the climate strike released a brief manifesto explaining the strike actions that took place in over 120 countries and involved as many as 1.5 million pre-teen and teenage students, as well as older supporters. This is not only a new level of mass activity around climate. It is a new point reached in the thought of the movement.

“The system we have right now is failing us,” they wrote. “We have watched as politicians fumble, playing a political game rather than facing the facts that the solutions we need cannot be found within the current system. They don’t want to face the facts—we need to change the system if we are to try to act on the climate crisis. This movement had to happen, we didn’t have a choice. The vast majority of climate strikers taking action today aren’t allowed to vote….Despite watching the climate crisis unfold, despite knowing the facts, we aren’t allowed to have a say in who makes the decisions about climate change….The kind of changes that need to happen mean everyone recognizing that this is a crisis and committing to radical transformations. We strongly believe that we can fight off the most damaging effects of climate change—but we have to act now.”

Sophie Sleeman, 17, of the UK, counterposed the Youth Strikes, as a “movement unrestricted by walls,” to the far right’s growth. “Going across borders,” she wrote, “young people from around the world are weaving a new social fabric in which climate justice is our connecting force—a sledgehammer to the walls around us.” 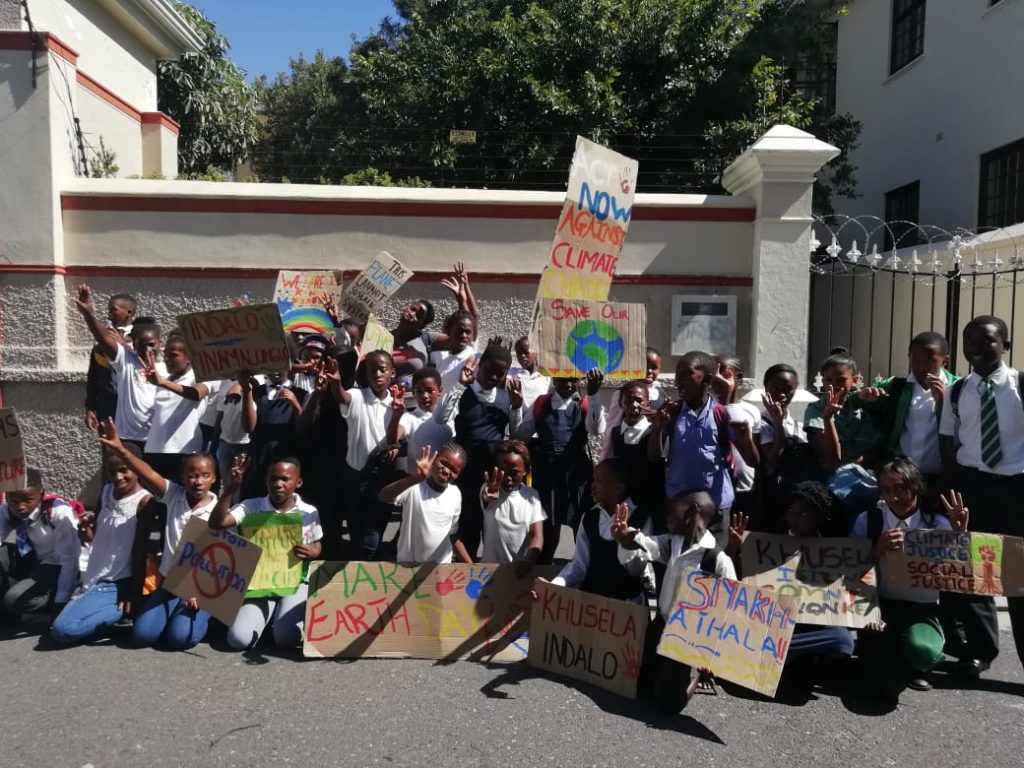 The clarity of the climate actions cuts through politicians’ and corporations’ show of pretending to do something, as the youth have their eyes focused on the already unfolding disasters. As opposed to outright denial of the science and the shell game of fretting over costs to “the economy” to put off real action to protect human beings, the youth are grounded in solid knowledge that puts to shame most politicians. On April 12, several leading climate scientists released a letter of support declaring that the youth’s “concerns are justified and supported by the best available science. The current measures for protecting the climate and biosphere are deeply inadequate.”

The reality pierces the show. Greenhouse gas emissions continue to rise, with only a slight pause after the 2008 crash. Emissions of both carbon dioxide and methane have actually accelerated, despite the pitiful measures under the Kyoto Accord, the Paris Agreement, and individual governments. Some 40% of the increase in carbon dioxide in the atmosphere has occurred since the 1992 Earth Summit, out of which came the first world treaty promising to limit global warming.

Half of emissions are due to resource extraction like mining, oil drilling and deforestation. Resource extraction and energy production keep rising faster than population. Plastic production has increased twenty-fold in the past 50 years and is set to rise 40% more in the next decade as petrochemical companies vastly increase plastic manufacture based on cheap fracked oil and gas.

At the behest of oil companies, the Trump administration sabotaged UN negotiations on reducing plastic use and production in March. New chemicals keep being brought to market despite lack of knowledge of their effects. U.S. recycling systems are collapsing. The capitalist economy keeps moving in the direction opposite to what is needed, despite empty assurances by government and industry. It keeps moving toward more and more production because its inherent spirit and motive force is, as Karl Marx pointed out, “production for production’s sake.”

B. The deadly escalation of white supremacist counter-revolution

If the youth in the climate strikes are reaching for a totally transformed future, the massacre of 50 people in two New Zealand mosques reveals a pull in the exact opposite direction. That shooter’s manifesto makes clear that the logic of that direction is genocide. It is the logic of how the system hits back at forces reaching for the future and tries to chain the present to the past of slavery, conquest, exploitation and domination. This was part of an alarming wave of successful, attempted, or planned mass killings by white supremacists.

Trump tried to hide this genocidal logic, which is inherent in his obsession with white nationalism—about which he desperately lied, “I think it’s a small group of people that have very, very serious problems.” No one could escape remembering his discovery of “very fine people on both sides” at the far right’s deadly 2017 rally in Charlottesville, Va.

Fact-checkers got busy reminding Trump of the 2018 Pittsburgh synagogue massacre, the anti-Muslim killings in Quebec City and London in 2017, the 2011 slaughter of 77 people by a far-right terrorist in Norway as well as the U.S. Coast Guard lieutenant arrested in February for plotting to copy the Norway attack. They could have added the huge spike in hate crimes that individually fall short of mass killings, ever since Trump started campaigning against Mexicans, Muslims and women, which spiked again after he “won” election. Trump-fueled hate crimes have targeted immigrants, Jews, Muslims, African-Americans, Latinx people, women, Gays, Transgender people, people with disabilities, homeless people, anyone viewed as outside the “right” people. The long history of anti-abortion terrorism continues, and is tacitly supported by Trumpism.

To Trump, the true emergency, other than the threats to his personal fortune and prestige, is not the stream of disasters fueled by climate change. Nor is it the war clouds over Iran or building conflict with China, and even North Korea. It is certainly not the never-ending police execution of Black Americans like Willie McCoy in Vallejo, Calif., Stephon Clark in Sacramento, Daniel Hambrick in Nashville, Antwon Rose II in East Pittsburgh and Laquan McDonald in Chicago. Nor is it the precarious wage situation of millions counted as employed under the rosy official statistics. It is not the brutal human rights abuses at the border such as separation of families, nor the presidential power grab to build a wall wanted only by a delusional mob.

What counts as an emergency is asylum-seekers, mostly women and children, who are not white. Using the same language as the terrorist attackers of the New Zealand mosques and the Pittsburgh synagogue, Trump called the caravan “an invasion of our Country.” Trump’s wall-building is a militarization of the mind, aimed more at keeping the U.S. population in line than at keeping others out. That effort involves demonization of people of Latin American descent as the Other.

One measure of the depth of today’s crisis is the fact that, unlike the fabricated emergency, the rekindling of the nuclear arms race does not seem to merit front-page news. It is not only the fact that the new deputy national security adviser, Charles Kupperman, has stated that the U.S. could win a nuclear war. The U.S., soon followed by Russia, withdrew from the Intermediate-Range Nuclear Forces Treaty, one of the last remaining arms control instruments, and both are ramping up the nuclear arms race while talking ominously about “useable” nukes.

Foremost in the Trump administration’s arms race calculations is the rising power of China. Its conflict with China ranges from rolling out new weapons to waging a trade war, from confronting the Chinese Navy in the South China Sea to deploying troops across Africa, which it sees as a commercial and geopolitical battleground.1See our editorial on “Is nuclear war on the horizon?” (March-April N&L), which analyzes how the global economic crisis is forcing a unity of economic and war policy, as well as the reach for something new in opposition. The nuclear arms race extends to India and Pakistan, which conducted air strikes on each other this year.

If the Trump administration has its way, Saudi Arabia will have a chance to build nuclear weapons, confronting both regional rival Iran and nuclear-armed Israel. Outright war against Iran is still on the table: Israeli Prime Minister Benjamin Netanyahu let the cat out of the bag with a tweet, swiftly deleted, announcing a meeting with Arab countries including Saudi Arabia “to advance the common interest of war with Iran.” The meeting he referred to was Trump’s February anti-Iran summit in Warsaw.

If nuclear war does not put an end to civilization, the rulers are pursuing another such path through climate catastrophe. Those who spearhead the turn to fascism can’t abide even the mild restrictions placed on oil, coal and deforestation. From Trump to Brazilian President Jair Bolsonaro, they are opening the floodgates while attacking climate science.

Whether in power like Trump or gunning for it like the Alternative for Germany party, these far-right wreckers pretend to oppose “elites,” but in reality they are doubling down on capitalism and its attacks against working people as well as against women and all kinds of minorities and scapegoats.

Continued in II. Remaking the world order in the image of the far right…

Why we print the Draft Perspectives in News & Letters

In 1975 News and Letters Committees printed its Draft Perspectives Thesis in News & Letters for the first time. The organization has continued the practice ever since. What follows is the 1975 explanation of why we decided to take such action and why we continue to do so:

With this special issue, News and Letters Committees are breaking totally new ground for the Marxist movement. Publishing the Draft Perspectives Thesis for our coming national gathering directly in the pages of our paper is unprecedented, not only for all other organizations, but even for our own. We do it because our age is in such total crisis, facing a choice between absolute terror or absolute freedom, that a revolutionary organization can no longer allow any separation between theory and practice, philosophy and revolution, workers and intellectuals, “inside” and “outside.” We ask you to join in the discussion of these Perspectives with us. We are not presenting any “pat answers” to the question, “Where Do We Go From Here?” We are raising the questions that demand answers—and we ask you to help us in working them out.

Continued in II. Remaking the world order in the image of the far right…

← May-June News & Letters pdf is online
II. Remaking the world order in the image of the far right →
This work is licensed under a Creative Commons Attribution-ShareAlike 4.0 International License