With the Trump administration’s gutting of the Affordable Care Act’s (ACA) birth control mandate while at the same time successfully making the ability of women to have an abortion a “right” fewer and fewer are able to use, we are faced with a blatant attempt to not just control women’s bodies and lives, but to crush a movement. 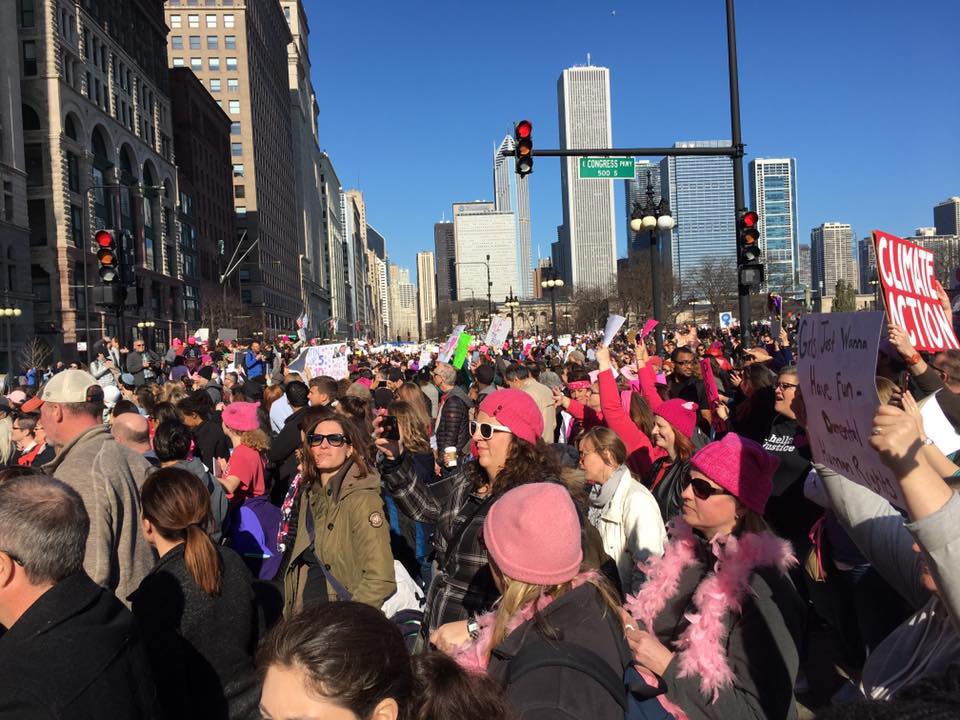 Hundreds of thousands of women participate in the Women’s March in Chicago on Jan. 21, 2017, joining with the national Women’s March on Washington. Photo: News & Letters

Women of all colors are in the center of Trump’s bullseye right next to African Americans in part because of the fantastic worldwide Women’s Marches on Jan. 21; because, as a headline in The Guardian put it: “The Trump resistance can be best described in one adjective: female”; because Trump lost the popular vote to a woman; and because Trump has a realization in that tiny brain of his that women might just be the ones who bring him down.

Trump’s new edict on birth control is an anti-abortion, anti-birth control fanatic’s dream-come-true. Not only are any and all religious organizations entitled to ignore the federal contraceptive mandate—a mandate that made it possible for 55 million women to access the birth control that best suits their needs without charge—now any “entity” can do the same. Besides churches and the like, which already didn’t have to provide birth control, the ruling now includes nonprofit organizations, for-profit corporations, and any other nongovernmental employer, as well as colleges and universities.

Not satisfied with allowing any employer with religious objections to deny paying for women’s contraception—which is, after all, healthcare—with Trump’s new ruling one only needs a “moral objection” to do the same. And unlike what was worked out by the Obama administration—that women whose religious employer refused to provide birth control would get it automatically from other sources—now there is nothing requiring that women be provided birth control from any sources at all.

Linda Greenhouse, a perceptive Supreme Court watcher, points out “the administration’s truly astonishing effort to show that birth control really isn’t all that important and may even be counterproductive. Statements [in the rule like] ‘Contraception’s association with positive health effects might also be partially offset by an association with negative health effects,’ are hogwash… One cited article from the Ave Maria Law Review by Michael J. New, a well-known anti-abortion activist, insists that there is ‘little evidence that increasing the use of contraceptives reduces the unintended pregnancy rate.’”

TORTURING WOMEN FOR THEIR CHOICES

What starkly reveals the fanatical depths Trump’s administration is anxious to sink to is their torture of a 17-year-old immigrant who tried to get an abortion after being locked up for illegally crossing the border. “Jane Doe” got the judicial bypass minors must get in Texas to obtain an abortion as well as raising the necessary funds when she was nine weeks pregnant and her abortion would have taken ten minutes. But the Office of Refugee Resettlement (ORR) refused to let her leave the “facility” (read prison). The Trump administration put Doe through hell until Oct. 25, when she was 16 weeks pregnant and the procedure is more complicated.

Doe said that when she found she was pregnant, “I knew immediately what was best for me then, as I do now—that I’m not ready to be a parent…[The government has] not allowed me to leave to get an abortion. Instead, they made me see a doctor that tried to convince me not to abort and to look at sonograms. People I don’t even know are trying to make me change my mind. I made my decision and that is between me and God.… This is my life, my decision. I want a better future. I want justice.”

The government hypocrisy was sickening: jailing Doe in the ORR facility was supposedly not an “undue burden”; they maintained it was Doe’s “choice” to remain in the ORR when her other “choice” was to be deported to her home country where abortions are illegal and her parents abusive. While making her abortion more dangerous, the government claimed the ORR didn’t want her to have the abortion as they would have to “monitor Jane Doe’s health” and do follow-up care if she suffered “complications,” made more likely by their own actions. But if Doe had the baby, the government “would be happy to provide” that care.

This is hard to believe since this is the same administration that is working to destroy healthcare for all Americans who aren’t filthy rich. Their supporters opine about “anchor babies,” and want to cut immigration to zero. Many of them want to deny citizenship to children born in the U.S. whose parents do not have legal status here.

Trump’s policies hurt those who are most vulnerable—especially Black, brown, and poor people; the old, children, babies, and women. But he cannot crush the movements against him; just make them more determined and more powerful.

← Puerto Ricans suffer as Donald Trump plays to his racist base
Editorial: Save the Rohingya, stop the genocide! →
This work is licensed under a Creative Commons Attribution-ShareAlike 4.0 International License