Donald Trump as a presidential candidate promised to get tough on China almost as often as he slurred Mexican immigrants as rapists. Yet in office his general indifference on foreign policy—except where he has ceded positions to the interests of Vladimir Putin and Russia—has created a power vacuum into which Xi Jinping has eagerly thrust China. 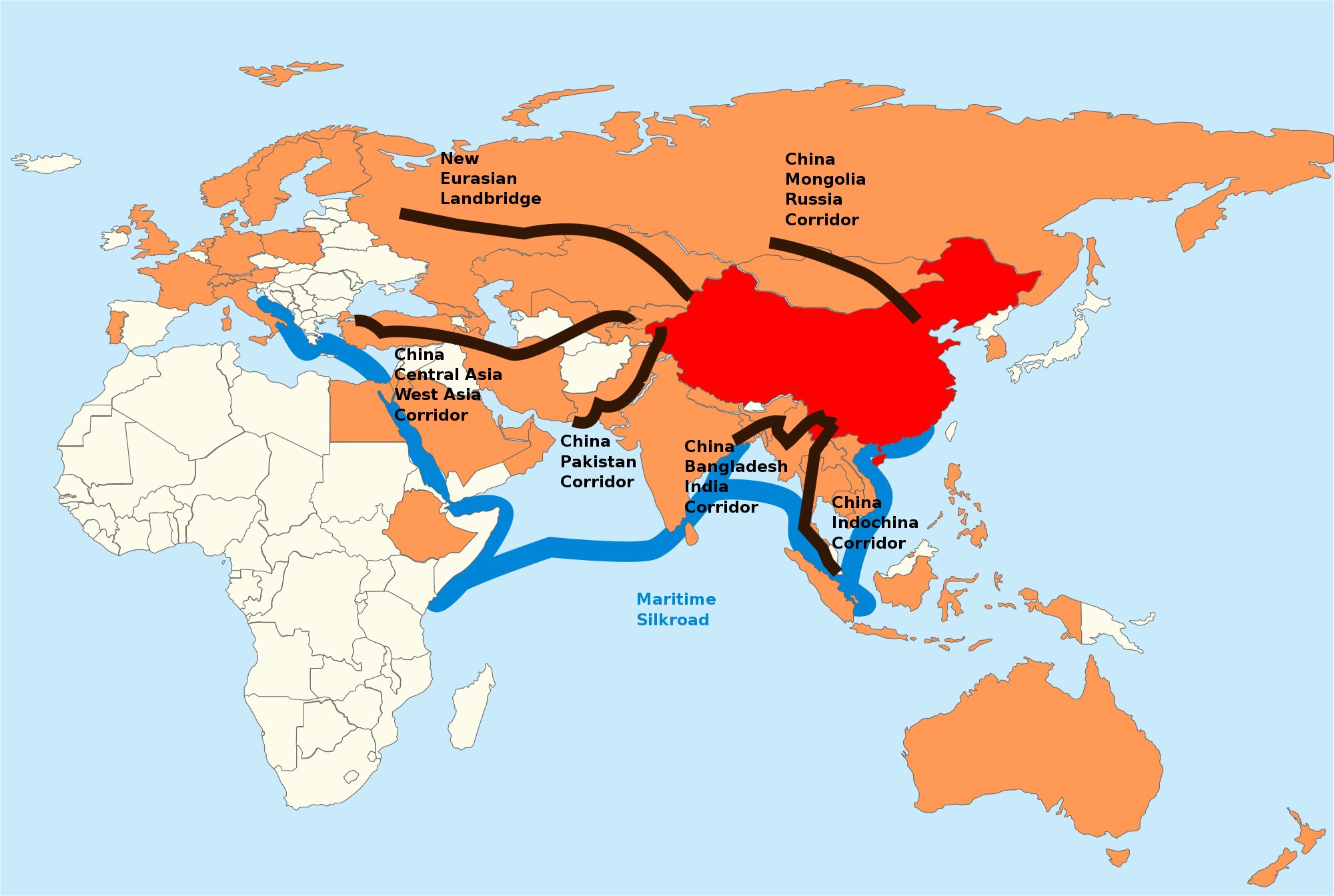 China in Red, the members of the Asian Infrastructure Investment Bank in orange. The 6 proposed corridors ( https://www.merics.org/en/merics-analysis/infographicchina-mapping/china-mapping/ and http://www.cbbc.org/cbbc/media/cbbc_media/One-Belt-One-Road-main-body.pdf ) in black.

Xi has parlayed the anti-corruption campaign within the Communist Party of China and the Belt and Road Initiative (BRI) across Eurasia and East Africa, introduced soon after he gained power in 2012, into consolidating control of the machinery of power within China and projecting influence internationally. The anti-corruption campaign might appeal as a populist response to people’s disgust at conspicuous corruption among Party officials, but it has led to high functionaries in rival factions overcrowding elite prisons, and others fearful of joining them.

The anti-corruption campaign, which Xi says will continue forever, will now be coupled with a new campaign to root out hidden enemies in the Party. Tracking down potential enemies online and in daily life has expanded with the aid of cutting-edge electronic surveillance, first employed against Uyghur resistance in Xinjiang, and with a projected national supervisory commission to centralize it.

The result was that Xi was re-elected Party General Secretary in October 2017 without open opposition, and with no obvious successor. Instead, Xi Jinping Thought, the wisdom of this one-term leader, was added to the Constitution, the first “Thought” there since Mao Zedong’s.

It thus came as no surprise to find that the National People’s Congress is expected to abolish the ten-year two-term limit and permit Xi to rule in perpetuity. He was able to clear away constitutional obstacles to maintaining power more quickly than another petty functionary who rose to the top, Russia’s President Vladimir Putin, who for a while had to rule Russia through straw man Prime Minister Dmitry Medvedev.

CHINA AS THE WORLD’S CREDITOR

Outside of China, Xi is armed with the capital extracted from Chinese workers during 25 years of primitive accumulation of capital, plus the excess industrial capacity that the Great Recession created. From the world’s sweatshop China has become the world’s creditor, wielding the capital to expand BRI, financing highways, railroads, port facilities and airports across Asia and beyond.

While Trump’s “America First” U.S. only offers cents on the dollar to the states for their highway and bridge projects, China is nearly the only source of capital for neighboring nations. They have eagerly signed on, even for projects that China related to old territorial claims of the Chinese Empire or trade routes leading back to it, laying bare Xi’s expectations for what he calls a “community of shared future.”

But China’s largesse is less like the post-war Marshall Plan for rebuilding Europe under U.S. direction and more like the World Bank’s, whose loans trap Third World countries in thrall under mountains of debt and demand race-to-the-bottom gutting of wages and working conditions in exchange.

In the Maldives, an island chain in the Indian Ocean, airport, road and bridge projects built by China are expected to raise the nation’s external debt to more than half its annual Gross Domestic Product in just three years. China has already taken over 16 islands in lieu of the Maldives’ defaulting on debt. A state-owned Chinese company got a 40-year lease on the port of Gwadar in Pakistan for the same reason, and Sri Lanka granted China a 99-year lease on the port of Hambantota, again to avoid debt default.

Only practiced ideologues could tell us how that lease differs from the 99-year lease that the British extorted for mainland Hong Kong from the weakened Chinese Empire. The expiring lease led to the UK returning Hong Kong to China’s control in 1997, but under the One Country Two Systems policy, that left Hong Kong with some degree of autonomy until 2047. In the last year, Xi’s consolidation of power has led to a steeper undermining of that special status. Activists in the 2014 Occupy Central movement, already punished, have faced even harsher jail time. Established opposition political parties have been ruled off the ballot.

THE THREAT OF XI JINPING’S ‘THOUGHT’

Foreign adventures, including island building in the South China Sea to assert China’s claims over its neighbors, are aimed at domestic control. Mao Zedong admitted in the 1956 Constitution that China was state-capitalist. That has remained true in the succeeding 60 years, even as contorted “Marxist” rhetoric has changed.

The official line is that China is “currently in the primary stage of socialism” and would remain there for over a century, promising only a “moderate” raising of living standards. “Xi Jinping Thought on Socialism with Chinese Characteristics for a New Era” in practice is not a promise but a threat to China’s workers, who had reason to strike thousands of times since Xi took command. The other side of keeping workers down at home is acting aggressively on the world stage.

← Voices From the Inside Out: What is the objective of prisoner unity?
From the Writings of Raya Dunayevskaya: Rosa Luxemburg as feminist →
This work is licensed under a Creative Commons Attribution-ShareAlike 4.0 International License