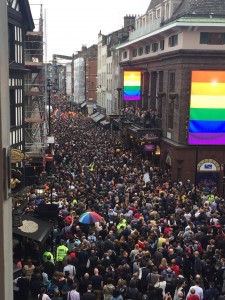 Demonstration in London in solidarity with those murdered and attacked at a gay nightclub in Orlando, Florida. Picture: twitter.com/WayneDavid81

Near 2:00 AM, June 12, after a night of celebrating Latin Gay identity, patrons at the Pulse nightclub in Orlando, Florida, were assaulted by heavily armed domestic terrorist Omar Mateen. For three hours, he shot people, took hostages, and finally died in the apocalypse he had orchestrated.

We stand in solidarity and mourning with the 49 people who were murdered, the 53 wounded, their families and communities. The massacre is a reminder of why the struggle for LGBTQI freedom must continue. The point was underscored later that day when another heavily armed man was taken into custody at the Los Angeles Pride Parade.

From the beginning, the struggles of LGBTQI people have added immeasurably to our understanding of the most basic questions, “What does it mean to be human?” and “What does freedom mean?” As Black Lives Matter reminded us, often through the voices of Black Queers, our revolutionary ground must never be less than human freedom and dignity.

The Orlando killer, Omar Mateen, seems to have been a case study: he was a narcissist, a wife-beater, and a make-believe cop—reminiscent of George Zimmerman, killer of Trayvon Martin.

Mateen was surrounded by toxic social relations. His father, a would-be Afghan politician based in the U.S., embodies the worst aspects of U.S.-Afghan relations. He advocates geopolitical alliance with the Taliban in support of his desire for Afghanistan to annex Pakistan’s Northwest Frontier Province. Small wonder Mateen wanted to gesture towards ISIS and the Boston Marathon bombers before he died.

Despite earlier claiming membership in Al-Qaeda and Hezbollah, ultimately Mateen wasn’t taken seriously as a threat by the FBI. It wasn’t geopolitics that drove him, but internal conflicts, and nothing kept him from being licensed to carry a gun or from being able to buy military assault weapons.

Mateen worked as a G4S guard in Florida’s privatized juvenile prison system. Facilities run by G4S, a multinational security company formerly notorious as Wackenhut, have seen numerous examples of violence and sexual abuse directed at young prisoners by company personnel. There are few schools of dehumanization more efficient than the U.S. prison system.

Even before all facts were known, Donald Trump was treating the massacre as his racist, anti-immigrant, anti-Muslim, anti-women campaign’s Reichstag Fire—the event Hitler used to consolidate his power. Omar Mateen is Trump’s best campaign asset. And it’s certain Mateen was influenced by the atmosphere spread by Trump’s, and the Right’s, hateful rhetoric.

This hatred has only become more virulent in the face of recent victories for LGBTQI people like the Supreme Court striking down bans on same-sex marriage.

The reactionary rise of anti-LGBTQI hatred can become a “license to kill” for the most inveterate haters. Witness “bathroom bills” directed against Transgender people, as in North Carolina; the bombing of a Target store’s bathroom in Evanston, Ill., over that issue; a Gay couple in Atlanta assaulted with boiling water; a young Gay man in Los Angeles murdered by his homophobic father.

The Orlando massacre will resonate in domestic politics and across the world. The ghoulish spectacle of Trump crowing that he “appreciated the congrats for being right on radical Islamic terrorism” disgusted many, but also galvanized his base. Even part of the ruling class now realize that this sociopath and neo-fascist can’t be given political power.

This crime will also be used to bolster Europe’s rising anti-immigrant Right. It will be a primary task of revolutionaries to defeat these reactionary moves.

This will require developing, practically and philosophically, the uncompromising assertion of human freedom and dignity common to Black Lives Matter, the Arab Spring, and the Syrian Revolution, which has long struggled against ISIS and its related ideologies. It will mean a fierce defense of, and solidarity with, the LGBTQI community, which is the common target of reactionary attacks across the world.

The creation of a new human society remains the human endeavor. The totality of the crisis demands a total solution. It can be nothing short of a New Humanism.

← Making of a disabilities rights activist
Polarization in Brazil →
This work is licensed under a Creative Commons Attribution-ShareAlike 4.0 International License