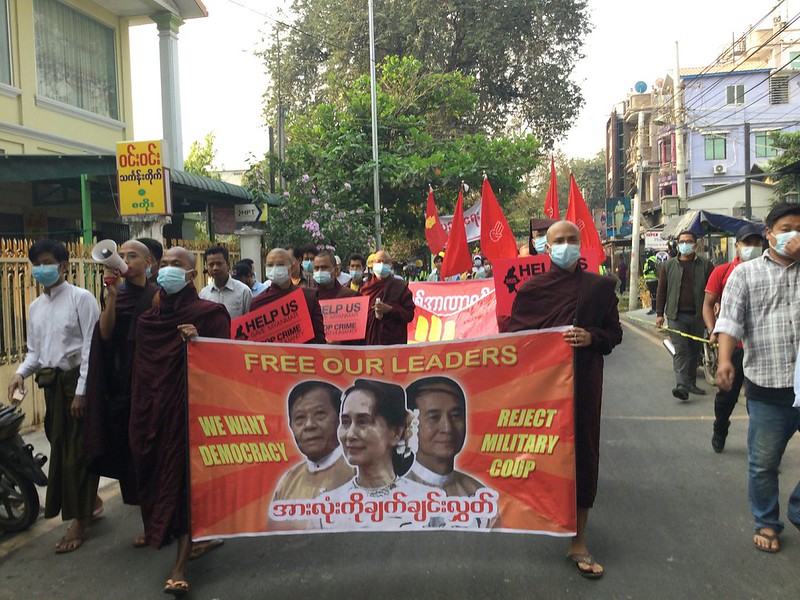 The people of Burma have taken to the streets in cities and villages daily by the tens of thousands since the army, under Senior General Min Aung Hlaing, carried out a coup on Feb. 1. The coup came less than three months after the overwhelming re- election victory of the National League for Democracy (NLD), which won with 80% of the ballots. The military used Trump-like math and cried election fraud despite their own control of the process.

They not only detained Daw Aung San Suu Kyi and other leaders of the NLD, but private citizens on their list. The first demonstrations were a sea of pictures of San Suu Kyi. One Rohingya noted just a solitary sign that regretted the genocide against Rohingya Muslims. But as the demonstrations brought out many new layers of the population, activists began rethinking the limits of supporting NLD and their history of not standing up to the Rohingya genocide. 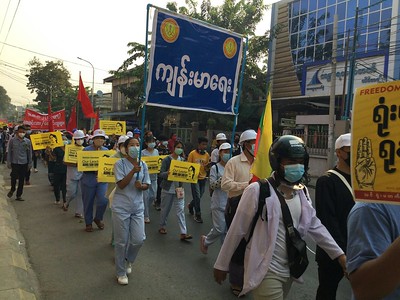 Demonstrations grew to hundreds of thousands, mostly young women from the ranks of teachers, garment workers and medical workers. They defy the state terror of the army and police forces, who killed at least 18 protesters on Feb. 28 alone. On March 3, 38 were killed.

WOMEN, LGBTQ+ ON THE FRONT LINES

An 18-year-old protest leader, Ma Kyal Sin, was shot in the head while passing out water to allay tear gas. More than 1,500 have been arrested. (See “Taking on Myanmar Generals, Women Emerge as ‘True Warriors,’” The New York Times, 3/5/2021.) LGBTQ+ participants made themselves visible by carrying rainbow flags as they faced likely erosion of rights under direct military rule. A general strike called by labor unions on March 8 shut down much of the country. The military responded with more terror, invading hospitals and universities and muzzling the press. 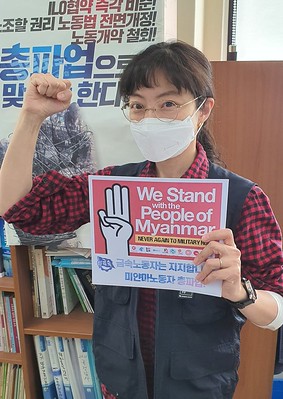 This deeper, more human level of opposition is not just to the coup, but the nationalist monks as well as NLD’s positions. A 28-year-old doctor, Yin Yin Hnoung, said, “Young women are now leading the protests because…we care about our future generations.” Young women leaders who protest by day, but have to hide by night—such as Ei Thinzar Maung and Ester Ze Naw, who herself comes from the Kachin minority—have consistently spoken up for the rights of minorities and against ethnic cleansing of the Rohingya.

CHINA AND RUSSIA BACK UP HLAING’S COUP 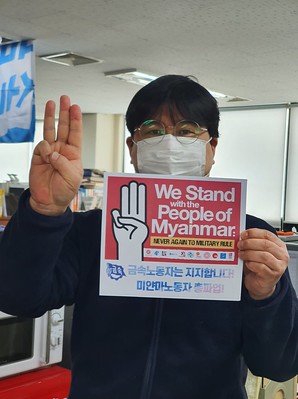 General Hlaing has counted on the veto power of China and Russia at the UN to obstruct international condemnation of the coup. China, a prime investor in Burma’s oil, gas and mineral riches before expanding control of pipelines and harbor projects under its Belt and Road Initiative, has intervened in the actual post-coup repression.

While most flights within Burma are grounded, multiple daily flights from Kunming in China are replenishing stores of ammunition and other equipment. This is the same playbook as in Belarus, where dictatorial president Alexander Lukashenko has made clear his intention to meet massive demonstrations against his sham re-election with brute force while the threat of direct Russian military intervention looms.

San Suu Kyi, as the visible face of the brutally suppressed 1988 uprising, had survived two decades of house arrest until her release in 2010. She had guided the NLD in forming a government in 2015 under the peculiar and precarious system in which the army claimed great swaths of independence and permitted civilian rule only under the thumb of the military. Her complete lack of criticism of the military campaign of genocide against Rohingya Muslims in Rakhine State in 2017 was first taken
as proof of how limited her authority really was.

But her full-throated defense of the army and its mass slaughter of Rohingya Muslims and torching of their villages, forcing three-quarters of a million Rohingya to flee their homes for shelter in Bangladesh, Malaysia and elsewhere, eroded her international standing as a defender of human rights and democracy.

The NLD victory in the November 2020 elections was even greater than in 2015. But it did not protect her from the army arresting her and fellow officials and asserting total power once more.

Even though no regrets or apology were heard from San Suu Kyi or the rest of the NLD on their collusion with genocide, the movement to stop the military coup has gone beyond mere support for the deposed government.

A new social solidarity is emerging. Rohingya living in Yangon participated in marches there. And those in refugee camps shared expressions of solidarity with other Burmese defying the army, despite the lack of solidarity from them when Rohingya were being expelled from their homes.

We express solidarity with the new, deepening movement of women, youth, workers, LGBTQ+ people, and ethnic minorities including Karen, Chin and Rohingya. The struggle continues.

← Coming soon: ‘What Is Socialism? A Marxist-Humanist Symposium’
Women from India to the USA fight against misogynist violence →
This work is licensed under a Creative Commons Attribution-ShareAlike 4.0 International License