When Russia, Turkey and Iran agreed to create a “de-escalation zone” in Syria’s Idlib province last September, it was clear they were creating a concentration camp. Three million Free Syrians, including many from other parts of Syria, were targeted. This was a blueprint for genocide.

With the escalation of air attacks on civilians by the Bashar al-Assad regime and its Russian ally, the machinery of genocide was put in motion. Now hundreds have died, including women and children. Hundreds of thousands have been displaced, many driven to open fields or the bare shelter of olive groves.

Eman Afore, whose husband was killed, described her situation: “There is no way out of this hellfire. There have been attacks day and night. The jets and helicopters flying above made me and my children sleepless.”

Free Syrian revolutionaries are being pushed to the limit. But humanity is being put to the test.

The bombing of hospitals, schools, markets and neighborhoods aims at denying the necessities of life. In the words of Fadel Abdul Ghany of the Syrian Network for Human Rights, “This continuous targeting is no longer even simply an attack on the Syrian people and society, but an assault on all the most basic tenets of humanity, which will encourage other criminals and tyrants to replicate this unspeakable savagery.” 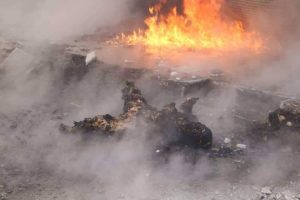 Feb. 17, 2019, a correspondent in Khan Sheikhoun, Idlib, Syria, writes: “The burnt body of Zahra Khaled Aldabos in *Khan Sheikhoun*. No worries this time- It’s not a chemical attack! Meanwhile, Bashar is asking refugees to come back! The last time he had a live talk was a year and a half ago.”

This is an accurate philosophic summation. The greatest horror of the attacks on healthcare facilities, for example, is that they have been conducted through the mechanism of the UN. Many destroyed hospitals had given their coordinates to the UN with the promise that they would not be attacked—yet this information was used by Russia, a UN Security Council member, to target them! Emergency rooms, dialysis centers, maternity hospitals—every attack a violation of the Geneva Conventions and a war crime. First responders have been targeted, too, including White Helmets and Violet Organization ambulance crews.

Farmers’ fields have been burned. Journalist Emma Beals said, “With farming, civilians in opposition areas have a degree of self-sufficiency, but if the crops are destroyed and food supplies are low then they can’t feed their children and the population only has the option of whether to flee or capitulate.” And there is nowhere left to flee to.

ATTEMPTS TO SILENCE THE REVOLUTION

These attacks on civilians are the essence of state terror. Market bombings during the month of Ramadan were timed to coincide with the hours people were shopping for iftar meals, and mosques were bombed at the hours of prayer.

Equally terroristic are attacks on centers of the Syrian Revolution like Kafranbel, Ma’arat al-Nu’man, and Saraqeb. These towns have opposed the Assad regime, ISIS and Al Qaeda. They have explicitly called for universal human solidarity.

The regime and its allies mean to destroy the spirit expressed by journalist Haneen El Sayed in March, on the 8th anniversary of the revolution: “The bombs and airstrikes won’t stop us from demanding our righteous freedom. That moment I was able to express my opinions and my freedom of speech against oppression was indescribable. I’m grateful to the revolution for that feeling, for changing my life forever, and for teaching me to stand by my principles in peaceful resistance.” 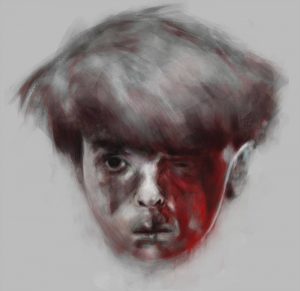 “Silence,” by Salem Bahrom, a Libyan, is a digital depiction of Omran Daqneesh, the 5-year-old Syrian boy whose picture of him in shock, sitting in the back of an ambulance after an airstrike in Aleppo went viral.
Read more: http://www.al-monitor.com/pulse/originals/2017/04/libya-tripoli-art-exhibition-warning.html#ixzz4hGlVLbZ0

In Free Syria, the freedom and dignity of the human spirit has raised itself above the power of physical violence, political hypocrisy, and cowardly silence. The continuing existence of the Syrian Revolution, judges the historic claims of every philosophy, faith and institution, and especially those of the Left which claims these values as its own. It demands our revolutionary solidarity.

AN ABSOLUTE SPLIT WITHIN THE LEFT

When the revolution began, fascist regime supporters raised their slogan: “Assad or we burn the country.” What too many failed to recognize was that this sentence amounted to more than its obvious nihilism. It summarized the logic of capital—from “primitive” accumulation to absolute general law of accumulation and back again. For too many would-be revolutionaries, this failure of theory split philosophy from reality, and created an absolute diremption within the Left.

There is another Left struggling to be born out of solidarity with Free Syria. It has announced itself as a world-historic possibility in the brilliance of the Sudanese Revolution that overthrew Assad ally Omar al-Bashir, and the Algerian overthrow of Assad apologist Abdelaziz Bouteflika.

By directing the full measure of its brutality and cynicism at the revolutionaries of Idlib, the old world is desperately attempting to crush this new vision of possibility. The old is only proving once again that it lacks any historic right to exist. In solidarity with Free Syria, the new finds its footing along these opening paths to freedom.

← Trumpism aims to bleach the census
All power to the Sudanese revolutionaries! →
This work is licensed under a Creative Commons Attribution-ShareAlike 4.0 International License