“Sometimes I think this whole world is one big prison yard. Some of us are prisoners. The rest of us are guards.” —Bob Dylan

In Syria, attacks are intensifying upon the three million Syrians, mostly civilians, trapped in Idlib province. As Ibrahim al-Hamawi of Latamneh said, “The bombing hasn’t stopped—it’s ferocious. I don’t know where my family and I can go now.” Turkey has closed its borders and fired on civilians trying to escape.

These Free Syrians are threatened by Iranian, Russian, and Bashar al-Assad regime troops. They are being bombed by Russian warplanes. It is naked state terrorism. We call upon all of humanity to oppose this and to demand protection for these millions whose only “crime” was to fight for freedom against a fascist regime. 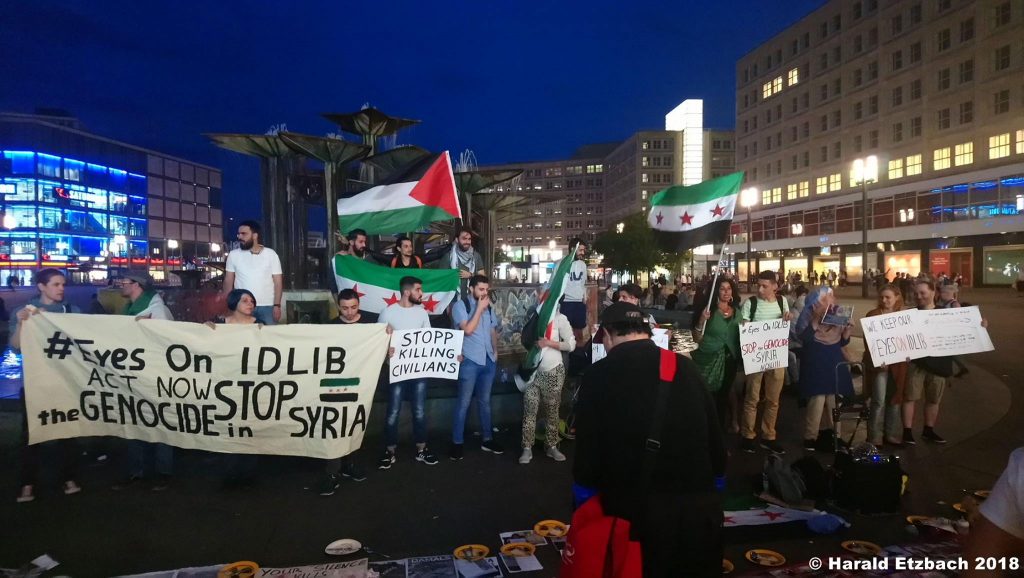 Over one million of these Free Syrians are people who have been displaced from formerly liberated areas like Aleppo, Darayya, East Ghouta, and Daraa. They were displaced by genocidal war crimes—poison gas and incendiary bombs used against civilians, bunker busters used to murder families in shelters, relentless bombings of hospitals and schools. The Astana negotiations held by Russia, Turkey and Iran, and their “de-escalation” zones, were meant to allow the liberated areas to be crushed, one by one.

The essence of a degenerate world is appearing. In Idlib, today, we see the invention of the 21st-century concentration camp, as evil and as telling as those of the colonialists, the Nazis, and the Communists in the last century. It exists at the behest of Assad’s fascist regime, and is presided over and implemented by world and regional imperialism. Despite their rivalries, these powers are united in their hatred of human freedom.

THE ABETTORS OF MASS MURDER

Locals welcomed these displaced freedom fighters to Idlib. In towns like Kafranbel, Maarat al-Numan, and Saraqeb, revolutionaries have consistently called for international solidarity with Free Syria, even as they expressed their own solidarity with Palestine, Black Lives Matter, and the victims of ISIS terror attacks everywhere. They have risked everything to oppose Assad and ISIS and other offshoots of Al Qaeda. They represent the best of humanity.

For this they have been betrayed even by those state powers that professed to support them. Both the Obama and Trump administrations stand guilty of the basest hypocrisy in denying Free Syrians the means to defend themselves. At every decisive moment they have withdrawn what meager support they offered.

This applies to U.S. politicians of both Right and “Left,” as well, from Virginia right-wing state senator Richard H. Black, who supports mass murder in “defense” of Christianity, to Bernie Sanders’ ally Tulsi Gabbard, Representative from Hawaii, who preferred a friendly meeting with Bashar al-Assad to participating in the Women’s March.

THE DISGRACE OF THE ‘LEFT’

All these betrayals were predictable. In the end, there is an absolute contradiction between imperialism and revolution. What wasn’t predictable was the utter failure of the “revolutionary” Left to manifest human solidarity with the Syrian Revolution. (See “The Left’s response to Syrian genocide,” p. 5.)

This failed Left has done as much as anyone to help invent the 21st-century concentration camp. It is in large part a direct result of their absolute failure in both theory and practice. Certainly those groups like the UK Stop the War Coalition and the U.S. United National AntiWar Coalition stand condemned as abettors of fascism and genocide.

But it is not only them. Those anti-Stalinist Leftists who remained silent or sidelined for years while Assad and Putin bombed and tortured, who held back from organizing solidarity with Free Syria, and who now offer only rhetorical support, stand self-condemned. Had they taken Marx seriously, they would understand that in Idlib today they are seeing their own human self-alienation played out to its logical end—genocide.

These Leftists failed to grasp their own time as theoretical, and so failed to manifest practical solidarity with a true revolutionary movement. Thus they become an object of theory. And this theory begins with the insight shared by so many Syrians today: “We thought we were fighting Assad, and then we realized we were fighting the whole world.”