“The current amazement that the things we are experiencing are ‘still’ possible in the twentieth century is not philosophical. This amazement is not the beginning of knowledge—unless it is the knowledge that the view of history which gives rise to it is untenable.”
—Walter Benjamin, On the Concept of History

“Even if the Syrian Revolution fails, what will keep it forever a source of courage, hope and faith for mankind is the body of thought, the legacy of consciousness, awareness and sensibility that it has engendered and will generate.”
—Alisar Iram

I. HUMANITY AT THE CROSSROAD

We are living through times as consequential as any in history. The Tunisian revolution and the Georgia prison strike that appeared simultaneously in December 2010 opened a new period in which the lowest and deepest layers of the oppressed have shaken the world.

The minds of men and women, young and old, were on fire with a vision of freedom and human dignity that humbled philosophy, and brought it to new life.

The identification U.S. workers occupying Madison, Wisc., in 2011 expressed with Egyptians in the Tahrir Square occupation signaled both a new international consciousness among proletarians and an organizational form that expressed it. It cut through decades of racism and religious bigotry.

This terrified the ruling classes. They have indulged every brutality, every hypocrisy, fed every contradiction and salted every wound in their efforts to crush this vision. The capitalist rulers, and all the reactionary parasites that cling to them, drew their line in Syria. The Syrian Revolution has been the physical and intellectual battlefield that defines our time.

In “The Left’s Response to Syrian Genocide” (Sept.-Oct. 2018 N&L), David dissects the failure of the U.S. Left to show solidarity with the Syrian people. It is a devastating case; I agree with his critique.

The Left’s solidarity would have been warmly welcomed and deeply appreciated by Syrians, both in the diaspora and in Syria, had it been extended. I spoke at many demonstrations, and no Syrian ever asked me to water down my critique of U.S. imperialism. There were differences on this question, of course, but history was being written and there was no “line.”

There was an international consciousness. When I said the Syrian Revolution was also “the struggle of the people of Palestine, of Iran, of the workers of China, of Russians who protest Putin,” it was applauded.

On the other hand, I never was able to speak about the Syrian Revolution at Occupy Chicago events in 2011-2012 without being attacked by Leftists, often in a dishonest manner that stank of fascist apologetics.

The many initiatives of the Anti-War Committees in Solidarity with the Struggles for Self-Determination have shown that, despite everything, genuine Left solidarity is still possible, necessary, and welcomed.

THE RULERS OPT FOR FASCISM

As early as 2012 it was clear that what happened in Syria would determine the next stage of world history. Now we are there.

Karl Marx wrote that capital comes into the world dripping with blood and filth. This is also true of every new stage of state-capitalist retrogression, as is being signaled by the “rehabilitation” of Syria’s genocidal dictator Bashar al-Assad by “democratic” rulers and theocratic dictators alike. It is the essence of a degenerate world appearing.

It is happening while half of Syria’s population are refugees, millions of them in desperate winter circumstances, in impoverished camps that have suffered floods and freezing temperatures. Children are dying of cold and hunger. It is happening while Assad’s fascist regime massacres its political prisoners, and assassinates even those who have officially surrendered their arms and freedom.

Even in the face of this horror, Syrians continue to uphold the Revolution and its ideals. We must demand relief and protection for these people. They aren’t “victims,” they are persecuted revolutionaries; our comrades, brothers and sisters.

The rulers’ only interest in Syria and its people is in terms of their own imperialist aims: military and geopolitical position or money to be made from the “rebuilding” that Assad’s massacres and property confiscations have made possible—the classic description of “primitive” accumulation as found in Marx’s Capital. This infinite wrong exposes the ruling class in their essence.

Ruling class mythology now holds that the Arab Spring was all about fundamentalist religion, and the threat of terrorism—a tale rooted in the lies that were used to justify the genocide in Bosnia in the 1990s. Russia, China, the U.S., India, Egypt, Israel and the Gulf States are all playing this card, as are the rising reactionary forces in Europe.

Like the defense of multi-ethnic Bosnia in the 1990s, the Syrian Revolution was consciously directed against this kind of bigotry, as represented by the slogan “The Syrian people are one!” 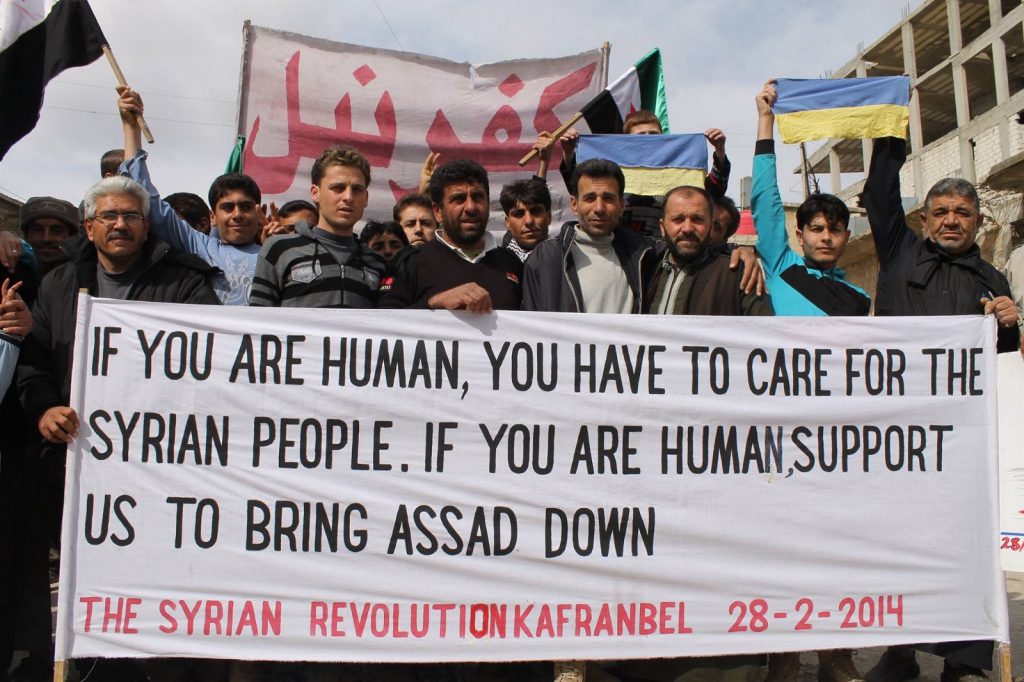 “Who have held the lamp up to truth, and revolutionized all old ideas? The people.”

Why have “Marxists,” and the Left in general, failed so miserably to come to grips with this period? How can a Left journal like Historical Materialism host a major conference, with hundreds of speakers, at which the Syrian Revolution is barely mentioned? (And this is hardly an anomaly.) What is the failure of principle?

The masses have consistently expressed themselves in terms of humanism, the philosophic absolute from which all in Marxism develops.

It has been so in the Syrian Revolution: “What we need now is coordinated solidarity with citizens of different nations with no boundaries, whether religious, ethnic or cultural. It’s vital that we smash those boundaries. The public opinion is human society.”1Rami Jarrah, quoted in “The Syrian Revolution and Its Philosophy,” Nov.-Dec. 2014 N&L.

It was so during the 2011 Pelican Bay Prison hunger strike: “Prisoners reach for the level of social conditions behind prison walls that give us the ability to express our humanity in opposition to the oppressive prison conditions. It is no different from the efforts in various countries today trying to lift the curse of capitalist social relations.”2Faruq, quoted in Pelican Bay Hunger Strikers: ‘We Want to Be Validated as Human’ (News and Letters Committees, 2012), p. 6.

Hegel saw slavery in general as an infinite wrong that justified rebellion, so much so that Frantz Fanon was able to utilize his master/slave dialectic; yet Hegel was more ambivalent on the concrete issue of slavery in the U.S. Marx, to the contrary, was led to support the Abolitionist Movement and slave rebellions and to develop his greatest projection of absolute humanism, Capital, in strict relation to that movement.

As Raya Dunayevskaya emphasized, Marx reorganized this work under the influence of the U.S. Civil War and abolition of slavery. “His analysis of the struggle for the shortening of the working day comes to a climax…when he writes of the relationship of the end of slavery to the struggle for the eight hour day: ‘In the United States…every independent movement of the workers was paralyzed so long as slavery disfigured a part of the Republic. Labor cannot emancipate itself in the white skin where in the black it is branded.’”3Marxism and Freedom, from 1776 until Today, by Raya Dunayevskaya (Humanity Books, 2000), p. 84.

Marx united theory and practice in this projection of philosophy. It included his open support of the North in the Civil War. How many Leftists, how many “revolutionaries,” have fundamentally revised their thinking on the basis of today’s developments? In failing this, too many have fatally split theory and practice. In Syria they have enabled genocide.

Marx’s Capital isn’t an intellectual cage within which one observes the human being. Rather, it is a philosophic projection of absolute humanism which is brought to life through the thought and action of the living subject, the human being struggling against alienation, specifically commodity fetishism, and for freedom. It is a philosophy of history for this particular capitalist moment of self-alienation.

Too often Marx is read as if what he termed the solution to the riddle of history was simply another riddle, rather than, as Hegel said, the human being—“free, self-knowing Spirit.” The freely associated labor that will overcome the commodity fetish is equally a projection of humanism.

Marx followed this logic into a study of non-capitalist societies and the role of women in history in his Ethnological Notebooks of the 1880s. These represent his reading of nineteenth century studies of historic and non-western cultures. Here he continued his anti-racist humanism, as described by the transcriber of these notebooks, Lawrence Krader: “A recurrent theme is Marx’s systematic and uncompromising rejection of race, racism and biologism generally as a determinant…”4The Ethnological Notebooks of Karl Marx, transcribed and edited and with an introduction by Lawrence Krader (Van Gorcum, 1972), p. 37.

By showing the continuity of Marx’s work from the 1840s to the 1880s, Krader makes clear that Marx was concretizing his initial philosophic humanism in these studies of the “other.” Raya Dunayevskaya described this as “a never-ending confrontation with what Marx called ‘history and its process’…And that ever-changing concrete was inexorably bound to the universal, because, precisely because, the determining concrete was the ever-developing Subject—self-developing men and women.”5Rosa Luxemburg, Women’s Liberation, and Marx’s Philosophy of Revolution, by Raya Dunayevskaya (University of Illinois Press, 1991), p. 180.

From first to last, for Marx, what united theory and practice was humanism; and for Marx, humanism was another word for philosophy. 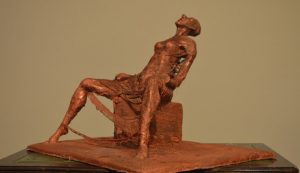 An entire racist mythology has been built around the projection of the Syrian majority population as a savage “other,” including old racist images of the “cannibal” and “head-chopper.” These racist tropes have been promoted by a fascist, genocidal regime, echoed by Rightists and even many “Leftists.”

So Russia’s Vladimir Putin allies with Chechen dictator Ramzan Kadyrov and the reactionary rulers of the Gulf States to “oppose religious extremism,” a move which China is emulating in its concentration camps for Uighurs. This disregards the fact that the Arab Spring marginalized al-Qaeda and other such groups. It attempts to excuse the history of Russian genocidal conquest of Ichkeria.

Nor is this retrogression confined to the Muslim world. Brazil’s Far Right Jair Bolsonaro government has floated an alliance between the U.S., Russia and Brazil as “Christian” countries. (See “Brazil under Bolsonaro’s heel,” p. 1.) The pro-Putin, pro-Assad, anti-immigrant Far Right threatens to seize power in the European Union.

These racist stereotypes have become the basis of a new stage of retrogressive, state-capitalist consolidation. A key moment in this was Trump’s summit with North Korean dictator and Assad ally Kim Jong-un. It signaled that the biggest imperialist power believed the capitalist order could be stabilized on this vile, counter-revolutionary basis.

THE LIFE OF THE IDEA OF FREEDOM

This isn’t a counsel of despair. It is a recognition that the oppressed masses rose up and, in fighting for freedom and human dignity, shook the pillars of the earth. It is a recognition of the dire consequences of the failure of Leftists, of “revolutionaries,” to rise to the level of uniting theory and practice—to embody the humanism that can both critique the present and project a different future.

The prison abolitionism and Black Lives Matter movements made clear that this humanism illuminates U.S. historical development in line with Marx’s Capital singling out enslavement and genocide as “the chief moments of primitive accumulation.”

This should intensify our efforts at solidarity with the millions of Syrians in Idlib and elsewhere who are facing the wrath of a ruling order that hates them as human beings and as the embodiments of the idea of freedom. We must respond to their voices.

From the perspective of the human community, nothing will be clearer than the fact that the Syrian Revolution lives, that freedom remains the essence of human beings, and that the Revolution’s living legacy will be thrown into the face of these currently “victorious” rulers until its absolute truth is written in the dust of their shame.

← Handicap This!: January-February 2019
World in View: Sudan rises against genocidal Bashir →
This work is licensed under a Creative Commons Attribution-ShareAlike 4.0 International License