Chicago—“Families Belong Together!” was the rallying cry for 60,000 people who protested in Chicago June 30. We knew it was going to be big when most of the passengers on the el train were headed for the rally, and one of them said she had seen the previous train jampacked with protesters. The train operator, an African-American woman, surprised us by announcing not the next stop, but her feelings about the demonstrators. She said, “You are demonstrating even though the humidity makes the temperature feel over 100 degrees!” She expressed her dismay over Trump’s politics and thanked us profusely for protesting. Those in our car exploded with spontaneous applause, which we wished she could have heard.

We were far from alone. Events were also held in over 700 other cities and towns across the U.S. and some in other countries. Despite sweltering heat, huge crowds gathered in Washington, D.C., New York City, Los Angeles and other cities, including big turnouts in border cities from Texas to California. 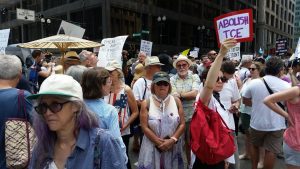 Many families came out in Chicago, of all different ages and races, most with handmade signs. Speakers included children of immigrants and mothers of detained children. It was clear that protesters were united in passionately opposing the separation of families at the border and the caging of children, and in the sense that the country is going in a horrific direction.

As Rachel, a 20-year-old college student, told News & Letters: “I came today because this has been happening too much in our country. I don’t agree with the idea of separating children from their families. If I were one of those children I would have been terrified. Those children are no different than me; it doesn’t matter where they came from or what they look like, they are the same as any other child and should not be separated from their families. What Trump is doing is cruel and racist and I’m totally against this.”

Rachel’s friend, Lydia, said that she was at the demonstration because: “My boyfriend came here illegally when he was two years old, and if he had come now he might be sitting in a cage, which is frightening to him and to me. He is in total shock. I’m here for him and his family, some who came here illegally, and everyone else because this is just wrong! Every day my friend lives in fear that he is going to be taken away and that shouldn’t be the case. I’m worried for all these people.” 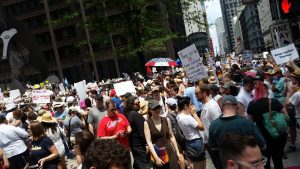 A young Black man, Taylor, told us: “I came here to contribute to the protest against family separations and this really draconian policy against immigrants. I’m in opposition to the current system of capitalism and the way our government is set up, especially the current administration. Any protest against Trump is worth checking out. I talk to a lot of friends outside this country and they’re more aware of what the government is doing and not so much aware of the opposition. They think the opposition is only by radicals, but it also happens by people towards the center, it is happening by all sorts of people. There are people fighting against this system that really care; we don’t all just support everything our government does.”

After the rally at Daley Plaza, the crowd marched to the Immigration and Customs Enforcement office, where several set up tents, as has been done in Portland, Ore., and some other cities.

One thought on “‘Families Belong Together’–Chicago”