Chicago in solidarity with Charlottesville 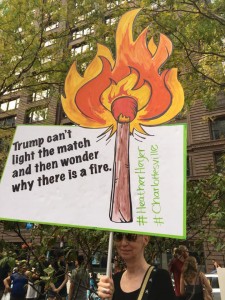 Chicago—There were at least 1,000 people at the demonstration in Chicago on Aug. 13 in opposition to the racist attacks in Charlottesville. It was half vigil for the many injured and for Heather Heyer, the woman who was run down and killed, and half protest. I’m glad we went. Some of the speakers were political, others spoke more about their feelings and the death of Ms. Heyer.

One said that there aren’t these kinds of vigils when Black people are murdered, and questioned others for being shocked and surprised when people of color have known the ugly truth of America for centuries. Another speaker said hate is a normal human emotion in response to white supremacy, that we’re against white supremacy, not hate.

I was upset that a homeless man was silenced and shushed. Flowers were handed out and there were several moments of silence. They could have had an open mic or marched to Trump Tower, but the demonstration seemed tightly controlled. It was the briefest rally I’ve ever been to, less than an hour. There was a lot of sadness, but people did clap when speakers were more political.

Memphis, Tenn.—On the morning of Aug. 20, the last person arrested by the police the day before at an action supporting the removal of Confederate

statues from the city was released from his night in jail.

The rally was festive but the mood was soured by police aggression. Police roughed up several people at the rally who attempted to cover the statue with a white sheet. At least seven people were arrested for charges such as disorderly conduct, obstructing a roadway and desecration of a venerated object.

The police presence was more hostile than typical for this type of gathering. Several people were dragged off, and a police officer bumped demonstrators with her car and made threatening maneuvers at people. Following the arrests, a large crowd marched to the county jail and remained outside until all seven of their fellow protesters were released. 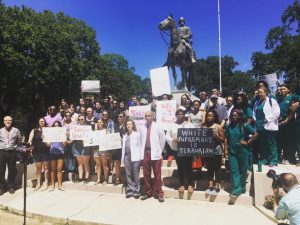 We weren’t the only ones protesting. Over 100 Univ. of Tennessee Health Sciences students, which included Medical, Dental, Pharmaceutical and Nursing students, also walked out of classes as part of #takeemdown901.

They demanded immediate removal of Confederate statues and are especially anxious to get rid of the one of Nathan Bedford Forrest as it is in the park next to the Health Sciences campus. 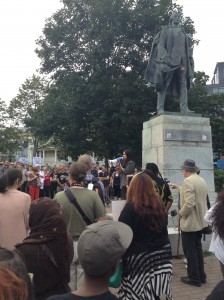 Portland, Ore.—There’s a white people problem here. One year before white nationalists descended on Charlottesville, Va., Larnell Bruce Jr. was a Black teen charging his cell phone at a 7-Eleven in Portland when he was murdered by Colleen Hunt and her boyfriend Russell Courtier, a white nationalist with ties to the known hate group European Kindred. 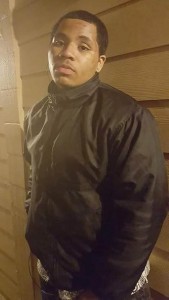 Many in the overwhelmingly white community of Portland barely knew of the murder due to the lack of proper reporting from the mainstream press. But in Portland and Oregon as a whole, racist white nationalist activity isn’t an anomaly. Founded in 1859 as a whites-only state, Oregon at one time had the highest number of KKK members per capita in the U.S. While the number has dwindled, violent, virulent racism remains.

As the one-year anniversary of Larnell Bruce’s murder coincided with the white nationalist rally in Charlottesville, community members gathered in Alberta Park in Northeast Portland for a rally and press conference in his memory and in solidarity with those fighting racists in Charlottesville.

But the organizers’ message wasn’t simply a condemnation of the white nationalists throughout Portland, Charlottesville, and beyond. It was a wake-up call to the supposed well-meaning white liberals who populate these towns: it’s time to do more. Many Portlanders believed putting up “Black Lives Matter” and “Love Trumps Hate” signs in their yard is enough of a political stance to combat the growing white nationalist activity. But when it comes to real, tangible actions—like calling for justice alongside the family of Larnell Bruce Jr.—white people aren’t showing up.

When they do, they come as part of organizations seeking to capitalize on the painful events without working with the communities and families impacted by police brutality and hate crimes. It’s a frustrating, disturbing trend, especially now, a year out from Larnell’s murder, as Russell Courtier’s trial has been delayed until February 2018 and Larnell’s family continues to wait for justice. White people, with their hand-wringing, their privilege, and their glaring lack of action, are culpable, explained Teressa Raiford, one of the organizers of Don’t Shoot Portland, a group that works for racial justice and police reform.

It was an apt statement that made the crowd nod in agreement. And it was at that moment I saw the hand shoot up in the air. A white woman had raised her hand, thinking it was her turn to speak at a press conference held by women of color about fighting back against white supremacy. The raised hand was followed by a shout, interrupting Raiford and others as they spoke to reporters.

The crowd turned towards the woman, unsure who was speaking. She continued: “Not everyone is like that! You don’t speak for everyone!” People in the crowd shifted in their spots and started shushing and hissing with some yelling out “Check your privilege” and “This isn’t your time!” Another woman bent down to quietly speak with her. The crowd was beginning to be led in chants, starting with “Black Lives Matter.” The interrupter got up to leave, moving silently to the outskirts of the group before she disappeared.

We marched with picket signs in front of the Los Angeles Police Department headquarters with signs such as “Whites for Black Lives,” and “No to Charlottesville” while chanting “No Trump, No KKK, No fascist USA!” After an hour, we gathered to hear several women speakers, including one who spoke against the U.S. Immigration and Customs Enforcement agency’s anti-immigrant detention and deportation policy under President Donald Trump.

After organizers called an end to the protests, 400 to 500 of us continued to march in the streets to Pershing Square and to City Hall to continue the protest. 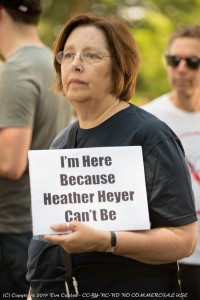 Demonstrator in Boston who spoke for many. Photo: Tim Carter 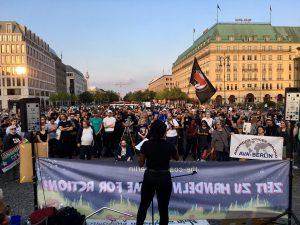 ← Chicago mechanics on strike!
Brexit is a portmanteau →
This work is licensed under a Creative Commons Attribution-ShareAlike 4.0 International License