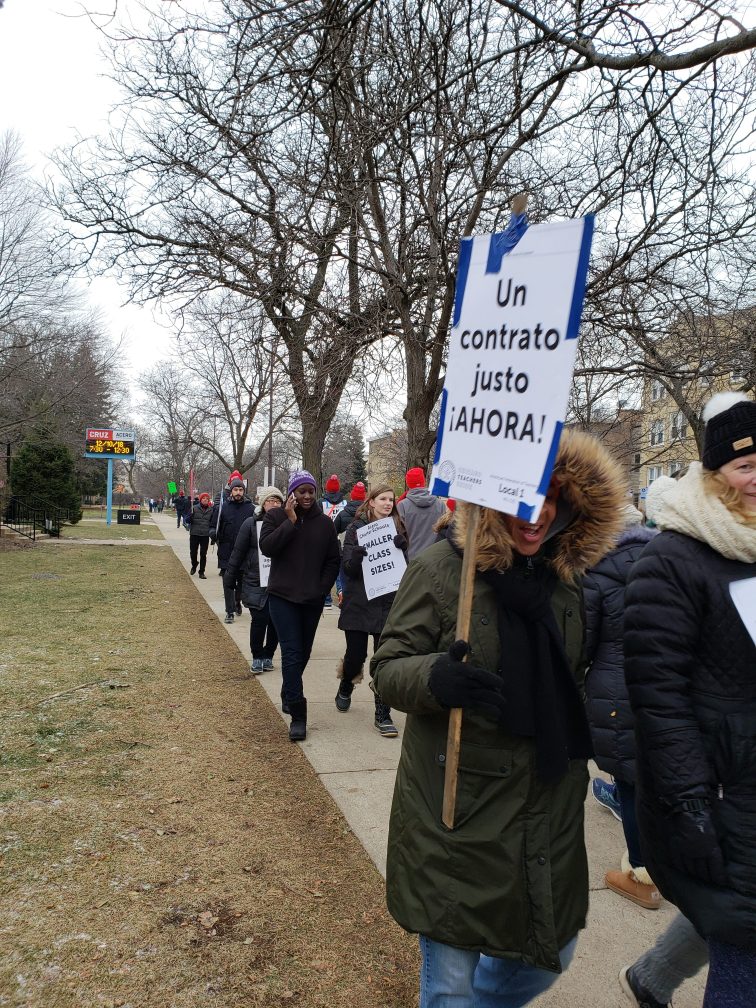 Chicago—This year’s wave of teacher strikes has spread to the first charter school strike in the nation. Teachers struck Acero charter schools on Dec. 4-9, and forced Acero/UNO into a settlement by the weekend. They were demanding more than wages—the teachers are members of a special division of the Chicago Teachers Union, but their pay falls far short of public school teachers.

Sarah spoke for many when she said they walked out to get dollars into the classrooms. The CEO of Acero/UNO, Rich Rodriguez, makes as much as the superintendent of Chicago Public Schools with its hundreds of schools, while the teachers pay for necessary classroom supplies. Sarah, a dance teacher, bought all 50 pair of tap shoes her students were using. A special education teacher, Jody, bought everything her students needed. Teachers were adamant that the paraprofessionals and aides in the school get fair wages as well.

More voices of teachers on the picket line at Cruz K-12 school.

Elementary schoolteacher: We are on strike for two primary reasons. One, fair pay. We are paid less than the average Chicago schoolteacher, especially considering the hours we work. Two, smaller class sizes. Our capacity is 32 kids currently, which is too many kids to handle. The reason for the large class sizes is the more students, the more money the network gets.

Acero serves a Latinx community with a lot of students who come from immigrant backgrounds. As a network serving that community, we need to be able to address what they’re going through in a culturally competent way. That means providing protection, especially in this politically tumultuous time. That means turning into a sanctuary network, with guarantees that data would not be shared with an agency like ICE, something that a lot of families would appreciate.

Every parent I’ve talked to has been supportive. They understand the issues that the teachers are going through because their kids are going through them too. I see an immense amount of support and solidarity from families, from other neighborhood organizations, from political officials throughout the city, and that has been very, very inspiring. 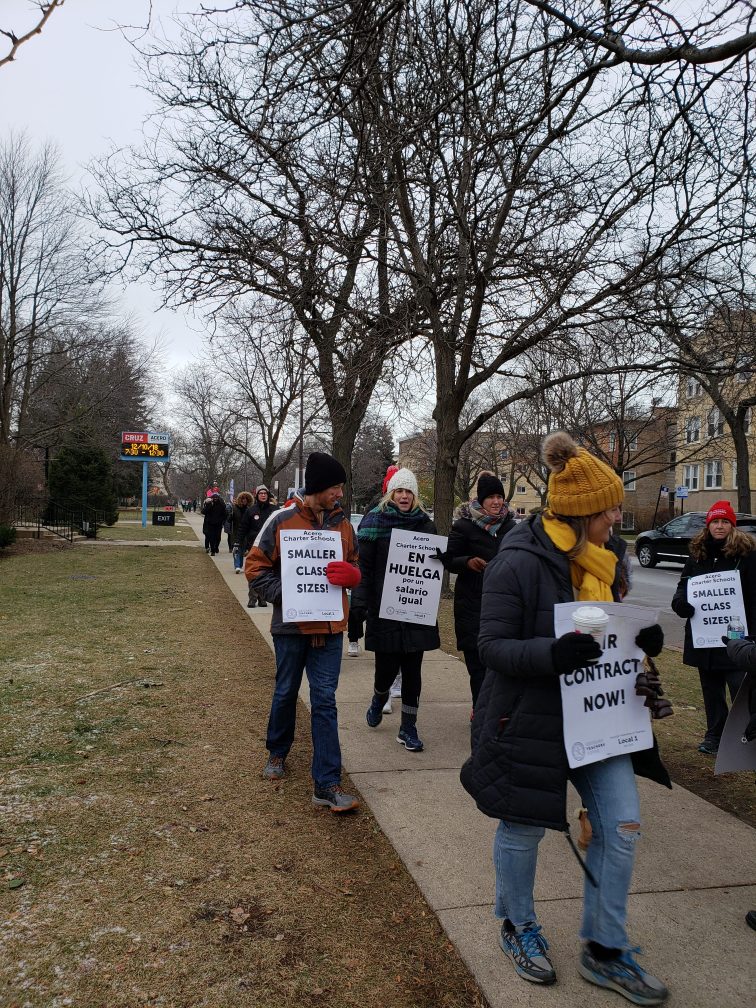 High school special education teacher: We’re on strike because we need Acero to take the money that they’ve been pulling out to spend it back in our classrooms. Our kids aren’t getting opportunities they need and we’re not setting them up for success.

Over the last year, $1 million got cut out of the classrooms. Meanwhile, they’ve got over $10 million in ready cash. So more money is coming into charter schools this year, and less money is being spent on our kids.

Our CEO makes more than the CEO of Chicago Public Schools for about one-fortieth of the students and one-fortieth of the schools. Acero, which is a nonprofit organization, is spending that money trying to build a profitable company using taxpayer dollars intended to educate our kids.

I chose to work in special ed because these are the students who have the highest needs, who are having the most struggle as they come out of school. We have federal laws to protect the funding and the supports that these kids need. But in the classrooms, we’re finding that even the legally mandated supports written in their Individualized Education Programs aren’t showing up in the classrooms, because we’re underfunded and understaffed. We want to be sure that the money that’s being saved in bank accounts in corporate is getting spent in classrooms, so our kids get the aides and have the stability of teachers returning year after year, knowing they have the resources to give these kids the stepoff they need to be successful.

Our network does not have a tradition of off-sending kids because of behaviors, as with with some other charter systems. The problem is that we don’t have the resources to properly support all of these kids. The money’s there, the rights are federally protected, but it’s not showing up in the classrooms. Then we send these undersupported kids out into our communities and they struggle to be successful.

Acero was started with the desire to serve the Hispanic community, to serve immigrants. It’s incredibly important to us that we’re not only meeting their needs through the proper language and educational support, but we’re also guaranteeing protection inside of our schools. We are fighting for sanctuary status for our students, because their parents can’t engage in their communities and build stronger and more successful schools if they can’t trust that we protect their information, protect their kids, and protect them when they come to our schools.

← November-December 2018 issue of News & Letters is now online!
Rally to end war in Yemen →
This work is licensed under a Creative Commons Attribution-ShareAlike 4.0 International License