Editor’s note: This piece originally appeared as an editorial in the May 1967 issue of N&L with the title “The Unending Barbarous War in Vietnam and the Race Question.” Taking up Muhammad Ali’s refusal to be drafted and the Black dimension’s opposition to the Vietnam War, it highlights the hypocrisy of those in the white power structure and their ideologues who viciously denounced Ali at the time but now heap praise on him. More deeply, it speaks to our time when a vibrant movement once again challenges the racism that still pervades U.S. society.

On the same day (April 28 [1967]) that General William Westmoreland came to wave the flag before Congress, Muhammad Ali refused to be inducted into the Army. While the white four-star general was applauded even by the doves, the Black man was, within hours, stripped of his title of World Heavyweight Boxing Champion.

Westmoreland was paving the way for such escalation of the barbarous war that the country would soon reach the point of no return. Muhammad Ali was leaving fame and fortune behind in order to stand up for his convictions and show the world a second America. Yet the one who came to silence dissent (“an unpatriotic act”) got all the glory heaped upon him; the one who stood up for principles was indicted and faces five years in prison and $10,000 in fines.

The “American Dream” is being transformed into the Orwellian nightmare, 1984, not because one white man is praised and one Black man vilified, but because war has exposed the open nerve—”the Black Question”—which has always been the touchstone of American history. It has placed American civilization on trial before the whole world much more seriously than the “war crimes tribunal” in Stockholm. 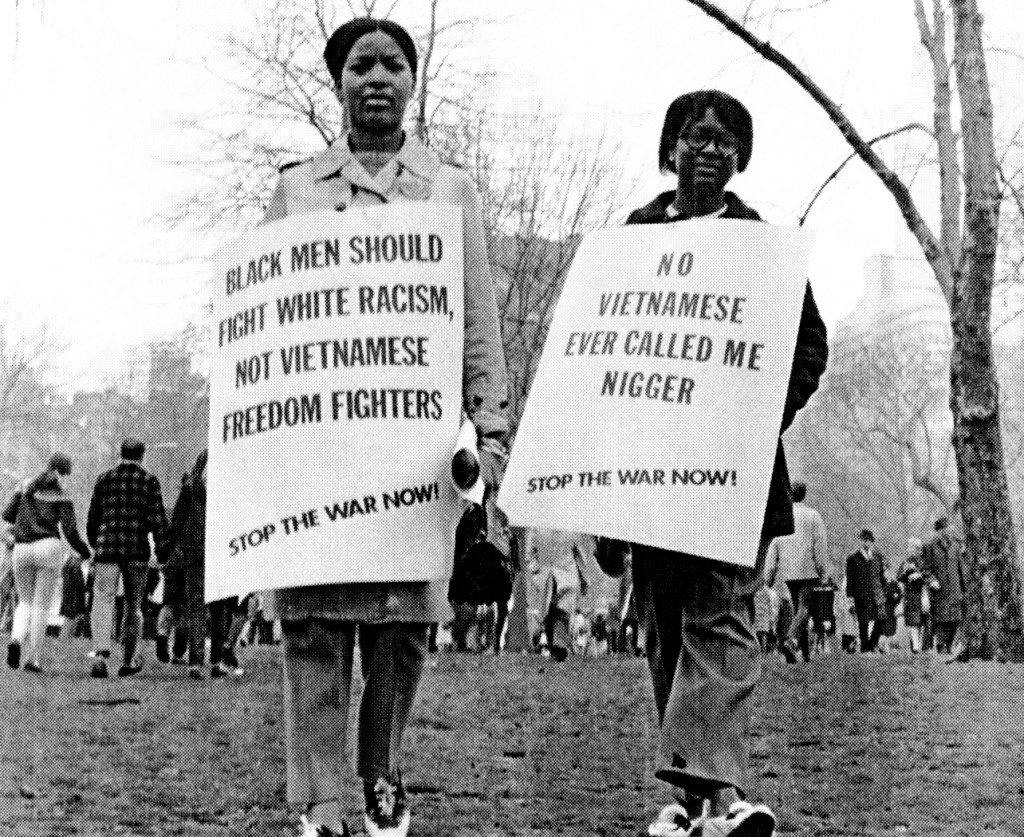 Long before the confrontation between Muhammad Ali and the Houston, Texas induction center—but long after the white anti-war protestors had their anti-war teach-ins and marches and demonstrations—the World Heavyweight Champion was called for a hearing in Louisville, Kentucky, August 23, 1966. Judge Lawrence Grauman tried opening a door to “non-combatant service.” Ali refused: “If it wasn’t against my conscience to do it, I would easily do it…wouldn’t go through all of this and lose and give up the millions that I gave up and my image with the American public that I would say is completely dead and ruined…” Because, however, his conscience didn’t fill any of the nice cubbyholes American justice “recognizes,” Muhammad was refused this way out of war involvement.

Still, were this but an individual way of not participating in that most barbarous of wars, all sorts of other alternatives were open to the World Boxing Champion. As so many other athletes have done, he could have joined the Army Reserves, become a weekend warrior who escapes combat but becomes a darling of the “proper patriots.” Or he could have allowed himself to be inducted and sent on a grand tour of Army camps that would have kept him out of the fighting. He chose, instead, to stand on principles. And when he was, with such unseemly haste, stripped of his title by a boxing commission that had never taken it away from criminals, Ali remarked that this was but a “continuation of the same artificially induced prejudice and discrimination” that he had encountered all his life.

From a different vantage point, another Black who had recently become an open opponent of the Vietnam War and was quickly vilified, attributed the unbridled attacks on him not only to the fact that the Administration is getting nervous about the massive protest against its imperialist policy, but also “because I am a Negro.” Dr. Martin Luther King said this, not because he thinks the war is merely a racist war, but because he knows what white America thinks “the place” of its Blacks should be.

Never before has Administration opposition to dissenters been so vicious as when Blacks began joining the anti-war movement. Rep. F. Edward Hebert, Jr. of Louisiana, a member of the House Armed Services Committee, even had the gall to declare “Let’s forget the First Amendment!”

The Vietnam War did not start as a “racist” war, but for “pure” imperialist purposes—domination of the world by the big powers, be they private or state-capitalist calling themselves Communist. The white-ness of all the contestants for power in shattered Europe following the conclusion of World War II did not eliminate the causes for the Cold War. War hawks, racist or otherwise, are not only against Black fighters against the war, but wish to stifle all dissent, especially the serious Marxist opposition to any capitalist wars.

Nevertheless, this being the U.S.A., born in the lie of color even as it declared “all men to be born free,” consolidating its union a century later through the betrayal of the freed slave, and ending the 19th century through its brilliantly white plunge into imperialism, it is not accidental that the attacks on opponents of the of the Vietnam War today reached a new virulence when Blacks joined the massive anti-war protest April 15.

Consider this: President Johnson was satisfied at first with his own references to “nervous Nellies” and J. Edgar Hoover’s diatribes about “Communist influenced” draft card burners, although opposition to the Vietnam War covered the spectrum from Senator J. William Fulbright to Stokely Carmichael. There were times even when Johnson permitted himself to talk as if he had ever been a dove. Today, on the other hand, he allows himself to inspire such bigoted outbursts about the need to violate the Constitution itself as come from Rep. Hebert who refers to Black dissenters as the reason for the need to “clean up this rat infested area.” At the same time LBJ feels impelled to draw direct from the battlefield the square-jawed, patriotic, smartly saluting military commander.

Why? Because even the Republican Policy Committee issued a criticism of his conduct of the war? Not at all. He knows this is politics, and he would do as much if he were out and the Republicans were in. He knows very well that he can expect them “to rally around the flag, boys,” napalm or no napalm, in or out of office. But the youth, those who do the actual fighting and dying, of those he is not at all sure.

His nightmare, and rightly, is seeing that, where Stokely Carmichael, as Black Power advocate, has no mass following, Stokely Carmichael as “Hell no! We won’t go!” is beginning to have such a following. It isn’t the fact that Stokely “won over” Dr. King that worries him, but that Rev. King is expressing a deep felt opposition to war in the whole Black community.

Worst of all, the masses who could not identify either with Carmichael or Rev. King, do find something in Muhammad Ali’s quiet courage as anti-war opponent, something they didn’t see in him as Black Muslim.

When Muhammad Ali says quietly, “I have won the world heavyweight title not because it was ‘given’ to me, not because of my race or religion, but because I won it in the ring through my boxing abilities,” a new world of one’s own suppressed talents opens up before them. And he hears better not only his own aspirations, but those of the Vietnamese peasants who want to determine their own lives, freed of American occupation. In fact, and in affinity of ideas, this is the point of solidarity between the Black, and the Vietnamese! It cannot be sundered apart until the war itself ends.

BRING THE TROOPS HOME! THE WAR TO BE FOUGHT IS THAT ON RACISM AND POVERTY, NOT ON STRATEGIC FOOTHOLDS AND A WAR IN ASIA!

Marxist-Humanism and the Black liberation movement

Marxist-Humanism’s unique relationship to the Black liberation movement was evident at the founding of News and Letters Committees in 1955. The organization’s Constitution states: “We feel that the Black masses occupy a place of special significance in American life. Their struggle for equality and justice, which is taking place every day in every city of the country and increases in tempo and effectiveness, stands in the forefront of the struggle of all oppressed people for full freedom. Since the 1960s the Black Revolution is one more proof that the Black masses—men, women and children—are vanguard in the American Revolution.”

Charles Denby, a Black production worker originally from Lowndes Country, Alabama, became the Editor of News & Letters from 1955 until his death in 1983. His autobiography, Indignant Heart: A Black Worker’s Journal (1978), an expansion of his original 1952 Indignant Heart, is a history of the Black struggle for freedom in the U.S. and the place of the Left within that struggle.

During the Civil Rights Movement, members of the organization were active in the fight and, with the principle that people involved in struggle speak for themselves, produced several pamphlets, including Freedom Riders Speak for Themselves (1961), The Free Speech Movement and the Negro Revolution (1965), and Black Mass Revolt (1967).

In 1963, Raya Dunayevskaya, the founder of Marxist-Humanism, wrote American Civilization on Trial: Black Masses as Vanguard. It traces the challenge to American Civilization given by Black Americans at every historical turning point from the struggle of the Abolitionists to our day. So important did we consider this history that we added it to our Constitution as one of the “theoretical foundations” of News and Letters Committees.

John Alan, a Black activist, intellectual and well-known documentary movie maker in the San Francisco Bay Area, who wrote the column “Black/Red View” for over 30 years in News & Letters, authored Dialectics of Black Freedom Struggles: Race, Philosophy and the Needed American Revolution in 2003. This work builds on American Civilization on Trial.

News & Letters, throughout its 61-year history, has printed Black activists and theorists speaking for themselves. This issue carries the voice of Jasmine ”Abdullah” Richards. Black, brown and white prisoners write their own articles in every issue. Raya Dunayevskaya’s article from her archives printed above takes up Muhammad Ali, racism and the movement against the Vietnam War.

The Dialectics of Black Freedom Struggles. To order, click here.

Dunayevskaya’s Archives, available at www.rayadunayevskaya.org, are a rich source of the history of thought and activity of the Black movement for freedom in the U.S. and Africa.

← Union deal with Uber betrays drivers
Philosophic Dialogue: Dialectic of the party or dialectic of philosophy and organization? →
This work is licensed under a Creative Commons Attribution-ShareAlike 4.0 International License