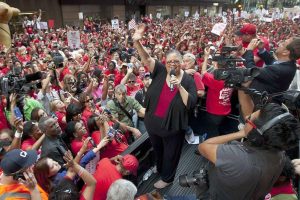 The City of Chicago lost a powerful voice for teachers, and for workers in general, with the death of Karen Lewis, former President of the Chicago Teachers Union (CTU). She was the face of militant opposition to the welcoming of corporate profiteering at the expense of education, students and teachers.

The opposition within the CTU called CORE (Caucus of Rank-and-File Educators) defeated a union leadership in 2010 that had not pushed back against the “education reform” of Mayor Richard M. Daley. He had opened the door to private charter schools by shuttering dozens of high schools and elementary schools in Black and Latinx neighborhoods. He then scapegoated the teachers in those schools, firing them all.

Just two years later in 2012, Lewis led the seven-day CTU strike to victory with enthusiastic participation from parents and students that obstructed then-Mayor Rahm Emanuel’s plans to rapidly privatize the public schools. There were rallies of thousands of teachers and supporters every day of the strike. That strike built on the momentum of renewed militancy in defense of union rights in 2011 against attacks by Tea Party legislators—thousands of unionists had gathered to commemorate Haymarket martyrs 125 years later, 20 times the number present 25 years earlier.

When Karen Lewis got a diagnosis of brain cancer just as she was expected to run for Mayor in 2015, Chicago lost out.

For four more years Emanuel was able to treat the schools and the city with the same open contempt he displayed toward Lewis. Karen Lewis was loved, partly because Emanuel hated her, but primarily because she represented the power of rank-and-file unionists standing up.