Chicago—On Oct. 13, three days after bombs killed 102 people at a peace march in Turkey’s capital of Ankara and mangled over 400 more (see article, p. 12), protesters gathered in Chicago to express their rage. The crowd, largely ethnic Kurdish immigrants from Turkey, formed a picket line near the Turkish consulate to inform passersby about this massacre. With signs and chants we condemned the complicity of President Erdogan in the mass atrocity. 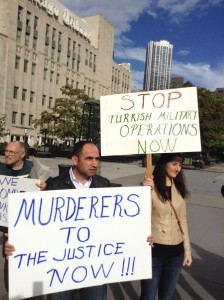 One picketer said he disliked the sign that said “Fight ISIS,” even though he was all for fighting ISIS—his concern was that Erdogan would hide behind that slogan to continue to attack Kurdish militants.

A young woman holding a sign reading “Peace Will Win” said that peace marchers had gathered right in front of the Ankara Central railroad station, where you could expect security to be heavy on an everyday basis. Yet for a march of Kurds who were demanding an end to escalating army attacks on Kurdish communities and groups like YPG, security was lax enough to allow hundreds of people to be killed and wounded.

She also pointed out that Erdogan’s party had lost support in the June election, and that in the new election some of his supporters would cheer attacks on Kurds. “About 30% of the people in Turkey are Kurds. But if that decides where you stand, what side of the line am I on, with my Kurdish mother and my Turkish father?”