In 2011, I was in a delegation to Honduras. We were present at a protest march along a major highway next to the Palmerola air base, the U.S. “unsinkable aircraft carrier” in the center of the country. It was June 28, the second anniversary of a military coup d’etat carried out by Romeo Vasquez, a Honduran Air Force General trained at the U.S. Army School of the Americas near Atlanta, now renamed Western Hemisphere Institute for Security and Cooperation. The protest was called by popular resistance organizations comprised mostly of Afro-Hondurans, Indigenous Hondurans and Honduran campesino farmers. 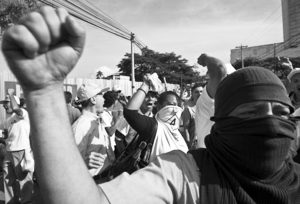 Demonstration at the presidential house in Tegucigalpa, capital of Honduras, on June 28, 2009, calling for the release of Honduran President Manuel Zelaya.

One of the main problems facing these groups, both before and after the coup, is that corrupt governments issue multiple titles to the same plot of land. Also, there is an unenforced law that says if land goes unused, the Honduran state is supposed to buy it and resell it on credit to farmers who need land. Finally, there is not much recognition of the fact of Indigenous peoples’ original ownership of all land in the Americas and of what that necessarily implies.

Instead, wealthy individuals and corporations are allowed to use Honduran land for export industries, mostly to the detriment of local communities. Many also have private armies and intimidate people into selling their land. The sum of the problems is a formidable barrier to people’s ability to acquire and hold land with which they could produce for themselves.

Yet the popular organizations have been able to hold land through defying eviction orders. They have acquired land through direct actions—such as blocking highways and access to mines and cropland. As would be expected, resistance is often met with violence.

Our delegation also went to a remote farming town called Rigores which was under an eviction order. A few weeks earlier, about 100 homes had been burned by the military and police. Many of the townspeople were sleeping outside or huddled in a small community center. As the delegation was viewing the wreckage, soldiers arrived at the edge of town. Smoke was already rising over the horizon, but upon seeing our group, many with cameras, the soldiers approached us slowly, acting cool. One of our delegation was able to engage the commander in conversation over the questionable legality of the eviction, stalling until media could be alerted. Shortly after reporters arrived, the soldiers left.

We stayed for several more hours, speaking with people in the town. One grandmother became tearful, wondering whether soldiers would return after we left. I realized that racial and class privilege might sometimes be commandeered to further liberation, but always as blunt instruments with limits that are unclear. Audre Lorde’s words came to mind: “The master’s tools cannot dismantle the master’s house.”

Popular attention and support ensured that Rigores was not destroyed again and many houses have been rebuilt.

Replicating small successes like in Rigores will be a function of the level of participation in popular struggle and of the army’s ability to inflict terror with impunity. As long as the U.S. keeps funding the Honduran police forces, that ability will be very strong, unless people in the U.S. and other countries can effectively transform society including their governments to emphatically reject systems of domination.

← Canada’s election: a sense of uncertainty
Rally against murders of Trans people of color →
This work is licensed under a Creative Commons Attribution-ShareAlike 4.0 International License