Among feminists, there is a resurgence of interest in the late theorist and activist Andrea Dworkin. They discuss her books, speeches, interviews and talk show appearances. Disillusioned with a liberal feminism that congratulates women on any of our choices, they want to investigate radical feminists asking difficult questions about creating a humane society in which women are treated as fully human.

Last Days at Hot Slit: The Radical Feminism of Andrea Dworkin edited by Johanna Fateman and Amy Scholder (Semiotext(e), March 5, 2019) is an introduction to Dworkin’s work. The editors chose samples from her books and speeches showing how her “oracular voice helped to shape the feminist organizing of the late 1970s and ’80s.” 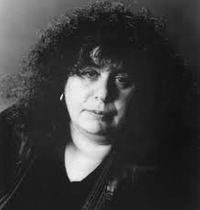 A victim of rape, domestic violence, and prostitution, Dworkin used her ambition as a writer to “make sense of what had happened to me.” These writings reveal violence against women as the philosophical basis of patriarchy. She exposed patriarchy as an essential part of fascism and as interconnected with racism and classism. She warned that violence, especially towards women, was going to increase. Dworkin kept speaking, writing, dealing with hatred aimed at her, and listening to painful stories of women who confided in her. She had confidence our struggles could result in a better future.

Many call Dworkin prophetic in explaining pornography’s function as patriarchal propaganda dehumanizing all women. Like her, feminists today feel “politically homeless” with misogyny coming from both Left and Right. They realize supporters of the status quo will stereotype women like Dworkin who ask difficult questions as “manhaters” and “anti-sex.”

Dworkin maintained her confidence in men’s ability to have new, equal relationships with women and form a view of sexuality as loving and mutual. The most common lie about her is that she believed all intercourse (even all sex) is “rape.” The editors include the foreword to the second edition of her book Intercourse, where she scrutinizes this avoidance of her analysis. She had analyzed the works of respected male writers, exposing their patriarchal notions of intercourse as a natural and necessary act of domination. In excerpts from Pornography: Men Possessing Women, she exposes how various genres of pornography repeat the notion that sex must be violent but promise that women really love being hurt.

In the excerpt from Mercy: A Novel, Dworkin revisits her time in prostitution. In her blunt style, inspired by countercultural male writers she idolized, she contrasts their descriptions of “adventurous” sex with prostitutes with what the women actually experience. This should enlighten anyone viewing Dworkin and fellow anti-prostitution feminists as “whorephobic” or “SWERFs (Sex Worker Exclusionary Radical Feminists).”

In excerpts from Right-Wing Women, Dworkin analyzes the writings of anti-feminist women to understand why they would campaign against their own self-interest. She viewed them with compassion in their futile struggles to find safety, security, and meaning in authoritarian family structures.

This book is a valuable step towards a feminist movement ready to return to serious issues but with discussion instead of polarization.

← Women as reason: Women, terrorism and misogyny
Deborah Morris 1946-2019 →
This work is licensed under a Creative Commons Attribution-ShareAlike 4.0 International License