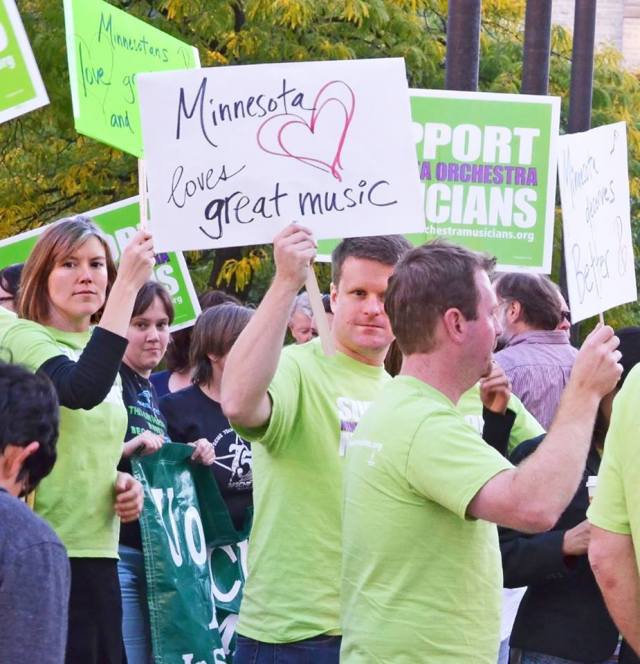 Negotiations began in April of 2012, but fell apart after musicians refused to accept pay cuts of up to 40%. The 2012 and 2013 seasons were canceled, while a $50 million Orchestra Hall renovation went on as planned.

Minnesota has a 150- year tradition of strong support by the capitalist class for culture and the arts. However, the Daytons, the Pillsburys, and other old-guard capitalists failed to observe that many of the new generation of entrepreneurs and managers in Minnesota and the Upper Midwest have been captivated by Tea Party economic and social doctrines.

Jon Campbell, the Board chairman of MOA during the lockout, is an executive vice president at Wells Fargo; Richard Davis, the Board’s lead negotiator during the strike/lockout, is the U.S. Bancorp CEO. Both men had never taken part in labor negotiations before. They simply demanded that MOA slash $5 million in annual expenses. When the strike by the musicians began, these bankers saw nothing but the Red Apocalypse.

In December 2013, State Senator John Marty and others called for an end to the lockout and the resignations of Davis and board chairman Campbell. They accused management of manipulating “financial results in a deliberate deception of the public, first to gain public funding for Orchestra Hall, and then to justify locking out the musicians for well over a year.”

The orchestra became the unwitting image for labor strife in the classical music world. At one point management said it was willing to let music director Osmo Vänskä quit (and thus smash his artistic career) if that was the price for achieving its goals.

My sister and I attended a number of solidarity concerts and rallies in support of the striking, and then locked-out, musicians. We were deeply impressed by the quiet dignity and firm commitment of these rank-and-file workers.

One of the key issues in this strike and lockout was the demand by management that the musicians not share in the profits associated with sales of recordings in the digital or new-media spheres. Management demanded all such royalties to itself alone. These workers, however, and their union, would not give up the rights of creators. I think they should be commended.

This is an ongoing struggle, as Google and other mega-corporations are attempting to alter copyright laws in the U.S., Britain and elsewhere. They want to profit from the work of artists and writers, but do not want them to make anything but a token honorarium.

Osmo Vänskä resigned on Oct. 1, 2013. On Oct. 4-5, he conducted three final concerts with the locked-out orchestra at the University of Minnesota’s Ted Mann Concert Hall. Emanuel Ax took the solo part in piano concertos by Mozart and Beethoven, and the program ended with Stravinsky’s Firebird Suite. As an encore, Vänskä conducted Sibelius’s Valse Triste, which he described as a dance of death. At his request, the audience withheld applause afterward; many people left in tears.

The St. Paul Chamber Orchestra (SPCO) had its own labor dispute, with management locking out its musicians in November 2012. The sides came to an agreement in April of 2013.

Now, with the end of the lockout, Campbell and Davis are leaving the Board of MOA. However, their ideas are not leaving with them. The strike and lockouts of SPCO and MOA musicians revealed, in a focus that would not have been possible without union and community solidarity, the Tea Party destruction of nonprofits everywhere in Minnesota and in the U.S. It is a new barbarism that seeks to uproot the present and the past. We will never understand the past, unless we catch the future in the present.