From the March-April 2012 issue of News & Letters

In the Maldives, a country of hundreds of islands in the Indian Ocean, a Feb. 7 coup overthrew the country’s first democratically elected president, Mohamed Nasheed.

As a long-time pro-democracy activist, Nasheed was imprisoned 16 times and tortured under the previous Gayoom regime. As president, he was an internationally recognized leader on climate issues, speaking on behalf of small island states like the Maldives, whose highest natural elevations are about three feet above sea level, facing extinction from rising sea levels. He had set the Maldives on a path to become the first carbon-neutral nation.

The coup was headed by Vice President Mohamed Waheed Hassan, backed by a mutiny of elements in the police and military, who attacked the main military base in Male’, the capital, and took over the state broadcaster. 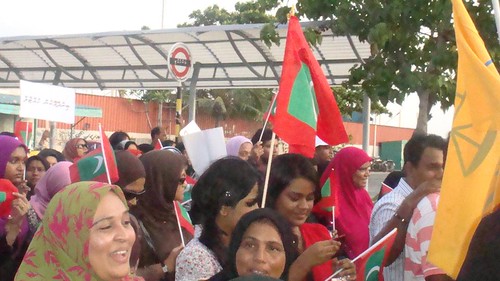 As the new president, Waheed has appointed figures from the former dictator Gayoom’s government, which had been agitating against Nasheed’s attacks on judges who protect corrupt Gayoom allies. Whipping up a violent atmosphere, Waheed adopted their anti-Semitic, Islamist rhetoric and branded Nasheed supporters traitors and terrorists.

Within a day after the coup, 500 democracy supporters had been thrown in jail, and dozens more were in intensive care in the hospital. The headquarters of Nasheed’s Maldivian Democratic Party (MDP) was trashed, and its staff was brutally beaten.

Thousands of people, including a large number of women, flooded the streets to oppose the coup. An arrest warrant was issued for Nasheed, and the new home minister pledged to send him to jail for the rest of his life, but hundreds of supporters massed outside his home, preventing his arrest. Protests are continuing. On many islands, anti-coup protesters attacked police officers and burned or closed down police stations.

In a “Women’s rally for justice” on Feb. 24, hundreds of women joined by dozens of men marched across Male’ chanting, “Tyrant Waheed, Resign,” before joining a MDP rally of 8,000.

Following a Feb. 26 protest in Addu City, women’s rights activist Shiyara Mohamed said, “It was just around 100 people, and most were women. We were standing near the police barricade and calling for Waheed’s resignation when all of a sudden the Star Force charged from behind us and tear gassed the whole area without any warning.” Women were beaten with batons and boots.

The U.S. and India immediately recognized the coup as “constitutional.” They are pressuring Nasheed to call off protests and join in a “national unity government.” Soon China too expressed support for Waheed. India, with U.S. backing, is competing with China for a commercial and military foothold in the strategically located Maldives, just southwest of India’s tip.

In an op-ed piece in The New York Times, Nasheed acknowledged his mistake in not purging the military of Gayoom allies. He warned the people of Tunisia, Egypt, Libya and Yemen, “Long after the revolutions, powerful networks of regime loyalists can remain behind and can attempt to strangle their nascent democracies.”

However, he is betting on new elections to bring him back to power. He has not confronted the fact that democratic elections in themselves cannot substitute for a revolutionary self-organization of the masses from below. Elections are not enough to dismantle the exploitative economic relations and corresponding organs of violent coercion, which are what enabled the coup. On Feb. 7, when military “officers on my side then begged me to open the weapons vault,” Nasheed refused in order to avoid bloodshed. It was already too late.

← Coal and Its People
Philosophic Dialogue: On the 1953 letters →
This work is licensed under a Creative Commons Attribution-ShareAlike 4.0 International License