The protests in Minnesota over the Enbridge Line 3 pipeline are the latest front in a long struggle. It is part of the decolonization and liberation struggle of Native Americans. At the same time, it is part of the movement to confront climate change, and to make sure it is done in a way that benefits Black, Indigenous and People of Color, women, workers and youth, rather than narrowly aimed to help capital. 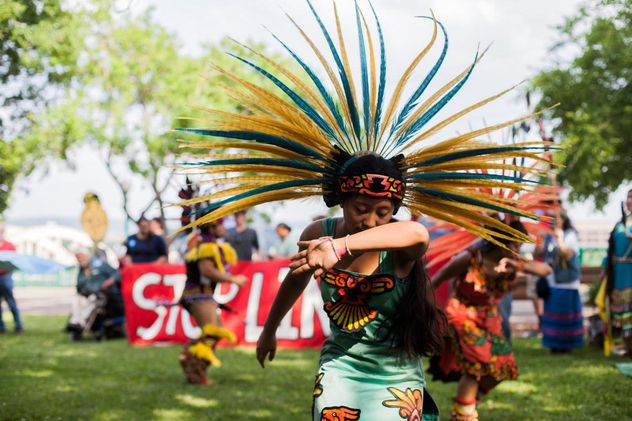 The June 5-8 Treaty People Gathering of thousands of water protectors was followed by a march to the Mississippi River headwaters, establishment of the Fire Light Camp, and a pump station blockade. They were assaulted by police—federal as well as from multiple counties and states—and 247 were arrested. A low-flying Customs and Border Protection helicopter was used to harass water protectors, prompting an internal investigation of this abuse. Police, who are being funded by Enbridge, also wielded a sound cannon known to cause injuries.

These dramatic actions drew attention to a years-long resistance to Line 3, led by Indigenous women and Two-Spirit people. After construction began in November, resistance camps were set up beginning in January in the frigid northern Minnesota winter. Other recent actions included an April 1 Indigenous youth rally in Washington and a campaign to pressure banks not to finance the pipeline expansion.

Enbridge calls this a “replacement” of the Line 3 pipeline built in the 1960s, but the new pipeline is being built along a new 340-mile path and would nearly double Line 3’s current capacity. It would carry 760,000 barrels of diluted bitumen daily from Alberta’s tar sands to Superior, Wisconsin.

The land it crosses in Minnesota is mostly treaty land where the Anishinaabe people have hunting, fishing, and gathering rights. Wild rice, which the Anishinaabe gather for both sustenance and culture, grows in lakes and rivers in much of Minnesota. Many of its habitats are at risk from construction as well as climate change and pollution, and even more from potential spills of tar sands oil. Line 3 has suffered major spills, including 1.7 million gallons in Grand Rapids, Minn., in 1991. Enbridge is also responsible for the 2010 spill in the Kalamazoo River in Michigan, which, after over $1.2 billion of cleanup, is still contaminated.

Women in the struggle call attention to the sexual violence and trafficking associated with the “man camps” of pipeline construction workers, almost all male, where machismo and rape culture prevail. (See “Women WorldWide,” March-April 2020 N&L.)

In 2016, the struggle at Standing Rock over the Dakota Access Pipeline manifested a new chapter in revolutionary Indigenous movements and gave impetus to Indigenous and anti-extractivist movements worldwide. “I think that the resistance to the Dakota Access pipeline set the tone for the rest of the environmental movement,” said Tara Houska, one of the Line 3 resistance leaders.

Some of the Standing Rock veterans, like Houska, are participating in the Line 3 movement. These and other struggles, like the fight to stop the Trans Mountain Pipeline in Canada, brought to the fore the clash between the reach for liberation and an entrenched system holding onto its exploitative ways even at the price of climate chaos.

These movements defeated the Keystone XL, another tar sands oil pipeline, and Enbridge Line 5 is on the ropes. Trans Mountain was only saved—for now—by being nationalized by Canada’s federal government. But the Biden administration, which could easily have shut down Dakota Access, refused to take action, and is defending Line 3 in federal court. This would commit the U.S. and Canada to decades more tar sands emissions at the very time when even such oil-friendly establishment organizations as the International Energy Agency declared that it is urgent to stop new fossil fuel developments immediately. Yet under capitalism, governments from Biden’s to the Chinese Communist Party’s keep pushing new developments while promising to transition away from fossil fuels.

The sense of urgency the state lacks there has been shown instead in the passage of a raft of laws criminalizing protest and designating fossil fuel extraction, processing and distribution sites, including pipelines, as critical infrastructure.

Where the state sees criminals interfering with oil profits and the material structure of capital, Indigenous activists see a struggle for decolonization and sovereignty, against what some like Houska call “cultural genocide.” The climate movement has developed tremendously in the past two decades, and one of the most important changes is the rise of a new generation, many of them women of color where previously white men dominated.

That is closely linked to the self-construction of the Indigenous Subject of revolution, as seen in movements like Standing Rock and Idle No More, and also in a new crop of revolutionary books like Our History Is the Future: Standing Rock Versus the Dakota Access Pipeline, and the Long Tradition of Indigenous Resistance by Nick Estes, The Red Deal, and Red Nation Rising. Front and center is a vision that goes way beyond stopping pipelines to the construction of a new kind of sovereignty that breaks with capitalist economics and relationships, recaptures traditional ecological knowledge worked out over millennia of experience, and transforms the relationships of human beings to nature and to each other.

Say no to Line 3 and yes to a new human society!

← From the Writings of Raya Dunayevskaya: Need for a Total Uprooting: Down with the Perpetrators of the Palestinian Slaughter
Woman as Reason: Abortion rights at crossroads →
This work is licensed under a Creative Commons Attribution-ShareAlike 4.0 International License