The coup to protect corrupt Congressmen and to oust the progressive Workers Party of Lula da Silva and Rousseff from power continues with Interim President Michel Temer, Dilma Rousseff’s Vice President before she was impeached, and his all-male, all-white cabinet. Rousseff will be put on trial in the coming weeks. But sharp divisions within Brazil have a longer history.

TRY ANYTHING BUT SOCIALISM 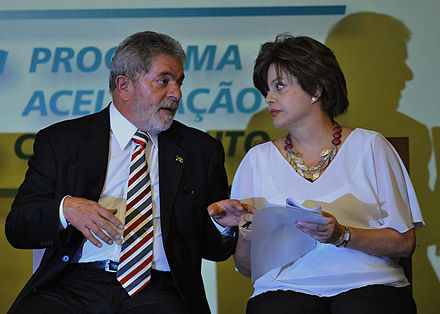 Dilma Rousseff and President Lula during the Growth Acceleration Program in November 2009.

Industrialists and businessmen were happy to work with state management instituted by the Workers Party under Lula on the capitalist Brazilian economy as a substitute for a movement toward authentic socialism with workers’ control and peasant self-determination. When the price of oil and other export commodities fell, these representatives of capital began to favor savage neoliberalism.

State management of the economy (a form of state-capitalism) went hand in hand with the Party’s efforts to demobilize the very social forces that carried them to power. Mobilization in the street was ceded to the Right, particularly to the emergence of a conservative student movement at a number of universities. A neoliberal militant Right, for whom the state is anathema, arose.

Brazil has a long history as a colonial society, particularly persistent racism, despite claims of being a multicultural society. Lula did greatly reduce poverty among the Afro-Brazilian population. However, as the Latin American political chronicler Raul Zibechi notes:

“Now there is a clear ethnic divide between afro-descended people in the North and urban peripheries, and the white middle classes of the South and Southeast, an odious update of racism and discrimination–to the point that opponents of the government argue that there was no racism in Brazil before [!!], and that it began when the Lula government implemented quotas for black people in universities.”

The question is: Is the parliamentary state-centered Left of the Workers Party the only alternative? Can social movements from below begin a reconstruction, a deep emancipatory project? ­