Amy Tuteur, a feminist and retired obstetrician, urges us in Push Back: Guilt in the Age of Natural Parenting (Dey Street Books, 2016), to push back against the “natural parenting” movement purporting to be radically feminist. Natural parenting consists of natural childbirth, attachment parenting and lactivisim. While some of these practices can be harmless, the movement uses pseudoscience to deliberately make mothers who can’t perform all of them feel extremely guilty. 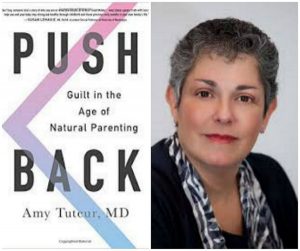 Tuteur writes that it began with laudable, feminist goals as an extension of the feminist health movement which educates women about our own health and how to take part in our own medical decisions. It won rights for women such as the option of staying awake during labor. After achieving its goals, the natural parenting movement moved the goalposts so its advocates could sell products and services and its followers could feel superior to other mothers.

Promoters of natural childbirth point out that male doctors demonized midwives and then medicalized childbirth for financial gain. Once, mothers and newborns were more likely to die from unsanitary hospital conditions. But improvements in medicine transformed childbirth from the feared leading killer of young women and babies into a historically new situation in which their survival and health are taken for granted.

Some advocates of natural childbirth now employ the fallacy that everything “natural” is healthful. They idealize traditional cultures when birth was “woman-centered,” ignoring that many obstetricians are now women. They falsely claim that birth was always safe and that lifesaving techniques such as fetal monitoring, pain medications and Caesarean section are dangerous. (I would add that they also tend to idealize traditional, “woman-centered” herbal abortions.)

They claim medicalization is why women of color in the U.S. have the highest rate of mother and infant mortality in the developed world when it is really because they have trouble accessing adequate medical treatment, including prenatal care.

This movement urges women to focus on the supposed “empowering experience” of birth, selling increasingly dangerous experiences such as giving birth at home, in a pool of water or with dolphins. While women in the Western world compete in what Tuteur calls the “performance art” of “stunt births,” women in developing countries struggle for lifesaving access to hospitals.

Tuteur compares attachment parenting to what feminist author Betty Friedan called the “feminine mystique,” i.e., the 1960s notion that mothers should spend all their time on housekeeping and child rearing. She says it’s more accurate to call it intensive mothering, because it is the mother who must keep the baby with her at all times.

Breastfeeding, even with the help of a breast pump, also takes up an unnecessary amount of time. Lactivists have gone past the benign goal of making breastfeeding an acceptable choice to spreading scorn for women who cannot continue to breastfeed, even when it is painful or does not produce enough milk.

Tuteur states, “The backlash against the emancipation of women has been expressed on the political right as a rise of religious fundamentalism and on the political left as the rise of natural parenting.” The notion that birth is safe and painless comes from Grantly Dick-Read and Fernand Lamaze, two racist, sexist men who wanted women to stay in the home and white women to produce more children.

Today’s leading proponent of this notion is Ina Mae Gaskin, the wife of a cult leader at a patriarchal commune called The Farm, where the only skill women were allowed to learn was midwifery.

Push Back is an important book in that it will save lives. It is also important because it challenges us to research the possible right-wing origins and implications of practices and ideas that we believe to be unquestionably feminist or Leftist.

2 thoughts on “Push Back: Guilt in the Age of Natural Parenting”

← The need for new beginnings in thought and in action
Trans theatre a hit! →
This work is licensed under a Creative Commons Attribution-ShareAlike 4.0 International License