On Sept. 20, 150 police showed up at 6:30 AM at the House of Resistance in Bure, France. It is the latest incident of repression against growing opposition to “permanent” burial of France’s high-level radioactive waste (HLRW); including a deep geological HLRW dump in the area. The police arrested two and held citizens in their trailers and rooms for 10 hours. 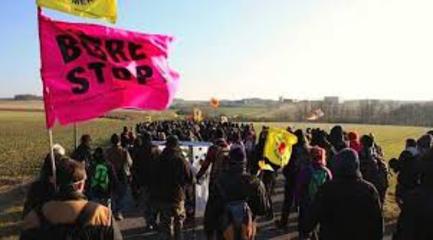 According to the House of Resistance: “The cops seized practically the whole office…including the photocopier (luckily they didn’t take our cat) and loads of other stuff. Windows were smashed, doors forced, one person detained, habitants intimidated, police checks, houses quite far from Bure also raided and people were asked questions about their private life.” Other locations raided simultaneously included Lumeville, Commercy, Verdun and Mandres.

For many years, the Bure House of Resistance served as the hub of local opposition to a national nuclear waste research center established 20 years ago, which is now, by law, the permanent disposal site (CIGEO). The last six years have seen regular peaceful marches and demonstrations against the planned dump. As far back as 2012 in dynamic clashes with masked resisters the police used tear gas, pepper spray and flash grenades, resulting in serious injuries.

The nuclear waste agency began clearing trees before obtaining necessary permits; but the locals forced them out of the woods in the summer of 2016. Since then the critical forest site has been occupied by resisters. The “owls,” as they call themselves, have built tree houses and shacks in the woods to establish residency. As one disenchanted French person said: “Thanks for shooting our future.”

September’s raids were a setback to anti-nuclear activism, but the activism certainly will continue.