So overwhelming has been the past year’s flow of revelations about the U.S. government’s spying on virtually everyone that even President Obama’s hand-picked review panel had to acknowledge it. The Dec. 18 report by the Review Group on Intelligence and Communications Technologies tacitly responded to widespread outrage with 46 recommendations, including that the National Security Agency (NSA) should halt its blanket collection of U.S. phone call records.

Though noting the potential for abuse of the state’s mountains of covertly gathered data, nowhere does the report by Obama insiders grapple with the question of just what sort of totalitarian instrument the militarized top secret government has become. 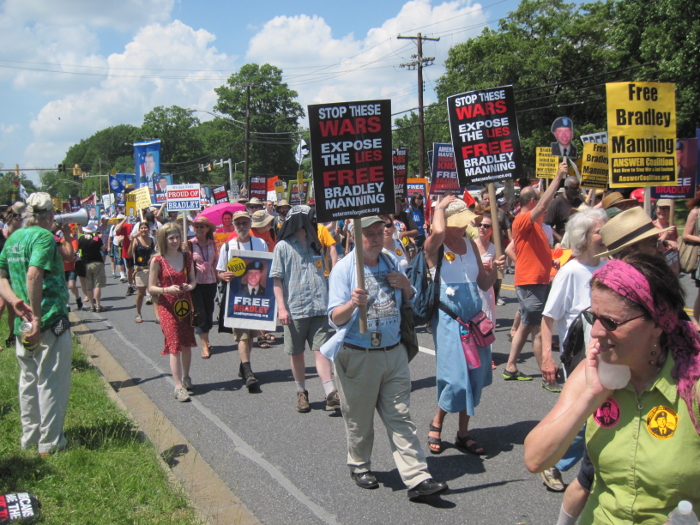 One of the thousands of demonstrations around the U.S. and the world in support of Chelsea (formerly Bradley) Manning. This one with 2,000 was held June 1, 2013, in Fort Meade, Maryland, where Manning’s trial took place last year. Photo from Philadelphia Regional Anti-War Network http://www.prawnworks.net/rlg/2013/Brad-Manning-130601.html

Indeed, while the review group repeats with a straight face the administration’s pretense that it is all about protecting Americans from terrorism, that is clearly not the preoccupation of a massive apparatus whose targets include international aid organizations, UN climate change negotiators, senior European Union officials and foreign energy companies–not to mention German Chancellor Angela Merkel, who compared the NSA to East Germany’s infamous secret police, the Stasi; and Brazilian President Dilma Rousseff and her aides, leading to her sharp denunciation at the UN of this “breach of international law.” Citizens of France and Spain learned that over 60 million calls were monitored in each country in one month.

The scope of surveillance by the NSA, just one of at least 16 U.S. intelligence agencies, is staggering. Secret documents released by then NSA contractor Edward Snowden show that the NSA collects–in the millions or even billions–cell phone locations, text messages, credit card transactions, computer keystrokes, emails, contact lists (address books), and telephony metadata (including numbers calling and called). The NSA’s Special Source Operations group alone has been reported to store the equivalent of the Library of Congress every 14.4 seconds.

The administration has little to say about reported NSA abuses such as:

In some cases the NSA pretends that only non-citizens outside the U.S. are monitored, but the documents also reveal that the agency routinely evades such restrictions. According to Snowden, “we are collecting more in the U.S. on Americans than we are on Russians in Russia.”

Logo of the NROL-39 satellite of the National Reconnaissance Office.

It has been the practice of every capitalist state’s repressive apparatus to point the finger abroad to attack the class struggle and other freedom movements at home. “Terrorism” is today’s equivalent of Joe McCarthy and J. Edgar Hoover’s “Communist menace,” which justified disrupting the civil rights movement and the anti-Vietnam War movement, and murdering people like Black Panthers Fred Hampton and Mark Clark.

Along with ordering the closure of the Guantanamo Bay prison and secret CIA prisons and ordering an end to the use of torture in interrogations, Obama began his presidency by calling for much greater transparency. In reality, his administration did nothing to curtail or even talk about the surveillance monster that he took over from George W. Bush.

The tepid reforms proposed by the review panel, completely tied to the interests of the national security state, were further diluted by Obama in his Jan. 17 speech that grandiosely compared today’s surveillance to Paul Revere, equating counter-revolution to revolution. He did not even commit to the most touted measure: to stop the NSA’s collection of telephony metadata. The report did admit “that the information contributed to terrorist investigations by the use of section 215 telephony metadata was not essential to preventing attacks and could readily have been obtained” in other ways.

However, the collection would not be stopped but turned over to the phone companies or a private consortium. As if private capitalists are more trustworthy to spy on us! From Facebook to little-known web tracking and advertising companies, corporations are already accumulating vast loads of data about consumers, employees and critics. The state can access those terabytes both “legally”–with a search warrant, an FBI letter, or sometimes an informal request–and illegally, as in the PRISM program revealed in leaked documents boasting about secretly tapping internal data streams of Apple, Yahoo, Google, Facebook and several other companies. This revelation provoked tech companies to call for reforms–because it threatens their profits.

THE USES OF SURVEILLANCE

Surveillance is not an end in itself. It is used to control people, to intimidate, to locate and stifle opposition. Each intelligence agency has close links to the military; the NSA head is always a general or admiral. Some agencies, like the CIA, have their own paramilitary branches, even their own killer drones.

The super-secret Joint Special Operations Command (JSOC) runs its own drones, airplanes, space unit, surveillance technology and secret prisons. JSOC reports directly to the president, not to Congress or the regular military hierarchy. With a secret budget, it operates in 70 countries, fighting covert battles and carrying out death squad missions. Its only operation to have been revealed is the assassination of Osama bin Laden, a figure so deservedly hated that his assassins have been lionized by everyone from Fox News to Jon Stewart of The Daily Show to socialist Senator Bernie Sanders.

In the mid-1970s, revelations of CIA involvement in assassination plots drew such outrage that first President Ford, then Carter, then Reagan issued orders banning direct or indirect government involvement in assassinations. Not 30 years later, the hysteria after the Sept. 11, 2001, attacks enabled the Bush administration to make targeted killings a centerpiece of its “global war on terror,” supposedly authorized by Congress’s September 2001 declaration of war with the whole world as a perpetual battleground.

Now JSOC, the CIA and the Pentagon each have their own kill list. Drones are used in most of the killings, such as those in Yemen in 2011 of U.S. citizens Samir Khan, Anwar al-Awlaki and, later, 16-year-old Abdulrahman al-Awlaki; and, again in Yemen, the December 2013 killing of 15 members of a wedding party. A study by Stanford and New York Universities concluded that only 2% of the over 4,700 people murdered in drone strikes are known terrorists. Partly this is due to the documented–but not acknowledged–practice of executing a second strike when rescuers arrive to retrieve the dead and wounded.

The surveillance, the secrecy, the militarization together impact the war at home, as can be seen from the intensive surveillance systems being implemented by the police in cities like Chicago, New York, Baltimore and Oakland. Chicago and San Diego police are using facial recognition systems, as are the FBI and Border Patrol. NYPD officers have been prosecuted for abusing the FBI-operated National Crime Information Center database to “snoop on co-workers, tip off drug dealers, stage robberies and–most notoriously–scheme to abduct, [kill] and eat women.” [1]

Reporting on the citywide surveillance system being built in Oakland, the East Bay Express found that internal discussions by police officials and other city staff did not take up crime, the purported reason for the system, but did discuss ways to spy on labor actions and political protests. It has already been used to monitor demonstrators, longshore workers, truckers and Occupy Oakland. [2] Oakland plans to analyze video feeds from public transit, public housing, public schools and libraries as well as traffic cameras. Blacks and Latinos can expect to be under the most comprehensive surveillance.

We need only remember how monitoring and infiltration went hand in hand with the nationally coordinated effort to crush the Occupy Movement in November 2011, with involvement by the Department of Homeland Security and local Joint Terrorism Task Forces. (See “Occupy defies attacks,” Jan.-Feb. 2012 N&L.) This had nothing to do with Al Qaeda and everything to do with the rulers’ fear of revolution in the shadow of Arab Spring, the Wisconsin protests, revolts and occupations in Europe, prisoners’ strikes in Georgia and California, and Occupy, culminating in Oakland’s general strike.

Since the surveillance and repression are in the service of preserving the capitalist order, it makes no sense to try to oppose them by allying with pro-capitalist “libertarians” like Rand Paul or Freedomworks, one of the main sponsors of last October’s “Stop Watching Us” rally. These are the same people cheerleading the crushing of Occupy and destruction of labor unions, and opposing any regulations on business. If they took state power, there is no doubt that the guns would be aimed at workers and people of color.

Unfortunately, Snowden and his ally Glenn Greenwald are drawn to libertarianism and the racist and sexist Ron and Rand Paul, as are a segment of the Left. Similarly, the new Wikileaks Party in Australia flirted with the far-Right anti-immigrant Australia First Party and sent a “solidarity delegation” to Syrian dictator Bashar al-Assad. This kind of alliance is a symptom of partial opposition to the state’s invasion of privacy, falling short of recognizing the need to uproot the class basis of the state, which functions to keep workers under the thumb of capitalist exploitation.

Suppression of revolt has always been key to the mission of “law enforcement,” whether we roll history back to the slave patrols that could stop and question any African American on or off the plantation in Southern states, or to the origins of the FBI in the 1919-20 Palmer raids that targeted working people and Blacks in the wake of the 1919 Seattle general strike and the rise of the Garvey movement.

All of the 1960s mass movements–civil rights, anti-war, student free speech and women’s liberation–were subject to illegal surveillance and arrest by the FBI working with local police, and to infiltration, blackmail and disruption. FBI informants were involved in some of the most heinous crimes, such as the vicious 1961 assault on the Freedom Riders in Birmingham, Ala. The mushrooming prison system beginning in the 1970s is not separate from this repression.

The reforms enacted to rein in the FBI, CIA and police abuses revealed after Watergate were gutted after Al Qaeda’s Sept. 11, 2001, attacks. Some were rolled back by Congress or courts but in many cases the Bush administration simply violated the law and the Constitution. In their oversight capacity, Congress changed the law to allow some practices, while FISC judges made secret rulings blessing others as constitutional. The Obama administration has continued many of those violations, including the massive surveillance.

Despite distancing itself from torture as a means of interrogation (or, rather, outsourcing it to other countries), the administration has blocked any prosecution of the officials responsible for torture and its cover-up. In contrast, it has gone after whistleblowers with a vengeance. During Obama’s presidency, more people have been prosecuted under the Espionage Act for leaking classified information than in all previous U.S. history. Chelsea (formerly Bradley) Manning, source of the 2010 Wikileaks revelations on the Iraq and Afghanistan wars and more, was sentenced to 35 years in prison last year.

The ever-growing top-secret militarized surveillance state, the continuity between the Bush and Obama administrations, the complicity of the legislative and judicial branches, are not “abuses” but rather the natural outgrowth of capitalism in deep crisis. The machinery of counter-revolution grows in reaction to the specter of revolution, forming the apparatus ready-made for a new, high-tech fascism. Nothing less than a revolutionary uprooting of their capitalist basis can abolish these threats to freedom.