“Historic initiative of the masses and Lenin’s philosophic break” (Raya Dunayevskaya, Nov.-Dec. 2017 N&L) says to me that the breakdown of the socialist movement made Lenin turn to Hegel’s dialectic, making him see ideas and movement of thought, dialectic, as part of revolution. Hegel’s principle of self-movement, taken in human terms, is what is needed to understand what’s going on subjectively and objectively, and to transform it into liberation.

As we contend with Trumpism’s degeneracy, we find meaning and direction in Russia: from Proletarian 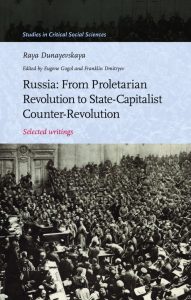 Revolution to State-Capitalist Counter-Revolution. Dunayevskaya’s writings let us see the Russian masses “storming the heavens,” and Lenin’s philosophic breakthrough that led him to slogans like “all power to the soviets!” and “party work to be checked by non-party masses.” Equally important, we see the contradictory forces: “a passion for bossing” and the failure of the revolution to spread worldwide that transformed that magnificent revolution into a state-capitalist monstrosity.

Revolutionaries today need to grasp both the greatness of the revolution and the abysmal disaster that it became. The writings that show how the Russian Revolution influenced the birth and development of Marxist-Humanism can help us to learn how to overcome retrogression and sustain freedom and humanity.

Celebrating the 1917 Russian Revolution means, above all, to go back critically to that historic event in order to “provide us with a needed vantage point to confront our own contradictory, unfree world.” Lenin didn’t “make” the revolution. The Russian masses did. However, Lenin’s philosophical preparation for 1917—his trip back to the philosophical ground of Marxism: dialectics—did provide the Bolshevik party with a vantage point that, in conjunction with the spontaneous activity of the masses, made possible the October Revolution. Can we learn something about this needed unity of theory and practice, philosophy and revolution, masses and small groups (parties) of thinker-activists, in order to face the contradictory reality of our own world?

My engagement with the philosophy of Marxist-Humanism has been of tremendous importance. No other philosophy speaks to how we become more human by expanding on the way we express our humanism to each other on a daily basis. At the root of the human relationship is the dialectic process in thought and activity, which N&L brings to the forefront for readers to comprehend because thought defines and guides our human social relations. As a revolutionary newspaper, N&L has set itself apart from other papers that have failed to fully grasp the significance of Karl Marx’s Marxism. N&L is a true necessity for those of us who love the idea of freedom and march willingly to work toward the establishing of real freedom in the world.