I admire Terry Moon’s bravery in writing about these events (“#MeToo,” Nov.-Dec. 2017 N&L). Sexual harassment and abuse do occur at the same time that aggressors view those they try to victimize as less than human. So a true revolution will need to directly and sharply confront and transform this social attitude.

A lot of what is coming out in the #MeToo movement happened long before Trump ran for office and that underscores how electoral politics won’t get us out of this and how fundamental a change is needed; just as the abuses that go on within families show how deep and total a change is needed.

Dunayevskaya had the concept that the Absolute Idea does not mean you thinking and that applies to Marx. Why did Marx single out the Man/Woman Question? Could Marx tell you why his ideas developed the way they did and stand outside of himself and say this is me thinking? These ideas had their own compulsion. #MeToo is people speaking for themselves, breaking their own chains. Marx wrote of the Third World based on reports from colonialists. By the time Dunayevskaya wrote, she got it from Frantz Fanon, activists in the Cameroon, villagers she met in West Africa. That made it different because you are hearing people speak for themselves. 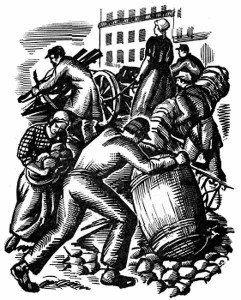 Paris Communards on the barricades.

The Women’s March brought to mind the milkmaids beginning the 1871 Paris Commune and how the women workers in St. Petersburg started the February 1917 Revolution in Russia by having an International Women’s Day march over the objections of the Bolsheviks and the rest of the Left. The rising tide of resistance led by women has borne fruit, such as the #MeToo movement. The idea that women are “finally” speaking out means they are finally being heard. Alyssa Milano was speaking out for her TV sister Rose McGowan, saying that Harvey Weinstein had raped her, but no one was hearing. If this is happening to an established actor, it tells you about what happens to women in less powerful positions.

Think of the price Emmett Till paid for approaching a white woman, and yet so many in the South are indifferent to 14- and 16-year-olds being raped and harassed by Roy Moore. They let it pass so he could have a vote to hold back Black empowerment.

The #MeToo movement has taken off in France under the name of “#balancetonporc,” literally, “turn in your pig.” The English translation includes a pun: “squeal on your pig”! There is also some controversy over language; in France the Académie has rejected the new practice of putting names of professions in such a way that they do not reflect “default to the masculine.” In Québec this has been standard practice for 30 years. The #MeToo movement has had big political repercussions in Québec, especially Montréal, where Projet Montréal candidate Valerie Plante defeated Denis Coderre by 5% points and is now Mayor. Projet Montréal is essentially social-democratic, but does give some space to breathe. An entertainment tycoon named Gilbert Rozon, who was close to Coderre, was outed for sexual harassment a couple of weeks before the election, and the outcry was strong.

NPR and the BBC news were talking about New York banning books for prisoners. Anything that is about empowerment or self-reliance, etc., becomes a threat to modern corrections, which is solely based on the new plantation mentality revolving around warehousing people for the sake of financial rewards gleaned by the prison industrial complex. But now more young people are starting to see beyond the lies about mass incarceration. When my stepdaughter graduated college, she wore a variety of braids, a medallion and sash that signified her commitment to multiculturalism, women’s issues and ending the abuses of the U.S. injustice system, especially when it comes to the prison industrial complex.

Here at High Desert State Prison, an effort towards rehabilitation has been started through self-help groups, think tanks and progressive assemblies within these cages. The warden as well as many of the keepers, who seek to see men exit this environment with the tools needed to avoid returning, support this. However, a group of keepers completely oppose this constructive effort. They have recruited some inmates as agents of disruption, causing chaos, attacking individuals involved. It’s a challenge producing honorable citizens who are expecting to return to society with these types of keepers disrupting progress. Could you mention this in your publication to shine an outside light on the situation?

The ideas I have about N&L are the same as every other person that receives it. Everyone I see struggling in my area is fighting for the same thing as me and as everyone in N&L is: freedom.

I love the paper. I always look forward to the next one. As a Transgender woman, women’s rights are very important to me and I like to read about the activities that are going on outside of prison.

I love everything about your paper and would very much like to continue getting it. Thank you very much. I will donate when I can.

I am what most call a “jailhouse lawyer,” though I hate the term myself. I have been receiving N&L for about six months and I love reading the paper. It has led to my own personal study of the Marxist-Humanist agenda, which I became a huge supporter of. If in the future I do win one of my lawsuits or my financial condition changes for the better I will gladly cover the cost of my own subscription and make a donation to your wonderful organization. Your publication means a lot to a lot more people than you could ever know.

I think this paper is awesome. It educates, informs and enlightens me and everybody else who reads it. I share your paper with several other people in this pod. It helps me to change my mind on world views. Me, and a couple of other guys, are fixing to meet to discuss world issues and political reform. And we’re going to discuss certain articles inside this newspaper.

I really very much would like to enjoy continuing to get your News & Letters. It gives us some education on things we don’t hear about anywhere else. I pass around your paper to other inmates and they enjoy reading it as much as myself.

TO OUR READERS: Can you donate $5 for a prisoner who cannot pay for a subscription to N&L? It will be shared with many others. A donation of $8 pays for a subscription plus the Pelican Bay Hunger Strikers pamphlet to be sent to a prisoner. Prisoners are eligible to continue their free subscriptions when they first get released, a time when the system tries to make them forget the struggle.  To donate click here.