RISING THREAT OF THE RIGHT

Gerry Emmett’s article, “European Union elections: mixed signals” (May-June N&L), is a timely reminder of the dangers inherent in a decaying capitalist civilization. Just as across Europe, the far right is making headway here in the UK, as can be seen by the Brexit vote and the ongoing Islamophobic rhetoric which is spouted on an almost daily basis. It seems that most of the British Left is caught in supporting Brexit with all the reactionary consequences. There can be no Lexit.

The aid workers in Arizona who left food and water for refugee immigrants in the Arizona desert were convicted. The next one faces 20 years! We are living under fascism, which means that Nazis could march—with a police escort—right next to Detroit’s Gay Pride Parade. After all, don’t they have freedom of speech? No one knows yet if they had a permit, which the Gay Pride Parade was required to have.

When I heard that Nazis had showed up to taunt the Pride Parade in Detroit, it brought back memories from 40 years ago when these same Nazis, National Socialist Movement, opened a headquarters/bookstore in Southwest Detroit. Daily mass picketing initiated by News and Letters Committees and including leftists, Holocaust survivors and local community groups shut it down, and then shut down NSM when they moved to two other working-class racially mixed neighborhoods. Yet Detroiters still have to block NSM today.

CORRUPTION OF THE CRIMINAL INJUSTICE SYSTEM

There is a lot of wrongdoing that is up for debate, but I know personally that the DA offices of Los Angeles County are corrupt (see “Jackie Lacey, Los Angeles DA, must go!” Nov.-Dec. 2018 N&L), starting with Pomona, then Glendale and Burbank. I have been locked up for telling the truth and their policy is to keep it quiet. Please know that witnesses change their story, and names of people that are plaintiffs are changed. In my case I can speak on that. 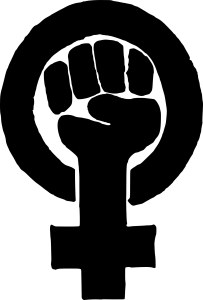 Indiana’s fetal burial law that the U.S. Supreme Court just approved requires that fetal remains from an abortion be buried or cremated by the clinic or doctor providing the abortion. The spinners, even liberal ones, are saying that has little to do with abortion but it has everything to do with limiting abortion rights and influencing the way the public thinks about abortion, fertilized eggs and fetuses. It has everything to do with shaming women and imposing the state’s beliefs onto each woman who has an abortion. It is, essentially, a “personhood” law, that is, it recognizes a dead egg, a few cells or fetus as a human being that must be buried or cremated. What about the woman’s dignity? What about her beliefs?

The Hyde Amendment is the only legislation I can think of that lets people determine what they want their taxes to pay for or not. I didn’t want mine to pay for Trump’s inaugural bash, his upcoming usurpation of the 4th of July celebration in Washington, D.C., or his relatives’ completely unnecessary trip with him to Britain. I have no choice. But somehow people feel justified in saying they don’t want their money to pay for a poor woman’s abortion, often resulting in a forced pregnancy that, at worst can threaten a woman’s life, and at “best” force—yes force—her to have a baby she does not want. Down with the Hyde Amendment!

Maâti Monjib, publisher of the Arabic edition of Raya Dunayevskaya’s Marxism and Freedom (available for free on our website, click here), is under attack by the Moroccan state again! On April 22, Monjib went on a 48-hour hunger strike. He is threatened with dismissal from his post at Mohammed V University in Rabat, Morocco, and from the civil service. Four years earlier, Monjib led a 24-day hunger strike to defend his freedom of movement because the government banned him from traveling. He was prosecuted along with six other people for “threatening the internal security of the State.” The trial is ongoing and he is the subject of incessant state press campaigns of defamation and moral harassment in his workplace. To support Monjib, go to https://secure.avaaz.org/fr/community_petitions/Mounia_Bennani-Chra_Des_universitaire_sinquietent_face_aux_entraves_a_la_liberte_academique_subie_par_Monjib/.

Sadly, capitalism has generated a homophobic, racist, ageist society that has created a nursing home “industry.” (And I bet you thought an “industry” was a system of producing things, not places to care for those who need assistance!) The culture Suzanne Rose describes in “Nursing home blues” (May-June N&L) underlies even facilities serving middle-class residents with constant family visits. Nevertheless, the “lowest-level” (read: lowest-paid, hardest-worked) staff is most likely to provide kindness and human interaction with nursing home residents, despite the generally anti-human, poisoned atmosphere.

N&L is real and very diverse in your reporting. I particularly dig the coverage of that racist pig of a president, Donald J. Trump. If the people don’t come out in droves to oust him in 2020 then the country deserves this chump. Honestly, the Democrats are just as corrupt as the Republicans, just as greedy and capitalistic to the core. As a true revolutionary, I believe in the total overthrow of the U.S. government and believe that the Constitution, drafted by racist-rapist slave owners, should be dismantled and replaced with one that truly serves and benefits the people. One where education and medical services are accessible to everyone regardless of race, sex, class and national origin.

N&L has a lot of good info and what goes on in the world are things that the other papers don’t tell you about. Where I’m at, I don’t get to see a lot of news. I have been in ad-seg for almost five years now and I’m about the struggle. I would love to help get this kind of living out of the way. The things that go on in Missouri are out of control. I just love knowing that there is someone else fighting the struggle with me in this world. I try to share N&L with a lot of people, but some just don’t want to hear the truth about what goes on in the world. But I love the truth and I want to be a part of it. 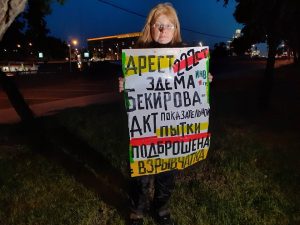 Demonstration in Moscow for Eden Bekirova.

When we started monthly pickets in support of the Crimean Tatars in 2016, there were searches, arrests, murders, disappearances. Now there is another wave of repression against the indigenous people of Crimea. Families have been taken. In June, eight Crimean Tatars were arrested in the case of hizb ut-Tahrir [a party legal before Russia seized Crimea], adding to 58 others. Their persecution is politically motivated. Our June 18 picket called attention to the Crimean Tatar political prisoner Eden Bekirova, who was kidnapped before having heart surgery. Crimean Tatars who collect money for the families of political prisoners are persecuted, as are relatives who go to court to see their loved ones.

Saturday, July 27: Critical Reflections on Capitalist China
7:00 PM at Fine Arts Building, 410 S. Michigan, Studio 632B
Talk by Richard Gilman-Opalsky. Sponsored by News and Letters Committees, the Anti-War Committees in Solidarity with the Struggles for Self-Determination,
and Repeater Books.

← Readers’ Views, July-August 2019: Part 2
Essay: What is socialism? Socialism and Women’s Liberation →
This work is licensed under a Creative Commons Attribution-ShareAlike 4.0 International License