How important Indigenous struggles are to the current moment of unrest (see “Australia’s Megafires Lay Bare Capitalism’s Climate Death March,” Jan.-Feb. 2020 N&L) is starkly shown by the Canadian nationwide revolt in support of the Wet’suwet’en. When heavily armed Royal Canadian Mounted Police attacked the Unist’ot’en resistance camp, blockades and protests spread from Victoria to Halifax, shutting down train traffic. The camp is blocking construction of pipelines that would carry tar sands oil and fracked gas, adding to Canada’s contribution to the climate emergency. Prime Minister Justin Trudeau claims the cops are “upholding the rule of law,” but ignores the massive violations of First Nations laws that are supposedly part of the law of the land.

The raging fires and now floods in Australia and the new coronavirus are examples of the many problems facing the entire human race with such danger that our only hope of survival is to end the many warlike rivalries between nations. These conflicts—like the U.S. trade war with China and our resumption of the nuclear arms race with Russia—are simply a waste of our collective energies and are making it impossible to act decisively to solve the growing world crises like climate change, water shortages, overpopulation and the outbreaks of deadly diseases like Ebola, AIDS and the coronavirus that threaten us all. It is so important that all people see that only by acting in unity and cooperation with each other is there any hope of saving our threatened planet from becoming a death trap for the entire human race. There has never been a time in the past when love and respect for each other was so important as it is right now! I am sending $10 to renew my subscription for two more years. I’m including $5 more to support your compassionate and deeply needed prisoner support program.

I absolutely love N&L! It is awesome how there is more revealing news in such a small publication than you find in status quo newspapers, national news, or even on TV. My daughter currently lives in Australia. I never hear squat on regular news and did not know that 250,000-plus people were evacuated over there and other nightmare disasters. Thank you! Jeff Bezos, the billionaire head of amazon.com, pledged to give away $10 billion (without which he would still be the richest person in the world by far) to fund “ways of fighting the devastating impact of climate change.” One of the main reasons he made that pledge is surely the pressure he is getting from amazon.com employees, who point out the company’s role in the march toward total destruction (“Google and Amazon Workers Rebel,” Jan.-Feb. 2020 N&L). They have already pointed out the hypocrisy of pledging this fantastic sum while refusing to take their advice to stop helping fossil fuel companies extract every last drop of oil. One of the signs Bezos must see as most dangerous is the growing cooperation between white-collar workers in Amazon Employees for Climate Justice and warehouse workers trying to organize. The warehouse workers are asking why Bezos can drop $10 billion and not find enough money to lift their wages out of poverty, reduce their deadly and crippling speedup, and implement health and safety measures in warehouses. When workers organize, the bosses try to take over their issues—exactly the way the Saudi ruler eases restrictions on women and simultaneously imposes harsh prison terms on the women who rebelled by driving.

The Warren Tech Center of General Motors used to employ 16,500; now it is down to 3,300. (See “GM Strikers Fight Capital’s Drive to Impoverish Workers,” Nov.-Dec. 2019 N&L.) General Motors announced it was paying smaller bonuses to temporary workers, who already are paid only half of what “permanent” workers earn. Every large enterprise divides workers.

The presidential state of the union address was the most unbelievable display of the patronization of Black people that I have seen in a long while. Trump will talk about how well it was received and that it was the best state of the union address ever, since he is a legend in his own mind. What was disturbing is how clueless the dude really is, promoting a 100-year-old icon of Black success with the promotion to a Brigadier General of a Tuskegee airman who was also recognized at the Super Bowl on Sunday, and then recognizing one of the most xenophobic, misogynistic representatives of racist rhetoric in the country, Rush Limbaugh, and giving one of the most divisive entities in this country the Presidential Medal of Freedom. One of the ironies is that he even has disdain for that award. Until today, only the president has hung that award around a recipient’s neck; never a first lady and never in such a forum. The most interesting response was Nancy Pelosi ripping up her copy of his speech. The best part of the evening in my mind was the thoughtful Democratic response by Michigan’s Governor.

Important points, but by no means limited to Republican policies, are that the contradictions in electoral politics USA have seriously sharpened in the past decade, with increased cyber vulnerability and at the same time increased cyber accessibility. Voter suppression is also partly indirect, by flawed technology and subpar procedures as in Detroit (run by Black Democrats) in 2016. Then a recount was stopped by party leaders after only two days. Nevertheless, 60% of the ballots were “uncountable.” The very real foreign attacks by Russia take the spotlight off the equal ability of the U.S. to mess up our own elections, deliberately or by uncaring and incompetence. Though there is youth cynicism, “all politicians are bad,” there is also youth activity against gun violence and climate change. There are many fighting for women’s freedoms and expressing enthusiasm for Bernie Sanders. So youth are also seeking far-reaching change. Electoral democracy will not alone make a revolution, but what can the desire for it mean in the struggle for REAL human freedom?

In his presidential bid Bernie Sanders is proposing the decommodification of an entire industry, the bloodsucking health insurance industry. Many in my generation are drawn to his campaign because they’ve given up on the idea that capitalism can be trusted to serve human needs. The Bernie coalition is multiracial, largely young, and often speaks in terms of Martin Luther King, Jr.’s, synthesis of racial justice combined with the anti-capitalism he was developing especially later in his life. It’s easy to see the limitations of movements when they’re related to electoral politics but I prefer to get excited about the radical tendencies emerging.

It was exhilarating to read about the demonstrations across India against the apartheid-like anti-Muslim CAA law that Gerry Emmett enumerated in “Mass Protest Challenges India’s Modi” (Jan.-Feb. 2020 N&L). They forced Modi to pay attention, but he has responded by doubling down. He used Trump’s visit to India, and Trump’s approval and praise, to instigate Hindu riots targeting mosques and Muslims and their homes and businesses. By the end of February, reports of police shooting at crowds of Muslims while protecting Hindu rioters, and even standing down while they burn down mosques and Muslim-owned shops, not just in rural areas but even in Delhi, have become too common. When the Nazis killed Jews and pillaged their businesses in Germany in November 1938, they called it Kristallnacht to mark the broken plate glass of Jewish shop windows. This just adds to the urgency that the fervor of mass protest against Modi’s designs for a Hindu-only nationalist autocracy actually help spur his overthrow. 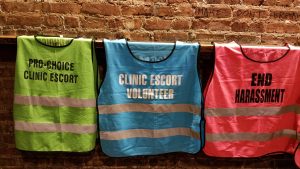 For decades the U.S. government refused to recognize those who burn and bomb abortion clinics, or murder doctors and healthcare workers who work in those clinics, as domestic terrorists—although they fit the definition perfectly. Now, since the fanatics have invaded the White House, FBI Director Christopher Wray wants to create a category, “abortion violent terrorism,” but it will include “people on either side of that issue who commit violence…” But there is no terrorism from those who support abortion rights. This is an attempt to criminalize clinic escorts, the people who try to protect women walking into clinics from the fanatics who scream, block and throw things at women walking into healthcare clinics. Anti-abortion Trump et al have already tried to paint doctors as murderers who rip babies ready to be born from the womb and kill them. The lie within this new “terminology,” is a boon to anti-abortion terrorists.

So historic was the first Women’s March in 2017 that even the National Archives and the Library of Congress felt the need to rewrite history to mollify Donald Trump. The National Archives gave an incredibly stupid reason for rubbing out the signs women held that criticized Trump, in its exhibit on the history of women’s suffrage in the U.S. They claimed that because they are “a nonpartisan, nonpolitical federal agency,” they scrubbed the photo of the historic D.C. Women’s March “so as not to engage in current political controversy.” But the March was exactly a statement on current political controversy. It was, at its core, a massive demonstration to protest Trump’s racist, sexist, anti-immigrant, anti-LGBTQ agenda. The Library of Congress was just as bad, refusing to exhibit a mural-size photo of the 2017 March precisely because it was critical of Trump in its commemoration of U.S. women’s decades-long struggle for the vote. Did they think that in that long fight women weren’t critical of the presidents of their day? Give me a break.

Regarding “Anti-Femicide Goes Global” (Jan.-Feb. 2020 N&L), I work in the field of violence against women. Sometimes I am told that women from other cultures accept it, but I have only once heard that from a woman from another culture. I have worked with women from all over the world, from many cultures, who all want to be respected—both at home and outside the home. Men who have gotten in trouble with the law have said, “You do not understand our culture, and you are trying to impose a Western culture.” However, when I tell them I have worked with women from their culture, they usually go silent. One of the big reasons women in India are marching is that the police do nothing about violence toward women. Women all over the world are marching. Women are tired of hearing from men that we protest because we are not getting attention, or are ugly. Women are chanting “The Rapist in Your Path” worldwide. It is a very exciting article.

← Free Lyris Wolfe!
March-April 2020 issue online; and a note on the pandemic →
This work is licensed under a Creative Commons Attribution-ShareAlike 4.0 International License