THE DIALECTIC IN THOUGHT AND IN LIBERATION

Supporters of capitalism argue that Marx’s economic theories only revealed the condition of the 19th century. But over and over they have to come back to him since he was not just an economist. Marx’s rootedness in Hegel and Hegel’s analysis of 2,500 years of humanity’s logic makes it impossible to “neglect” him. Marx formulated that the human being not only is the Object of history but its Subject. Meaning that it is the Subject, the worker, that makes history despite all the apparatus of the capitalists who try to diminish him. At every crisis, thinkers return to Marx’s analysis of the inherent contradiction of capitalism, the diminishing rate of profit. Labor cannot be neglected, and neither can Karl Marx.

Raya Dunayevskaya’s moving “African Revolutions at the Crossroads” (March-April 2020 N&L) brings out the depth of the African revolutions, and the contradictions present from the beginning. She consistently showed that “Africa was charged with a dynamism of ideas that opened new paths to revolution and looked for new roads to development.” The leaders’ lack of a philosophy of revolution in permanence and separation from the masses blocked those new roads. Capitalist “development” exploiting labor and nature brought some industrialization and riches to elite minorities, and devastation to masses—especially in the slums where 60% of urbanized Africans dwell and in the parts of the countryside where farming is disrupted by drought, storms, floods, locusts, and land grabs by foreign capital—but also discontent and revolt seen today.

I like your international reporting and of course the letters section. If there was any easy resource to digest Hegel’s ideas in relation to contemporary Marxism/world events, what would you recommend?

Editor’s note: While good writings about Hegel are not easy, check out our online bookstore, in particular the book Philosophy and Revolution.

It’s always the low-income people that are most susceptible. So why aren’t we being tested, why aren’t we getting food, why is nobody coming here? Why not test everybody? I believe it will get worse. There are lots and lots of homeless people, with nowhere to sleep and signs that say “Do not support panhandling.” Why don’t the pastors do anything? You see the people lying on the street. I grew up on a plantation in Mississippi, so I know what it’s like to have racist white people taking everything away from you. There are not enough masks even for the nurses and doctors. They had the nerve to call all the retired nurses to see if they would work. I said no, I don’t want to work again. I don’t want to go anyplace where everyone has not been tested. 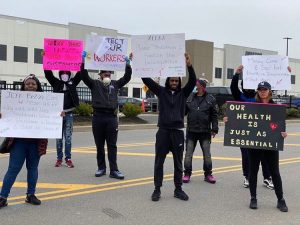 What gets me is companies like Uber and Lyft have made billions off the “gig” economy or what we called piece rate. The workers took all the risks and the owners made all the profit. Time to shove all the risk on their billionaire owners and the profit to the workers. Amazon without warehouse workers would fold, same for all the delivery and livery drivers for other companies.

How many years has the nursing home industry avoided minimum staffing levels? There was never a prevailing wage for nursing home workers. There have never been staffing ratios to protect elders. The nursing homes have become killing fields by the virus.

The parking lot visible from my apartment has only a few cars. The main street has few cars going by. Freeways are almost empty. A lot of people have no income now. This must also be in Europe and other places around the world. A real global crisis, and what do people do with no income?

We hear about going back to normal, but normal is what got us here. Revolution has to do away with separation of mental and manual work. The coffee place near me has cut labor time by about 40%. It won’t be sufficient to send $3,000 to a family of four. It’s not going to even last a month. Unemployment compensation isn’t going to cover rent here. In families with this virus, who is going to take care of the children at home? If one parent stays home, what happens to the salary that’s gone? More than half of families don’t have $1,000 for an emergency fund. You see a lot of college students going to food banks. To me there’s only one reason: workers are not paid enough in this country.

From the fires in California to the fires in Australia, to this disease, everything is reaching a tipping point. These things had been predicted by people the capitalists and fundamentalists did not want to listen to. These things were predicted but laughed out of the room or suppressed. If we could fulfill the sense of ourselves and who we are in this world, we could work together against the crisis in public health, capitalism, and ethnocentrism.

There is no way not to close schools during this pandemic, if social distancing is to be effective in slowing the spread of the coronavirus. But what has opened, exponentially wider than before, is the “educational divide.” In Detroit we are seeing much more than a digital divide. Those with internet access (estimated at half the school population) are receiving instruction if their technology was up to it and they could overcome the glitches. This reveals a two-fold problem: an unacceptable lack of technology that will at best take years to correct and a short-term failure to meet the children’s needs with good old-fashioned paper and pencil. At this difficult time, what could be more important than providing lessons about the huge changes in the children’s worlds? At the very least, keep the learning going from where they left off in mid-March.

PANDEMIC AND THE RIGHT

The “reopen the country” demonstrations: Republican donor groups, Trump campaign organizers, NRA supporters, anti-vaxxers. Hardly a working-class uprising! More worrying than the astro-turfing (using elements of the working class to lend a faux legitimacy to an elite-led action) is the way this lines up behind Trump’s attempt to assume power over the states that the Constitution simply does not give him—and which he previously admitted he does not hold. What does it mean for the road ahead when the national leader who defines his power as “total” whips up angry, gun-toting crowds to protest the limits of his power? This is the price Democrats pay for slagging off the “white working class” as Trump’s support base. In reality, the white working class is politically divided, and much of Trump’s support base is small business capitalists and the corporate CEOs that actually drive the agendas of both parties. 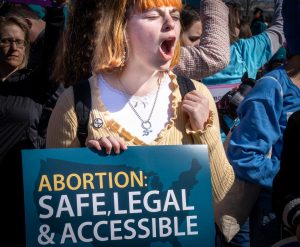 It’s interesting in a disgusting way that some of the same people who claim to be “pro-life” are insisting that it is just fine and their “right” to hold church meetings or services with no social distancing, thus making them carriers of COVID-19 able—and evidently willing—to infect other people and perhaps cause their death. Some of these supposed “pro-lifers” also congregate outside abortion clinics, scream at patients, stick their heads, leaflets and other paraphernalia into people’s cars, thus possibly infecting them with the potentially deadly coronavirus. This is not pro-life, it is fanaticism that reveals a reckless disregard for life.

Regarding the statistics that show that COVID-19 is hitting poor people and people of color harder, yes. It is also hitting women harder, especially women of color, even among the middle class. Women are going to have the highest rates because they are the ones taking care of everyone else—CNAs and social service providers, child and elder-care providers, caregivers for disabled people. And who do you see working in your grocery store? Then there are the nurses, teachers (when school resumes) and social workers—middle class women. Do we really want to go back to the way it was before this pandemic? I say no!

Terry Moon’s lead on “Women’s movements reach for new global stage” (March-April 2020 N&L) was excellent. The women-led social justice movements taking place around the world—from the U.S. to India, Brazil and Iraq—deserve more coverage. Thanks, Terry Moon, for enlightening us.

I love this article by Ms. Moon! Her respect for those who are struggling for freedom and her ability to hear it without shying away from contradictions is pretty amazing. I know where it comes from: her philosophy. And that is what she says and writes, and how she see things is true. I’m convinced. For now, I feel it and know it and I’m sharing it on social media!

N&L is absolutely essential. Now that Under Lock and Key has gone under, there are fewer publications that pay attention to prisoners. Thank you once again for printing part of my piece on slave labor at UNICOR (Sept.Oct. 2019 N&L; see also “Prison Slave Labor,” March-April 2020). A couple of days ago, the first person I know on the outside was able to find it on newsandletters.org. Since last I wrote, my friend and fellow prisoner Bill Hewlitt showed me some rather compelling evidence that UNICOR caused his COPD, which is expected to kill him somewhere between a few months to three years from his diagnosis. Alas, he was shipped before I was able to obtain copies of his records.

I have been a humanist since my early teens (I’m 35) and a Marxist for only the past few years, but I try to do my part. Your newspaper gives my life hope and meaning. I really appreciate what your organization does for people like myself. Thank you so much for throwing me a “lifeline,” as the saying goes.

“Free Lyris Wolfe!” by Urszula Wislanka (March-April 2020) reminded me of how common this type of situation is. Prisons and jails are a very profitable multi-billion-dollar industry. I can’t tell you how many times I have heard this same story of proof of innocence. But the prosecutors prosecute anyway. There are no consequences for this kind of outrageous government misconduct. I know because I myself am innocent and yet I got life without parole. Lyris Wolfe is lucky that she had such a large support group to bear witness to the prosecutors’ greed or else she may have been convicted like so many of us who didn’t have friends or family that were so supportive. I wish mainstream media would tell stories like this. The truth is Lyris Wolfe’s story, my story, countless others: human suffering for sale.

People are flooded with information, much of which is questionable. It has always been a breath of fresh air to read N&L and get information about world events that is accurate and which pertains to the masses, unshackled by the need to appease corporate sponsors and advertisers. It is for this reason that I decided to participate in News and Letters Committees. Of the many things that I always appreciate, there is a level of belonging regardless of class, social setting, race or gender.

Well, after almost 10 years locked up, my release is only 12 days away! Thank you so much for your paper and support and information through the years. I would like to continue to receive your paper, and have updated my address. I am supposed to have a job waiting out there—with all the lockdown orders, hopefully it’s still there. I will be sending funds to allow you to give another inmate subscription like I have been blessed to receive. Thank you again.

← Canada on trial: War on Wet’suwet’en nation
COVID-19 among South African shackdwellers →
This work is licensed under a Creative Commons Attribution-ShareAlike 4.0 International License