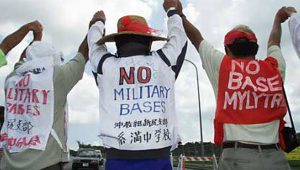 On Oct 13, after weeks of 24-hour protests that interrupted construction and constantly delayed the entrance and exit of U.S. marines to their new base at Henoko, the governor of Okinawa, Japan, Takeshi Onaga, ruled the construction illegal. Onaga routinely finds some technical legal issue to stop construction, and a week or so later Tokyo overrules him. Yet protesters take it as a sign they are having an effect. “If the people’s interest keeps growing, the government will give up,” one insisted. Although the majority of Okinawa politicians and intellectuals quoted in the media express worry that not building a 33rd U.S. military facility on the 875 square mile island would imply bad faith and would put the Japan-U.S. alliance in jeopardy, protesters believe it is important to challenge U.S. power. As military trucks go in and out of Henoko accompanied by Japanese security guards, people on loudspeakers chant “Marines Out of Okinawa” and “Close All Bases.”

Shahrokh Zamani, a founding member of the Paint Workers Union in Tehran, Iran, was an outspoken communist labor activist who fought all his life to better

the conditions of his fellow workers. He was arrested for the first time in 1993 and was targeted often for his activism and imprisoned. He was last arrested in June 2011. In prison he showed good spirits to his prison mates and was supportive. He died in Rajaee Shahr Prison in Karaj, Iran, on Sept. 13, found in his bed with blood in his mouth and a blow to his head. Many believe he was murdered. He was serving an 11-year sentence. He was an inspiration to all involved in the labor struggle and his memorial turned into a protest.

“Counter-revolution in Middle East shows crisis of humanity” (Sept.-Oct. N&L) shows the human forces of liberation in three regions/countries: the Iraqi people, the Kurds in Turkey and the Syrian masses. Practically, the article tells about the coming together of “the Kurdish forces with elements of the Free Syrian Army—an opening for a potential deepening of the revolution on both parts.” But what points to unity not only in practice but in theory is that the three forces are struggling for a world with new human foundations, against religious sectarianism and for human unity and freedom. Their universal aspirations help us understand why the article concludes, “It is not a question of simply judging events by their multiethnic character, important as that is, but of the relation of subjects of revolt to a philosophy needed to overcome the terrible retrogression we see today.” We need to go further on this relation of movements from below with a philosophy of revolution in permanence capable of encompassing them. 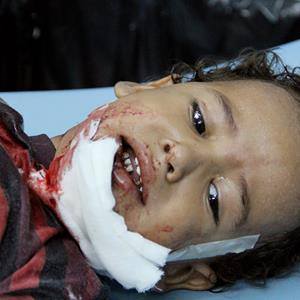 As the bombings intensify in Yemen, dozens of messages have been pouring into my facebook and email: “Tell the world that the situation is unbearable in Yemen, Afrah! The killed ones had mercy from Allah, but we, the living ones, are going through a slow death. Tell the world, Afrah!” Such messages made insomnia my new best friend. It’s really a cruel world. Most of the “world” has been bought by Saudi money; even our president, Hadi, was bought by Saudis’ money. Each missile and each rocket fired at Yemen is done with the blessings of Hadi. How can we, poor activists, journalists and bloggers, face the Saudis’ power/money/dominance/hegemony machine? What ordinary people in Yemen and from Yemen—who are shattered around the world—what they feel most painfully is how it is to be abandoned, not only by the “world,” but also by their own president, Hadi. The Saudis promised to give the UN big money to address the humanitarian plight in Yemen with one condition: that it’s to be distributed in the Saudi-Hadi liberated areas only. Let the rest of the country starve to death! Who can hear Yemenis? Who can hear their outcries? Who can save Yemen? Who?

The situation in Russia is getting worse. The hysteria of propaganda against “external and internal enemies” is escalating, as well as pressure on opposition and civil society in general. All opposition rallies in the center of Moscow are now forbidden; organizers of Boris Nemtsov’s murder are protected by the state (while everybody knows that they are people of Putin’s Chechen vassal Ramzan Kadyrov); the TV continues attacks on all critics of the regime, particularly targeting “The May 6th Committee”—which defends those arrested in big anti-Putin demonstrations—as “traitors and foreign agents,” etc. And now the government has launched a new military intervention—in Syria, where Russian rockets are killing opponents of Assad’s regime and civilians under the pretext of “fighting ISIS.”

But possibilities of activities are not yet totally destroyed. It is still possible to work with Praxis Research and Educational Center, Memorial,  and the Russian Confederation of Labor. Now a book on the history of workers and the trade union movement in Russia will be published soon; seminars on the politics of the labor movement and democratic Left continue. Plans are also underway for a conference in Tbilisi, on the history of the labor movement and Socialism in Georgia. There may also be a symposium devoted to the anniversary of the anti-war Kienthal conference of 1915.

Nov. 20 marks the 17th International Transgender Day of Remembrance (TDOR), to remember people who were murdered or committed suicide since TDOR 2014 for being, or being perceived as, Transgender or gender non-conforming (GNC). Transgender people and their supporters participated in the Philly Trans 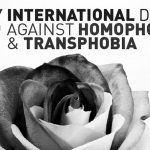 March on Oct. 10. I will attend the event at Chicago’s TGLBQ community space. Transgender people continue, too slowly, to gain rights. Argentina’s Buenos Aires is the first provincial government in the world that set aside at least 1% of its jobs for Trans people. But Malaysia’s highest court ruled that cross-dressing is illegal under Sharia law; and Palatine, Ill., Township High School District 211 only allows Trans high school students access to private locker room space, which is in defiance of the Office of Civil Rights ruling that students have unrestricted access to the entire locker room. An Association of American Universities survey found that about a quarter of Transgender and GNC students are sexually harassed, while Trans people are executed in Iran. Clearly, we all must continue to work to increase acceptance and full human rights for Transgender people.

As a newly transitioning Transgender woman, I had encountered rude comments but several days ago I was confronted with my first official act of transphobic discrimination. I went to the post office to cash a money order. You need two photo IDs. Now, my appearance as a Transgender woman is much different than my appearance on my old ID. The clerk looked at me, looked at my ID, called me sir, and then said he would have to consult his supervisor. When she came back, I was told that since my signature on my ID card and on the money order didn’t match, they would not cash the money order. It wasn’t the signature that was the issue, it was that I am now a woman. Rank discrimination.

Another Tribal woman, Sheila Lou St. Clair, has gone missing in Duluth, Minn. Sheila has been a friend and supporter of Hildegard House, a haven for abused and trafficked women. Now her friends fear for her life. The traffickers have been killing women who rebel against them, usually by drowning them in the waters of the Great Lakes. There are criminal gangs operating networks of forced sex-slaves, mostly Native American women, from Duluth along the Great Lakes to the east coast. What has happened to the world and to journalists who might ferret out the truth about what is happening?

There is a blatant disregard for the education of Black, Latin@, immigrant and working class students here in Detroit. It seems as if, in this post-Industrial Age, there will be less need for workers, so the first to get disregarded are the students. No one is willing to admit the failure of the charter school concept, as students are not graduating more educationally prepared.

Another aspect that is totally missed is the aspect of technology and its effect on literacy. We are quickly becoming a non-reading society, which is okay if you are consigned to the sector of society not expected to contribute creatively. The rush to get tablets to second graders will be a detriment to learning, creativity and imagination. Businesses are really invested in this promotion because it creates either contracts or tax write-offs.

THREATS TO THE PLANET

Regarding “Horrors of Hiroshima linger 70 years later” (Sept.-Oct. N&L), the fear of nuclear war has tormented all my life. One of my deepest wishes and concerns is that the world should be freed forever from this horrible threat to all life on this planet. I would love to contribute in any way I can to ridding the world of these weapons of madness and hatred before it is too late.

The Democratic Presidential candidates’ debate just a few days earlier had no noticeable impact on the People’s Climate March. It is true that they contrasted starkly with the Republicans’ commitment to lying about climate change, but none of them went further than Bernie Sanders’ reformist call “to transform our energy system away from fossil fuel to energy efficiency and sustainable energy.”

An unworthy op-ed disguised as a news article appeared in The New York Times Sept. 21, “When Radiation Isn’t the Real Risk”—and it won an award, Nuclear Hotseat’s “Numb Nuts of the Week.” In the article the International Atomic Energy Agency, well known as a nuclear power booster, claims that “no one has been killed or sickened by the [Fukushima] radiation,” bundling 1,600 deaths into one cause, “stress.” And Dr. Mohan Doss, by advancing hormesis—the fraudulent idea that small amounts of radiation can be good for you—is denying science that was settled by Alice Stewart in 1957, nearly 60 years ago. Dr. Timothy Mousseau has been studying the insects, birds and mammals of Chernobyl and Fukushima, for years. They are not known to be stressed to death by evacuation orders.

In what appears to be a deeply racist statement, F.B.I. Director James Comey tried to shut down any critique of police for the slaughter of Black men, women and children. Even he had to acknowledge that he was basically pulling it out of a part of his body that was not his brain since he had no data, that is, no actual facts to back up his statement. That didn’t stop him from falsely claiming that recent criticism of the police is directly tied to an increase in crime. Why? Because according to Comey, cops don’t want to be caught on tape doing something naughty that might go viral. Wow, what a great view he has of the police if the plea and demand that Black Lives Matter, so terrifies them of some possible added scrutiny that they stop doing their jobs. Sorry, Comey, the Black Lives Matter movement opened a door that you are not going to be able to close.

Carol Dunn Carter, long-time friend of News and Letters Committees, died in Detroit Oct. 5. Born in Iowa in 1924, she came to Michigan in 1949 to care for her cousin’s baby. She continued to care for children until she married William Edward Carter, who died in 1989. She met News and Letters Committees through her activities with the Congress of Racial Equality (CORE) in the 1960s. Carol was passionate and continuously active in the fight for social justice, and active until a stroke several years ago sidelined her.