National Women’s Liberation (NWL), a Gainesville, Fla., organization, has worked closely with Redstockings of the Women’s Liberation Movement of New York, N.Y., since the 1960s. Both grassroots organizations, as think tanks that research and discuss theory and as direct-action groups, fight patriarchy and capitalism. Redstockings maintains an archive of radical feminist writing that informs their current discussions, research, and activism. 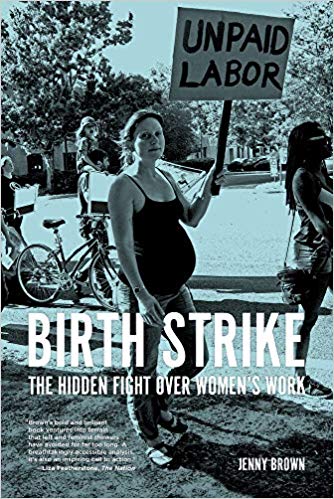 NWL assigned Jenny Brown, an NWL organizer formerly with Florida’s Alachua County Labor Party, to write Birth Strike: The Hidden Fight Over Women’s Work (PM Press; None edition, April 1, 2019). She explains it was a “group effort…from three conferences, three extended study groups, many consciousness-raising sessions, and innumerable arguments among dozens of feminist activists.” She and her comrades were inspired by Kathie Sarahchild’s 2001 Redstockings essay “Beyond the Family Wage: A Women’s Liberation View of the Social Wage.”

WOMEN NOT HAVING CHILDREN

Sarahchild’s theory that U.S. women are on a spontaneous “birth strike” was borne out by the testimonies of many women, some of which are included in the book. These come from consciousness-raising sessions, and Brown strongly emphasizes the importance of this technique. A group of women, the more diverse the better, take turns describing their experiences with an issue. Then, the group discusses the similarities and differences among the experiences, always asking who or what group benefits from the situation described.

In this case, women described not having a child or additional children because it would be unbearable under today’s financial conditions. No matter what their individual solutions regarding work, marriage, or childcare, mothers are unable to keep up with the increasing difficulties, for which they are always blamed.

Brown states that the radical feminist concept of the Pro Woman Line is helpful to understand what is going on. Blaming women for their own oppression distracts us from analyzing institutionalized problems and working collectively to solve them.

She shows how other countries have responded to the “birth strike,” that is, low birth rates, with policies of equal pay and career opportunity for women, shorter working hours, free quality childcare and elder care, paid parental leave, paid vacations, and free healthcare. Corporations and the wealthiest citizens are taxed to provide these benefits for all citizens.

Brown writes that corporations and the wealthiest 1% who openly control U.S. politicians want to keep the enormous profit they extract from workers. They force women to finance and perform reproductive work (childbirth, child- and eldercare) that benefits all society. They fund foundations promoting a smoke screen of temporary system reforms and they exploit religious Right and racist rhetoric to ban contraception and abortion.

Brown urges us to demand the corporate establishment give us the same governmental reforms as other countries. We must revive the mass movement demanding free birth control and abortion for all and make our personal “birth strikes” an effective political tool. We must fund our own organizations and not rely on government or corporations. She mentions, “Another solution is to eliminate profit-making businesses entirely, and run the society on a nonprofit basis, with all goods and services provided as public amenities.”

I hope that Brown and others will follow this thought, study Karl Marx’s work on the internal problems of capitalism, and write about replacing the capitalist system itself. Many labor and reproductive justice activists are accurate in hailing this book as game-changing because of its placement of reproductive struggles in the context of capitalism.

← Women WorldWide: May-June 2019
Voices From the Inside Out: Served the time but kept in prison →
This work is licensed under a Creative Commons Attribution-ShareAlike 4.0 International License