This is the first book documenting the history of British Lesbian feminism. Sheila Jeffreys used her own experiences and interviewed important feminists involved in the movement as well as exploring newsletters, books, and conference papers from the period. In the few books on the history of the Women’s Liberation Movement (WLM), when lesbians are mentioned, they are lumped under the struggles for LGBT rights. In reality, lesbians were central to the WLM, creating a community and a culture, not only for themselves, but for all women. The WLM depended upon institutions created by lesbians such as bookstores, festivals, conventions, and centers for survivors of rape and abuse. 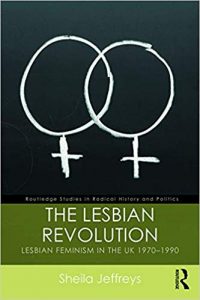 Lesbian feminism emerged from the mostly male-oriented groups like the Gay Liberation Front when lesbians discovered heterosexually-oriented radical and socialist feminisms. Jeffreys describes an exciting era of women attending feminist meetings to plan demonstrations, practice “consciousness raising” and discuss the kind of society they wanted to create. Heterosexual feminists unexpectedly fell in love with each other’s intellect and personalities and believed they had “chosen” their lesbianism.

Jeffreys explains this explosion of feminist thought and activism could not have happened without lesbian separatism. This misunderstood concept has several definitions, one being that activists focus on women’s communities, businesses, and political issues. While women support other oppressed people, only women would support women in large numbers. Also, heterosexual women and lesbians alike understood gatherings and conferences needed to be women-only for women to speak their minds without being interrupted or inhibited by what men think.

Jeffreys claims that Lesbians became the main writers of radical feminist theory since they could analyze male behavior without the defensiveness of heterosexual women. She gives a contemporary example of this defensiveness as the social media acronym NAMALT (Not All Men Are Like This). She points out that men invented the philosophies promoted in popular culture, religion, and psychology that define women as the submissive, supportive, “feminine” half of “mankind.” This normalization of dominance and submission affects all of society.

In Jeffreys’ view, Lesbians led the way in women defining themselves as complete human female individuals relating to others as equals. They created Lesbian Ethics, which thrived in university philosophy departments before being erased by corporatization and male-dominated postmodern, queer, and gender studies.

Jeffreys cites several other issues that caused the collapse of lesbian and radical feminism. While previously radical feminists had understood they would disagree and argue while analyzing reality, some heterosexual feminists began to take offense. Instead of developing their own analysis, some took the libertarian view that their personal choices should be off limits for political critique. The same was true of “lesbian” sadomasochists, who wore fetish gear and swastikas while deliberately breaking up lesbian meeting spaces and marches. Some lesbians returned to butch/femme roleplaying eroticizing dominance and submission in spite of the earlier revelation that relationships and sexuality could be based on equality. She also discusses how the fight against oppressions such as racism, classism, and ableism transformed into identity politics, which women used to attack each other.

With today’s renewed interest in radical feminism and lesbian identity, this book is vital in showing how women can come together to create world-changing political theory. It shows that attempts to derail the movement, even from within, should be expected. Jeffreys raises controversial issues feminists are still wrestling with. Hopefully, today’s concept of “radical feminism as an analysis not an identity” will make the conversation easier. Most importantly, this book shows the necessity of philosophy and theory and the importance of discussing what they mean.