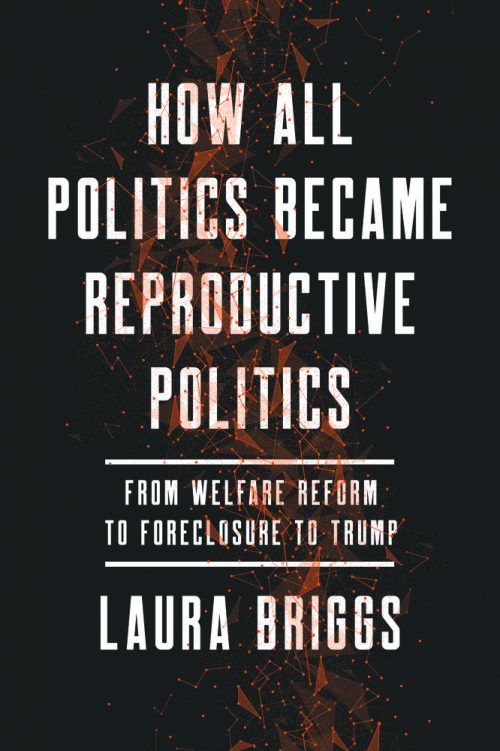 How All Politics Became Reproductive Politics: From Welfare Reform to Foreclosures to Trump, by Laura Briggs, is the second book in a series about reproductive justice by the SisterSong Women of Color Reproductive Justice Collective. The first explained that it is more accurate to view reproductive justice as the human right to have a baby or not and to raise children in an environment of safety, health, and dignity. This book discusses “reproductive labor,” “the work necessary to the reproduction of human life—not only having and raising children, but also feeding people; caring for the sick, the elderly, and those who cannot work; creating safety and shelter; building community and kin relationships; and attending to people’s psychic and spiritual well-being.”

NEOLIBERALISM IS TO BLAME

Briggs wrote this book upon realizing it is increasingly harder for parents and other caregivers to find the time and money to do “reproductive labor.” While she does not trace these problems back to the nature of capitalism, she explains them as the effects of neoliberalism.

With both government and business cutting programs that aid reproductive labor, its burden is increasingly on families, households, and individuals, especially women. As businesses pay lower wages and demand longer hours, there is less time and money to perform this labor.

Briggs cites studies showing that government funding of economic safety nets and of public works like schools is affordable and beneficial to society. When businesses cut requirements and benefits for worker health and safety and are allowed to pollute, the community suffers. However, conservatives blame feminists, single mothers, people of color, unions, and poor people for the effects of neoliberalism as an excuse to push for more of it. They often accuse them, especially feminists, of not caring about reproductive labor.

Briggs discusses how, on the contrary, the feminist movement, racial justice movements, the labor movement, the immigration reform movement, and the LGBT movement have always concerned themselves with reproductive labor.

Feminists fought for the eight-hour day, childcare, parental leave, and protections for the safety and health, including reproductive health, of women. They support child labor laws. The racial justice movements are concerned with desegregation, early childhood education, and free meals for children while fighting rape and involuntary sterilization. Many immigrants are mothers who are exploited to perform childcare at low wages while attempting to provide for their children from whom they are separated. LGBT people fought for custody of children and the right to care for partners with illnesses and disabilities.

She also explains how the propaganda of neoliberalism has interfered with the work of social justice movements. For example, many LGBT people began to fight for marriage rights rather than for solidarity with single mothers and anyone in an untraditional family.

Briggs concludes by saying we can reject this scapegoating and return to supporting the solutions proposed by social justice movements. This book is useful in explaining that we must fight neoliberalism instead of turning on each other.

← Chicago hotel workers on strike
The ‘Power of Pink’ →
This work is licensed under a Creative Commons Attribution-ShareAlike 4.0 International License