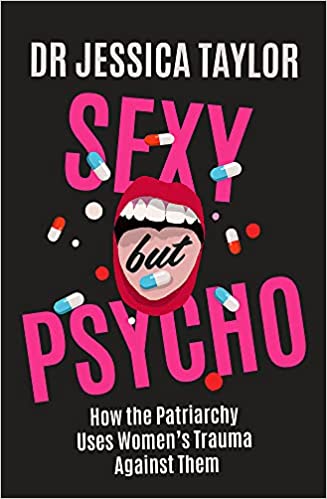 Dr. Jessica Taylor and her groundbreaking book, Sexy but Psycho: How the Patriarchy Uses Women’s Trauma Against Them, are changing how institutions and the public view the effects of trauma. Drawing upon years as a therapist in feminist rape crisis, domestic violence, and child trafficking centers, she describes staff’s success calming distressed clients and helping them live their lives after abuse. “Every behavior, thought, or feeling after distress or trauma…are either a response to what happened or a way of coping with what happened—or they sometimes can be both.” These include: “nightmares, binge eating, perfectionism, self-harm, flashbacks, headaches, hearing voices or becoming withdrawn for many years.” This is proven by feminist researchers like Dr. Alexis Palfreyman, the first to ask girls why they self-harm.

Currently, psychologists, social workers, police and the courts view these as symptoms of mental illness. Taylor states this is the biological or medical model, which claims symptoms originate in the brain and can be controlled with medication. The newer, social model emphasizes effects of abuse, poverty, oppression and other social factors. It has been absorbed by the medical model, claiming these factors cause the unproven condition of “chemical imbalances in the brain.” Medication’s effectiveness is often unproven, and side-effects severe.

Taylor relates disturbing stories from women worldwide diagnosed with mental illness when treated for abuse or attempting to report it. Diagnoses of mental illness are used to prevent women from convicting abusers or rapists, keeping custody of children, enrolling in higher education, refusing medication, seeking employment or housing, or leaving a mental health facility. Medical doctors frequently assume women’s serious illnesses and injuries are imaginary, even claiming serious abuse is self-inflicted. Misogynist stereotypes are used to silence female professionals listening to their clients and attempting to protect them from harmful treatments.

Taylor describes how psychiatry’s deeply sexist, racist, homophobic, ageist and classist roots influence today’s use of psychiatry to label all groups of oppressed people as “out of control” and innately disordered. Throughout patriarchal history, women were considered defective, inferior versions of men. Women’s sexuality and motherhood or lack of interest in these, along with all our interests and pursuits, are pathologized. Misogynist internet jokes relating women’s attractiveness to psychosis are topics of serious scientific papers. Popular culture, from t-shirt logos to movie characters, glamorize mental illness, selling “sexy but psycho” to women as a cool, daring identity.

Several feminist organizations helping abused women, including Kairos Women Working Together and Drop the Diagnoses, asked Taylor for help creating a trauma-informed practice. She proposes ways to end pathologizing of women and girls. Commission an independent inquiry into their mass medication and psychiatric diagnosis. Stop using psychiatric misinformation about mental illness and medication. Ban psychiatric accusations when women disclose abuse. Adopt a trauma-informed approach at every level of every system. Change language and narratives given to the public. Challenge and disrupt misogyny globally. Remove funding from pharmaceutical companies and invest in accessible and free trauma therapy. Provide compensation for everyone harmed by psychiatric drugs and ban harmful treatments, including psychiatric euthanasia, chemical restraints, and electroconvulsive therapy (ECT). Recognize feminism’s incompatibility with psychiatry. In the meantime, create national teams of independent, trauma-informed advocates helping patients assert their rights in the mental health and court systems.

← Freedom vs. the war against women
May-June 2022: Women WorldWide →
This work is licensed under a Creative Commons Attribution-ShareAlike 4.0 International License