We Were Feminists Once: from Riot Grrrl to Covergirl®, the Buying and Selling of a Political Movement, by Andi Zeisler (PublicAffairs, May 3, 2016).

In 1995 Andi Zeisler (pictured below) was one of the three founders of the magazine Bitch: Feminist Response to Pop Culture, still in publication. This was the era of backlash against feminism, but Zeisler “always believed that the realm of media and popular culture was where feminism would truly change hearts and minds.” Because other social movements have used this realm, which affects everyone, successfully for social change, it should be “an important arena for feminist analysis and activism.” Since then, feminism has become popular.

THE RISE OF ‘MARKETPLACE FEMINISM’

However, this popular feminism is a new version, which rarely includes analysis or activism. Zeisler calls it “marketplace feminism,” a depoliticized emphasis on personal growth and economic success that doesn’t challenge structural inequalities or any of the sexism that women face daily. It does not challenge 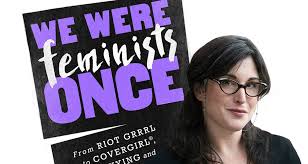 capitalism, which helps to drive the oppression of women, instead offering products to help individuals feel “empowered.”

Zeisler describes how this substitute for feminism evolved from the rise of neoliberalism as well as the increase in choices of consumer goods in the 1980s. Neoliberalism transfers economic power from the government to the private sector. It emphasizes privatization of public services, cuts government spending and regulations, and assumes the free market will determine what is valuable. It includes the notion that people are poor due to character flaws rather than an unjust system.

What often passes for feminist thought on mainstream and sometimes feminist internet sites are women’s angsty essays on whether personal choices over grooming, clothing, marriage, or caregiving make them bad feminists. This is always resolved with the notion that anything can be feminist if a woman chooses it. Zeisler traces this notion from the euphemistic watering down of the language discussing abortion rights to reproductive “choice.”

While the ability to determine the course of one’s own life is an important human right that needs to be extended to women, “choice” is now used to deny that some choices are not feminist. For example, a woman who chooses cosmetic surgery is choosing something potentially dangerous that also pressures many other women to look the same way. Most of what marketplace feminism presents as empowering choices—from products to choices about childcare—are not options for poor and working-class women.

FEMINISM DOES NOT EQUAL CONSERVATISM

Zeisler discusses how the meaning of the word “empowerment” went from structural changes, which help disadvantaged people, to feeling good about oneself. The prevalence of this new meaning leads women to believe feminism has accomplished its goals and that achieving success or safety is now strictly their personal responsibility. The fact that this gaslighting renders marketplace feminism the same as social and economic conservatism is emphasized by conservative female candidates labeling themselves as “feminist.”

Zeisler includes a well-researched history of how women have been stifled by sexism and capitalism from telling their stories through movies and TV. These industries have perpetuated the notion that women and minorities are special interest groups with nothing to say about the greater human condition, leaving that to be defined by white men. She does touch on how feminists have used the arts and media, especially the internet, to create culture and do activism.

Although some feminists have previously criticized what Zeisler labels marketplace feminism, they tend to blame the entire third-wave generation. She tells in more detail how we got to this situation while putting the blame on capitalism and patriarchy. It would be even better if Zeisler writes a sequel with as much detail about how the younger feminist generations are using media and pop culture to promote true feminism.

← Lakota protest Dakota Access oil pipeline
Fascism rising from Russia to India, from the U.S. to the Philippines →
This work is licensed under a Creative Commons Attribution-ShareAlike 4.0 International License