Transnational corporations are always looking for a cheap, a non-union work force that they can exploit and then discard when the economic situation is not as “favorable.” The Mexican government, the state government of Chihuahua and Ciudad Juarez all collaborate to supply a vast army of workers, mainly young women, to capital.

The basic wage is 77 pesos ($4) per day; you can climb up to 120 pesos, but only after several years and if companies so decide. Working conditions are determined at the whim of the employer, and even the minimum labor laws are continually violated. But maybe things are about to change as these workers are saying Ya Basta! (Enough!) 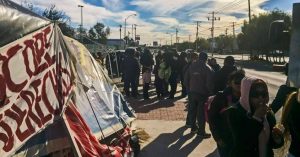 A protest camp set up by workers at CommScope, a U.S.-owned factory in Ciudad Juarez. Photo by Cuauhtemoc Estrada.

On Dec. 8, 700 workers of the U.S. company Lexmark, a manufacturer of printer cartridges, participated in a work slowdown, an extremely challenging event in a city where workers can be easily replaced. Lexmark’s reaction was immediate: It fired 75 of the workers who had also signed a petition to create an independent trade union, and even withheld their earned bonuses.

“I was fired. Human Resources told me my contract was terminated because I violated the code of conduct of the maquila, and to leave the plant because I no longer worked at Lexmark,” said Miriam Delgado, 37, who had worked more than five years at the transnational. “Why did the government allow this, if it is we workers who take Ciudad Juarez forward with our labor? They say we have to assemble 150 cartridges per hour, more than two per minute, and if not, we do not get a production bonus, of 80 pesos (under $5) a week.” The dismissed workers have kept a vigil outside the plant and are receiving support from various groups.

Lexmark workers Rosa Maria, Susana Torres and Selene Carro said in a protest at the plant:

“We organize with colleagues on the night shift who started the movement. We take turns as guards. In the morning we are four or five people, and in the afternoon we are more. We are fighting for our rights because, thanks to us, Lexmark’s profits are high.

“We want an independent union so they cannot do to us what they are doing now. We want respect not humiliation, and to stop Lexmark from doing whatever they want. We want the community to know what is happening; they support us, bring us coffee, blankets, etc. We will not move until we have an answer.”

Foxconn workers Mónica Nolasco and José Luis Toscano spoke out: “We have been protesting for a week, demanding our return to work, better benefits, better wages, an independent union, respect for our rights. We are organized in six-hour shifts, four groups, with 17 compañeros. We have suffered repression and harassment by the company. So far, we have not had a response from the company or the government. We must be united in this movement. We will stay here until they give us answers. We are asking for community support.”

Eaton Bussman workers Ermitania López Pérez, Elizabeth Torres Cruz, Antonia Hinojo and Candelario Hernández described their conditions: “We have spent two days at the camp, demanding vacation pay. Eaton is stealing our money. We are harassed a great deal. We cannot even go to the bathroom without being followed. They watch us with cameras. We need a raise. The salary is terrible it’s a shame.

“We’re 22 teammates in protest. We fight for our rights as workers. So far, there has been no positive response. We plan to be in this fight to the end. We are a small group, but determined to win this fight. At best, those inside [the bosses] have much fear, and do not want us. But we are not afraid; we will no longer be humiliated.”

CommScope worker Flablio Salas González said: “We demand the right to form a union, which is why we were fired. We ask for understanding and solidarity. We demand also respect from the company, as many colleagues have suffered sexual harassment. So we decided to get up and tell what this company has done, including their supervisors, and even their human relations staff.”