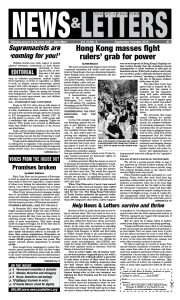 The September-October 2019 issue of News & Letters, Vol. 64, #5, is available on the web, along with several web-only articles.

View the issue online or as pdf.

Hong Kong masses fight rulers’ grab for power
An account of the development of the Hong Kong protests to block a proposed extradition bill, which could send residents of Hong Kong to face pre-determined injustice before Beijing courts, tracing them back to the 1989 Tiannamen Square Massacre.

Editorial: Supremacists are ‘coming for you!’
After revelations of horrendous conditions at concentration camps for immigrants, hundreds of immigration-rights activists and workers rally in several parts of the U.S. against anti-immigration policies, far-right actions and militarization. The El Paso massacre underscores the threat.

Editorial: Kashmir in our changed world
Statement against the abrogation of the limited autonomy of Jammu and Kashmir in India by the Hindu nationalist (Hindutva) government of Narendra Modi and his Bharatiya Janata Party.

Voices from the inside out: Promises broken
A prisoner’s critique of Wisconsin’s Governor Tony Evers’s broken promise of reducing prison population in the state to half.

Terry Moon traces the connection between mass shootings and the misogynistic, racist U.S. society. Hatred against women is so woven into the very fabric of our society that to get rid of it will take a revolution.

Essay: What is Socialism? Socialism and ecology
The last of a series of essays on What is Socialism? This time, taking on the relation of anticapitalistic social transformation and climate chaos, in order to grasp what is essential to capitalism and its destructive environmental effects, and what kind of new society can transcend that.

World in view: Puerto Ricans stand up for dignity
Gerry Emmett writes on the history leading to the recent uprising in Puerto Rico, which forced governor Ricardo Rosselló to resign.

Letter from Mexico: Chiapas Indigenous join Zapatistas
Analysis of the new moment arrived at by the Zapatista Indigenous movement, which now has 11 more units of self-government in the southearstern state of Chiapas, Mexico.

Iran workers jailed
Abbas Goya denounces the incarceration of Esmaeil Bakhshi, leading figure of the Haft Tapeh Sugar Cane factory strike, along with Ali Nejati and worker-journalist Sepideh Gholyan and the editors of Gaam, a pro-worker paper in Iran.

Mexican and U.S. teachers’ dialogue
A U.S. teacher reflects on the article “Teachers debate how to oppose ‘reform’” in Mexico and its connections with the world-historic movement of an education for freedom.

Page 2
‘Last Days at Hot Slit’
A review of “Last Days at Hot Slit: The Radical Feminism of Andrea Dworkin,” edited by Johanna Fateman and Amy Scholder.
Deborah Morris 1946-2019
In memoriam to Deborah Morris, writer, activist and powerful thinker in the women’s liberation movement and in her participation with News and Letters Committees.
Women worldwide
Feminists in Iran call on Ayatollah Ali Khamenei to resign; huge demonstrations against police rapes in Mexico; removal of the “Girl of Peace Statue” in Japan; and the trial of Canan Kaftancioğlu, the Istanbul chief of the secularist Republican People’s Party.

Page 3
Lyft and Uber drivers demand their rights!
Over 30 Lyft drivers and their supporters rallied at the Lyft office in Los Angeles for their labor rights and to reverse pay cuts forced by the company.
Prison & Cesar Chavez
Prisoner Trent brings memories of the United Farm Workers leader Cesar Chavez in connection with the Pelican Bay hunger strike.

Page 8
Creating homes for ex-prisoners
Excerpts from a talk by Terah Lawyer, ex-prisoner and coordinator of the Homecoming Project for Impact Justice that finds private homes for prisoners on probation.
UNICOR slave labor
Prisoner Pepke exposes the use and exploitation of prisoners’ labor by the UNICOR company.
Reducing recidivism
When someone is arrested again and sent back to prison after being released, it is known as recidivism, and is a huge problem. This article is part of the discussion.

Page 9
Destructive construction in Mexico
Residents from different areas of Xoco, a neighborhood in Mexico City, speak about what it means that their neighborhood is in the process of being destroyed by the “urban development” project called Mítikah.
Stonewall at 50
On the 50th anniversary of the Stonewall Uprising, Elise reflects on the situation of LGBTQ rights today.
Homeless in jeopardy
Malcolm reflects on the increasing crisis of homlessness in San Francisco after the sudden death of a homeless man at the University of California-Berkeley.

Page 10
Protests in Russia
Report on the increase of large protests and mass unrest in Russia caused by economic conditions, reports of slave labor and the government’s refusal to allow opposition candidates on the ballot for Moscow city council elections.

Page 11
San Francisco is dangerous for youth
D. Chêneville reflects on the dangerous situation youth face in San Francisco after learning that a 15-year-old he had just met was murdered.
Green Detroit!
Susan Van Gelder reports on a rally of youth, workers, and native people in Detroit demanding ”Make Detroit the Engine of a Green New Deal.”
Idle No More in San Francisco
Report on a panel discussion in Oakland, Calif., with Idle No More featuring Kanahus Manuel, organizer of “tiny house warriors” to stop the Trans Mountain pipeline.
Youth in Action
Moroccan medical students boycott their exams; boys in a New Zealand rugby team’s solidarity for the team’s one girl; and a high school senior makes a documentary film about the protest against a U.S. Navy base on Okinawa.

Page 12, World in View
Sudan and Syria test revolutionaries
Gerry Emmett writes on the crossroads reached by the Sudanese Revolution, with the accord between the revolutionary Forces for Freedom and Change and the genocidal Transitional Military Council signed on Aug. 4. He sees a parallel between the Left’s response to the Sudanese Revolution and the Syrian Revolution.
The many implications of Jeffrey Epstein
Gerry Emmett dives into the Jeffrey Epstein affair, and sees a larger story about the decadent state of capitalist society.

Web only
The revolution in Sudan is far from over
The Sudanese military and civil opposition are signing a political agreement — meanwhile the revolution is carried forth by grassroots neighborhood councils and labor organizations.
Collapse of the Radical Left in Greece
Syriza’s defeat illustrates the inevitable devolution of those who want to achieve revolutionary changes without a revolution.
Puerto Rico’s masses bring down the government
Hundreds of thousands of Puerto Ricans toppled the governor, through the unity of spontaneity and self-organization—of mass activity in unity with thinking over years.
Message to the 57th International Antiwar Assembly
Message in solidarity with the annual international antiwar assembly, stressing the full development of proletarian internationalism.

Each issue of this newspaper, like all of our literature, is meant to be the beginning of a dialogue. We look forward to hearing your thoughts on the articles you read in News & Letters, whether as comments you post on the website or otherwise.

← World in view: Puerto Ricans stand up for dignity
Essay: Black August, from 1971 to 2011-13 →
This work is licensed under a Creative Commons Attribution-ShareAlike 4.0 International License