Detroit—Detroit Eviction Defense (DED) and Detroit Will Breathe/Black Lives Matter held a rally of over 100 people near Detroit Police Headquarters on April 10 to stop illegal evictions perpetrated by the police.

In December of 2020 Ms. Whitney Burnley was forced from her home by her landlord and three police officers. They stole and destroyed her property, including her children’s Christmas gifts. There was no paperwork or advance notice, although she had text messages with the landlord showing that she had paid her rent. 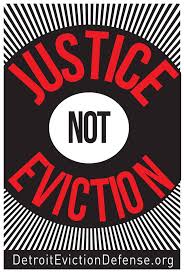 According to a DED attorney, police can remove squatters from buildings without a court order. Ms. Burnley’s landlord made this false claim after she rejected his sexual advances. DED and Detroit Will Breathe/Black Lives Matter are helping her get a new place and possessions; her furniture was in pieces on the lawn when DED activists came by that day. The United Community Housing Coalition and Lakeside Legal are trying to get compensation.

Like the “#MeToo” movement, other women have come forward about police throwing them out without paperwork; one had also refused sexual advances.

WORKING TOGETHER IN DETROIT

The Left has not done well analyzing the relations between evictions, the right to housing and the larger freedom movement, but in Detroit anti-eviction and Black Lives Matter have long worked together. It is estimated that in Detroit 40% of residents have experienced either eviction or foreclosure in the past decade.

In my senior building a woman became ill and wound up in a nursing home. Sometimes this tenant was confused, but many of her neighbors looked out for her. After the paramedics took her to the hospital, the building manager refused to tell her friends and neighbors where she was. Based on misinformation from the building manager, Michigan Adult Protective Services assigned a state-appointed guardian, who cancelled her lease without consulting her.

The building manager opened the apartment, allowing other tenants to take her possessions and threw the rest away. She rented the apartment to new tenants within a month.

A humane building manager would have helped her get a caregiver. The Tenants’ Council and United Community Housing Coalition are working on getting her compensation and a new place.

← No funding to Tatmadaw
Queer Notes: May-June 2021 →
This work is licensed under a Creative Commons Attribution-ShareAlike 4.0 International License