Los Angeles—About 50 graduate students at Caltech walked out of classes to protest Trump’s tax bill in November. Almost every grad student there has around $50,000 in tuition covered by non-taxable waivers (plus grant money for some). Under the new bill, the tuition waiver would be treated as taxable income. 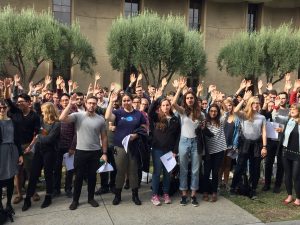 Teresa Watanabe‏ tweeted this picture writing: This is how many #Caltech students are thinking of studying in Europe if the GOP tax bill becomes law and boosts their taxes. #gradtaxwalkout #savegraded

A typical stipend of $33,000 would result in $2,900 in federal income taxes under the new bill. U.S. students’ taxes could rise to almost $12,400 and international students’ to $15,400. The cumulative effect would make grad school unaffordable for all but a tiny minority of students, according to a leaflet by the student body titled, “How does the bill affect Caltech grad Students?”

Students displayed signs on a wall with the title, “My tuition waiver let me…” One student wrote, “Eat dinner and do research”; another wrote “Live.” The bill will not allow international students to write off their expenses.

Speakers noted the U.S. will experience a brain drain. In response to a reporter asking how many students may go overseas to do their research, almost all the students raised their hands. One grad student said, they give us $20,000 for many, many hours of work. We are not here to make money but to extend research in the sciences. Another student said, “The tax cut is about class struggle, creating class warfare. They want us to pay for the rich.”

With about one fifth of undergrads still paying their loans, the tax bill is a threat to many who see their future under attack by an administration that passed a tax bill that serves the interest of the billionaire who has taken over the White House while 63% of the U.S. population could not afford a $1,000 emergency. The tax bill will add $1.4 trillion to the deficit, let alone the interest on the money that future generations have to pay. “This is a fight for people,” a student said as they gathered contact numbers to keep people in the loop for the future protests.

← Voices from the inside out: Prisoners discuss impact of 13th Amendment
Anti-war protest in LA →
This work is licensed under a Creative Commons Attribution-ShareAlike 4.0 International License