From the September-October 2021 issue of News & Letters

The Taliban’s reconquest of Afghanistan—which anyone could see coming but whose speed still took many by surprise, including the Biden administration—has shaken world politics and challenged the Left to respond in a revolutionary way.

This is not an end, but only a new chapter in the suffering of the people of Afghanistan. That was made clear by immediate resistance, including demonstrations against the Taliban in multiple cities and women demonstrating in the streets and even yelling at Taliban soldiers. 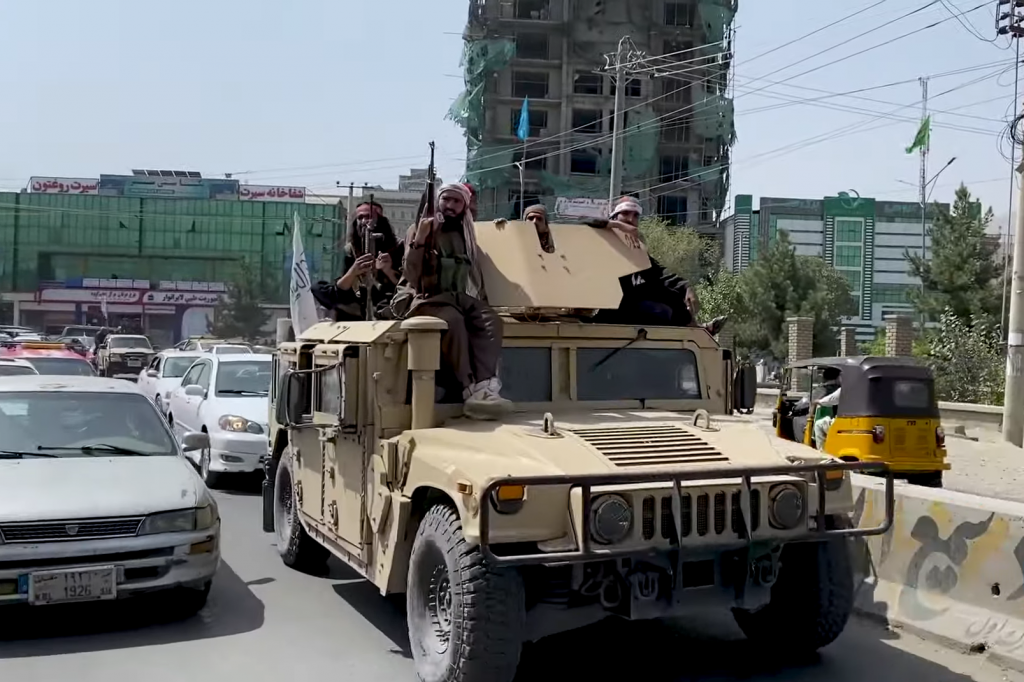 Taliban fighters patrolling Kabul, Aug. 17. This Humvee is one small part of a mountain of military hardware abandoned to the Taliban by the U.S. Photo: Voice of America

It has been equally shown by the Taliban’s repression, including shooting at demonstrators, beating people at checkpoints, torturing and killing members of the Hazara ethnic group, searching door to door in Kabul for enemies—like human rights activists and journalists. Their spokesmen’s honeyed words about peace and reconciliation cannot hide their long track record of harsh oppression of women and ethnic, religious, and sexual minorities and their violent suppression of those who challenge their dominance.

That, however, was not a consideration for the U.S., despite its rhetoric about democracy and women’s rights at the time of its invasion in 2001. President Joe Biden made that clear once again in his Aug. 16 address to the nation. In that callous 18-minute speech, he had not one word to say about the suffering of the Afghan people, whether caused by U.S. and NATO forces or by the Taliban, Al Qaeda or Daesh (Islamic State).

Aside from a promise “to evacuate our Afghan allies and vulnerable Afghans to safety outside of Afghanistan”—which was belied by the systematic rejection of visas for those vulnerable people who have been trying to flee for years and by the lack of advance evacuation plans of the Biden administration—Biden had nothing to say about the Afghan people. Rather he passed the buck to them by complaining: “We gave them every tool they could need. We paid their salaries!…We gave them every chance to determine their own future.”

The Biden administration’s disinterest in these evacuations was in total continuity with the Trump administration’s disdain for Afghanistan and any other country of brown-skinned people he termed a “shithole.” But the U.S. betrayal of the Afghan people did not begin with the Trump-Biden plans for withdrawal, or for that matter the Obama surge that Biden now pretends he did not support. From the beginning of George W. Bush’s military conquest of the country in 2001, the U.S. deliberately armed and empowered warlords and undermined Afghan women, the Left, or anyone who desired a social transformation independent of U.S. domination. (See “Afghan women pay the price for U.S. hubris,” Sept-Oct. 2021 N&L)

Even before that, beginning in 1979 the U.S., Pakistan, Saudi Arabia and China were arming the most reactionary Islamist fighters against the Communists, especially after the bloody Russian invasion. Some of these Islamists went on to start Al Qaeda. The U.S. lost interest in the country after Gorbachev withdrew. It was in the chaos of warlords battling each other after Russia’s withdrawal that the Taliban rose as a supposed unifying alternative to the corrupt factional fighting.

The tragedy of Afghanistan began really with the incompleteness of its revolution in the 1970s, which was taken over by its Communist party, which initiated the counter-revolution from within the revolution that sparked the Russian invasion in 1979.

The U.S. did regain interest in Afghanistan after Al Qaeda’s Sept. 11, 2001, destruction of the World Trade Center in New York City. The subsequent U.S. takeover of the country was justified as a “war on terror,” but also a supposed rescue of women. It soon became part of a “crusade,” whose Islamophobia was alternately signaled and denied by the Bush administration.

That crusade wallowed in imperial illusions fueled by the collapse of the USSR, which left the U.S. as the sole superpower. The whole world would be remade in the image of the U.S.—or rather in the image of exploited client states of the U.S., compliant with Washington foreign policy, and whose labor and resources would be open to exploitation by U.S. and multinational corporations.

This project, sometimes labeled “nation-building,” quickly set its sights on assimilating Iraq. The vast enrichment of military contractors in the process was a welcome side benefit, just as the impoverishment and death of hundreds of thousands of human beings was mere “collateral damage.”

The lightning collapse of the client regime in Kabul pronounced a harsh judgment on the 20 years of this imperial project that never cared about self-determination of the people. After all this nation-building, the majority of people live in poverty, most city dwellers live in slums, unemployment is around 20% (47% for young women), access to healthcare is low, one-third do not have food security, with agriculture endangered by projected droughts from climate change, and half of women have experienced violence—even before the Taliban takeover. One thing the U.S. has left to the country is a vast array of weaponry, which will now fuel violence in Afghanistan and elsewhere.

It is easy to point out the defeat of the U.S. and how it was weakened by its imperial overreach with the Iraq and Afghanistan wars and “nation-building.” Unfortunately, too much of the “anti-imperialist Left” can go no further. All they see is the defeat of imperialism; therefore they whitewash the Taliban as a “national liberation” movement. They have nothing to say about the resistance and rebellion by Afghan women over the past four decades that continues today.

Unmoved by the scenes of fleeing Afghans falling off airplanes flying out of Kabul, they express no more sympathy for the people’s actual lives than did Biden, comforting themselves with the exaggeration that “the Taliban have a lot of support in Afghanistan” (Aug. 16 statement by the United National Antiwar Coalition).

Monthly Review showed its Stalinist-Maoist inclinations by reposting on mronline.org “U.S. defeat in Afghanistan—A contrast with the Soviet experience”—an article from the vilely Assadist Consortium News. The article labeled the USSR’s war and occupation in Afghanistan a “progressive project” that deserved the same kind of international Left support as the Spanish Revolution in the 1930s, which the author, As’ad AbuKhalil, fails to note was sabotaged from within by the Stalinists.

The article has nothing bad to say about the Taliban and on women only mocks “Western media” that “bemoaned the status of women after the American departure.” Although the latest issue of Monthly Review is devoted to “The New Cold War against China,” both MR and AbuKhalil also forget to mention that China supported the same reactionary forces in Afghanistan that the U.S., Pakistan and Saudi Arabia did.

NO BANNER OF LIBERATION

In fact, the Taliban’s swift victory was won through a series of deals with side-switching warlords without regard to the people’s wishes. This lack of any concept of revolution or humanism, this void on the “Left” of a truly liberatory banner of a new human society, threatens to turn the defeat of U.S. imperialism into an opportunity for the most reactionary forces.

The weakening of the U.S. superpower creates a vacuum. What is needed to fill it are truly liberatory revolutionary movements, refusing to separate revolt from a philosophy of revolution. In their absence, what looms is not only a reinvigoration of fundamentalist political and military movements but the reactionary, even genocidal, maneuvering by Russia and China (who have flaunted war exercises in Central Asia with each other and with the region’s authoritarian regimes), xenophobic refugee-scapegoating parties in Europe and North America, and repression of social movements on the model of Syria’s Bashar al-Assad and Burma’s Tatmadaw—all of which have been flourishing under the U.S. permanent “war on terror.”

To understand the events of today and tomorrow, we invite you to read News & Letters’ coverage of Afghanistan, including:

All the readings can be found at www.newsandletters.org

← Medicare for all!
Nationwide walkout of Nabisco workers →
This work is licensed under a Creative Commons Attribution-ShareAlike 4.0 International License